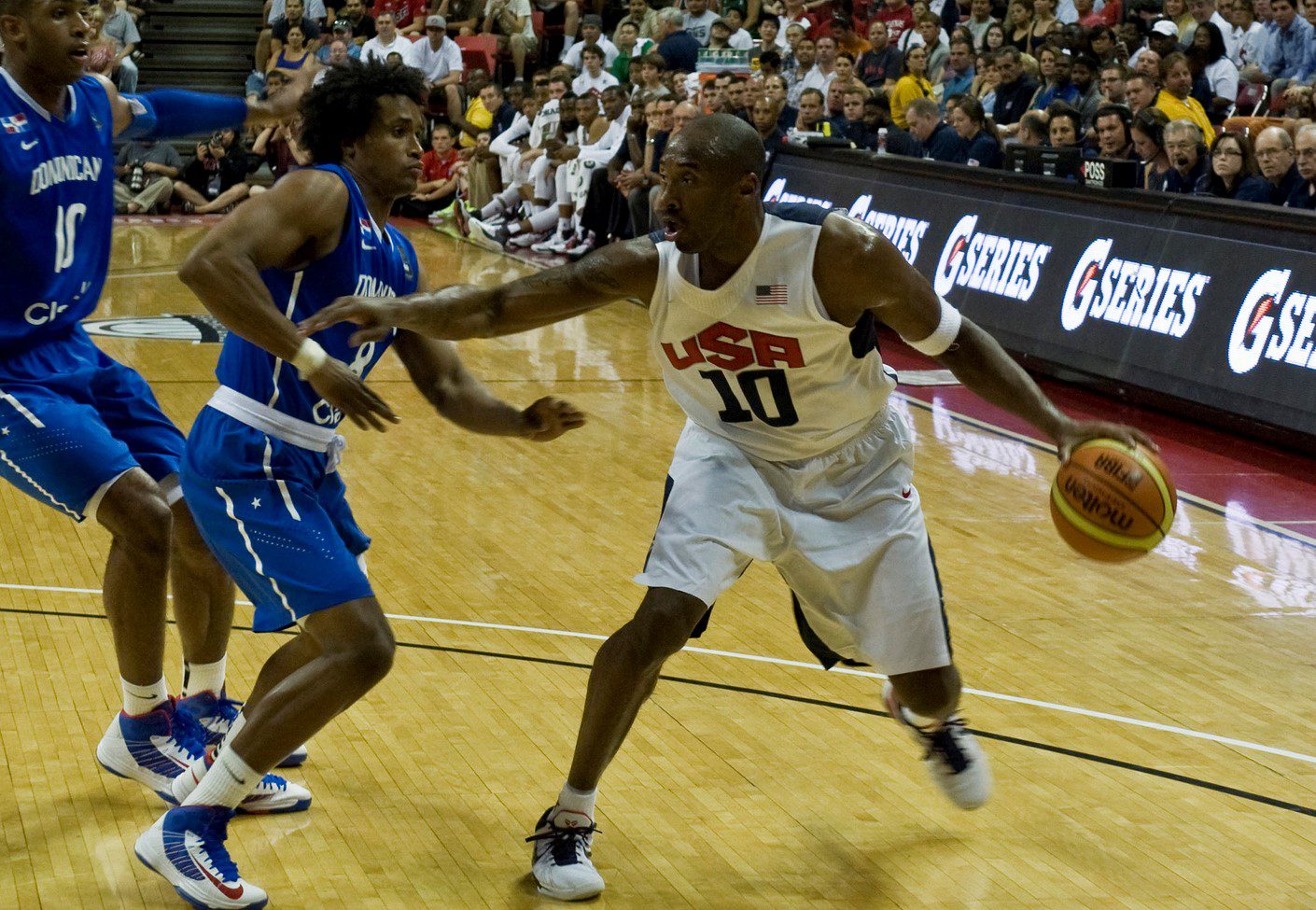 Allow me to answer the question posed in the title right off the bat: yes. Overwhelmingly yes. Yes, Kobe Bryant should play for Team USA during the 2016 Summer Olympics. And just to clear up any confusion, this isn’t like one of the many pieces that have been written that is devoted to pleading a case for how we should continue to honor Kobe’s legacy or how we should appreciate his contributions to the game even more so than we already are. Those pieces are all fine and good, and I may have to toss my hat into that ring at some point, but today I have a different goal in mind. This is instead about putting together the best and most memorable team for the 2016 Summer Olympics … maybe even one that could resemble the 1992 Dream Team.

Wait! Please, don’t leave just because I suggested that a team could possibly rival the Dream Team. Let me clear up some confusion before we go any further: It’s absolutely positively impossible that another USA Basketball Team could rival the cultural impact of the Dream Team. This has to do with the players on the Dream Team (Larry Bird and Magic Johnson, the two players who saved the NBA, plus Michael Jordan, the greatest player ever and the guy who is arguably the most responsible for the global expansion of the league, plus eight other Hall of Famers), the time period (the league and the game of basketball were gaining popularity around the world, and the Summer Olympics gave the world a chance to see the best NBA players all in one place on a team together), and for their on-court dominance over clearly inferior foreign teams, which created the notion that they were a perfect and utterly unbeatable basketball team.

I need you to trust me when I tell you that this piece isn’t meant to be a direct challenge to the Dream Team. All I’m doing is using the Dream Team as a guide, since they are indeed the gold standard of international basketball, to put together the most dominant and most culturally impactful team possible for the 2016 Summer Olympics. And in order to do this, we need to understand and follow the Dream Team model.

The inclusion of professional basketball players on the USA Basketball team was in response to the United States’ poor performance in the 1988 Summer Olympics. At this time, the college athletes were still representing the United States in the Olympics in the spirit of amateur competition, but not all foreign countries were on the same page. Shortly after the U.S. took home the bronze medal in 1988, a plan was set into action to allow for NBA players to play for the United States Olympic Team.

The Dream Team was built on the backs of Magic Johnson and Larry Bird, two legends from the 1980s that were past their prime and out of the league by the team the Dream Team traveled to Barcelona. Magic retired in the fall of 1991 after he learned about his HIV diagnosis, and Larry Bird followed suit during the summer of 1992. Even though the Dream Team wasn’t getting the best versions of Bird and Magic, they were getting two of the biggest icons in American professional sports history, arguably the two most important pieces of the Dream Team.

The next domino to fall was Michael Jordan, the undisputed Alpha Dog of the NBA and the most marketable athlete alive. Jordan was very much at the peak of his powers … he had just wrapped up a season where we won the league’s MVP, his second straight NBA Title and his second straight NBA Finals MVP. Collectively, Jordan, Bird and Magic gave the Dream Team a de facto Big Three, and the rest of the league’s best players came along shortly after: Utah Jazz duo Karl Malone and John Stockton, Chicago Bulls forward Scottie Pippen, New York Knicks center Patrick Ewing, San Antonio Spurs center David Robinson, Portland Trailblazers swingman Clyde Drexler, Golden State Warriors forward Chris Mullin, and the newest member of the Phoenix Suns, forward Charles Barkley. Oh, and Christian Laettner tagged along.

The Dream Team traveled to Barcelona and moved the game of basketball to the forefront of the Summer Olympics, a feat that had never been accomplished before. They steamrolled through the competition with flash and flair, and created a legacy that isn’t replicable, and one that can’t totally be put into proper perspective because of the circumstances of the time. They are, by any definition, one of the most successful and famous sports teams ever created.

Anyway, let’s get back to the question that incited this whole piece: Should Kobe Bryant Play For Team USA? Once again, the answer is yes. The 2016 roster pool is already loaded with young talent, and choosing a twelve man roster from this 30ish player crew will be hard enough even if we weren’t concerned with awarding Kobe Bryant a legacy spot. USA Basketball chairman Jerry Colangelo insisted that it’s not out of the realm of possibility that Kobe, a two-time Olympic Gold Medalist, could indeed make the 2016 USA Basketball Team.

With all due respect to a number of guys who are better at this stage in their career than Kobe Bryant is, Kobe needs to be on this team. In some way or another, Kobe would be this teams Magic  … an icon from an era that has just about wrapped up that rightfully deserves to go out on a gold medal winning team. I have a hard time imagining that too many people would make a fuss if Kobe was brought along as a figurehead of some sort. And if Kobe is this teams Magic, then it’s only right we bring along this era’s Larry Bird.

The most logical foil for Kobe Bryant, and the only other current player that deserves a legacy spot on the 2016 USA Basketball Team is Tim Duncan. Duncan isn’t on the list of players that will be at the pre-Olympic camp, but he has Team USA experience (he was on the dreadful 2004 USA Basketball Team that took home the Bronze Medal … it’s an understatement to say that he deserves better than that) and is just as deserving of a legacy spot as Kobe is. Duncan and Kobe have combined to win ten NBA Championships, five NBA Finals MVP’s and three regular season MVP’s. They are, by just about any measure, two of the ten greatest basketball players who have ever lived. By inserting them on the 2016 Olympic Team, we’re now beginning to see a potentially truly iconic basketball team taking shape.

After Kobe and Duncan, we dip into the pool of players who are expected to compete for Olympic spots early in the summer. If you wanted to take a look at the roster and see for yourself who has a chance and make your own selections, feel free. Truth be told, this is one of my favorite things to do. There are no shortage of avenues you could take to eventually end up with a team that makes you think to yourself, “Christ, this team is loaded,” but here is the squad I like best:

The only spot I truly struggled with was the one that Blake Griffin is occupying. There is a nice group of centers that we could choose from (including Andre Drummond, Dwight Howard and DeAndre Jordan), or a we could bring on a third point guard (most likely Chris Paul, but a healthy Kyrie Irving will draw some interest as well) or one of the best international basketball players of the last decade, Carmelo Anthony. And I haven’t even mentioned Jimmy Butler, Klay Thompson or Kevin Love yet. Like I said, this team will be absolutely, almost unfairly loaded, in more ways than one.

Then again, that’s nothing all that new. Every four years the United State trots out an All-Star heavy juggernaut that is occasionally, and usually only briefly, challenged by their competition. On the court, this year’s team can potentially end up the most stacked roster that our country has ever assembled for the Olympics. That’s because, whether some would like to admit it or not, this is a golden age of professional basketball. But bringing on Kobe Bryant (and Tim Duncan) raises this teams ceiling in a way that no amount of talent could, if that makes any sense.