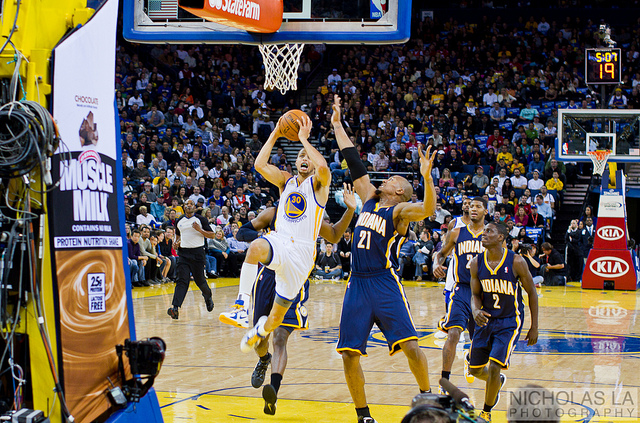 The Indiana Pacers played a hard-fought game, coming back from several large deficits with runs of their own, but ultimately fell to the Golden State Warriors, 122-110. The Pacers never led, but they came back from a deficit as large as 17 points. The Warriors always seemed one play away from breaking the game open, but Indiana found a way to come back time and time again with some strong contributions from the rookies.

The game started with a 22-8 run as the Warriors looked like they were about to blow out the Pacers. However, they hung around. Indiana was down 14 after the first, 13 at halftime, 13 after the third, and ended up losing by 12 with the last three quarters being closely contested. Besides the abysmal first quarter, Indiana kept the game within reach with a valiant effort.

Stephen Curry notched his second  triple-double of the season, scoring 39 points, hauling in 10 boards, and dishing out 12 assists, while adding eight threes. It was a near perfect game for Curry. Besides his incredible statline, he hit two half-court shots. One after the first quarter, which didn’t count. As the halftime buzzer sounded, Curry launched another from beyond half-court to hit his 200th three of the season in dramatic fashion. Klay Thompson added four threes of his own and finished the contest with 18 points.

The big storyline from the game was rookie contribution. Myles Turner dropped a career high 31 points to go along with blocked two shots and eight rebounds. Fellow rookie, Joe Young,  added 16 points and eight assists. It was a Pacers record for most points scored by a rookie duo. Paul George scored 12 points on 33 percent shooting while also getting hit with five fouls. George Hill missed the game once again due to the recent birth of a child but should be joining the team in time for their next game.

The Pacers were outrebounded by the Warriors even though they were able to dominate the paint. But it was the Warriors’ 28 fast-break points that kept them in control of the game. Indiana shot 70 percent from the free-throw line and only 17 percent from three.

Golden State will host the San Antonio Spurs Monday night in their first season matchup. The Pacers travel to Sacramento for a game against the Kings.