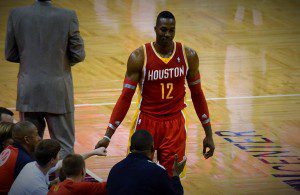 Rumors are starting to surface as the NBA trade deadline is just two weeks away, with one involving the Boston Celtics dominating the headlines on Wednesday.

The hot rumor was the Celtics and Rockets had talked about a swap for eight-time All-Star Dwight Howard. While the two teams have spoken about a potential deal, Chris Mannix of CSNNE and Sports Illustrated told 98.5 The Sports Hub’s Toucher & Rich it was a brief conversation.

“There is validity to the fact that there have been conversations between Houston and Boston. They originated with the Rockets, as sort of a temperature-taking of Danny [Ainge] and what he would give up for Dwight, but the price right now is way too high,” Mannix told T&R on Thursday. “From everything I was told, it was a short conversation.”

Mannix said former Rockets head coach Kevin McHale (fired by Houston at the beginning of the season) enjoyed coaching Howard, and as a former teammate of Ainge his opinion carries a lot of weight with Boston’s president of basketball operations. But the asking price for Howard is way too high for Boston’s taste at the moment, so the chat was a non-starter. CBS Boston