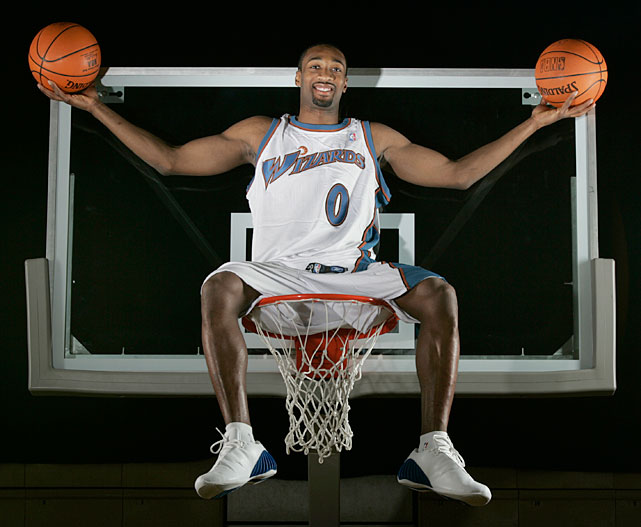 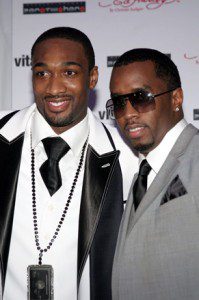 Just past midnight on January 6, 2007, Gilbert Arenas, elegantly draped in a glossy white suit, hopped out of his jet-black Lamborghini to the admiring applause and lustful screams of the approximately 7,500 men and women who had packed Washington D.C.’s Love Nightclub in celebration of the NBA All-Star’s 25th birthday.  The party – which featured hundreds of A-list celebrities, thousands of seductive women, and billions of dollars in net worth’s – was a festivity best fit for a king.  Hip-hop heavyweights like Diddy, Lil Wayne and T.I. paraded in and out of the VIP lounge.  Seemingly bare-bottomed ladies painted in leopard print danced the night away.  Star athletes in sunglasses and ghetto fabulous gold chains posted up on stage because nothing says “I’m rich and don’t give a damn” more than a pair of shades in an already dimly lit nightclub and a Ford Explorer’s worth of jewelry around your neck.

Arenas, like a fat kid in a candy store, stood in awe at the buffet of celebrities who had gathered in his honor.  Of course, they hadn’t come for free – it was reported that he spent over $1 million on the party – but Gilbert had a luxurious appetite and enough zeros in the bank account to feed it.  Monetarily, the California kid who was raised on the outskirts of Hollywood was now the purest definition of the town that rejected him as a youth.  His mansion – all 13,000 square-feet of it – was an adult playpen; complete with a $1 million pool, water slides and an indoor shark tank that required approximately $80,000 worth of yearly maintenance.  Luxury cars, imported from European countries I can’t pronounce, whipped in and out of his driveway.  With every game winning shot and 50-point performance, his sponsorships multiplied, which allowed Arenas the ability to cash out on princely pay checks that fortified his flamboyant lifestyle. 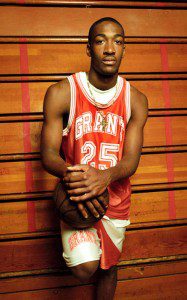 For Gilbert, this was the life he had always dreamed of; years removed from the nights he slept in his father’s blue Mazda RX-7 as a child, although, the scars he acquired along the way were still very evident.  He was one of the league’s most prominent scorers playing in the most powerful city in the world.  His face graced billboards across Washington.  His iconic number zero jersey ranked eighth on the NBA’s best-selling list that year.  And although Kobe will always be credited for bringing low-top sneakers back to basketball, it was Arenas’ “adidas Gil Zero” – released three years earlier in December 2006 – that sparked the trend.

From his play on the court to his persona off of it, everything about Gilbert was enigmatic.  Often described as comedic and vivacious, the self-proclaimed prankster admittedly defecated in Andray Blatche’s shoes, slashed Nick Young’s tires and would cut holes into his teammates snazzy, tailor-made suits, so that they’d be forced to go home in their uniforms.  As his victims seethed in fury, Arenas would fall into a spell of laughter at their expense.  “They used to make him get doughnuts, a rookie thing,” said former Warriors teammate Troy Murphy.  “I would come in early and he’d be putting baby powder [as if it was powdered sugar] on the doughnuts or licking them and putting them back in the box. He would look at me and laugh whenever someone would eat one. That’s when I shut down eating doughnuts.”

Needless to say, Arenas’ actions didn’t come without judgment; those were plentiful, his reasonings, however, were scarce.  See, Gilbert wasn’t very fond of public explanations.  In his head, it all made sense.  Or, none of it did.  “I just have a different way of approaching things,” he said.  “I’m a little offbeat.  I think of myself as the Dave Chappelle of the NBA that nobody knows about.”  At halftime, he once took a shower in full uniform and played the entire second half soaking wet.  In the offseason, Arenas claimed that he would spend eight hours a day playing Xbox Live; particularly Halo, his game of choice.  He even pitched a commercial idea to adidas about a boy in a wheelchair that clotheslines a little girl to get a hold one of his game worn shoes.  “They said I couldn’t get it.  Heh.  Impossible is nothing.” 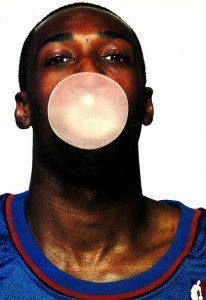 And seemingly, in Gilbert’s case, impossible was really nothing.  As a high school freshman, Arenas didn’t even start on the junior varsity team.  Three years later, he had Lute Olson and the University of Arizona banging on his front door.   After signing with the Wildcats, Gilbert was asked to redshirt his first season in favor of, former California scoring assassin, Ruben Douglas.  He declined and wound up dropping 15 points per game that year, subsequently, sending Douglas to the bench and, ultimately, to the University of New Mexico where he transferred that offseason.  And on draft night – despite having promises from two NBA teams who vowed to select him in the 1st round – Arenas fell into tears after slipping to the 31st pick.  Six years later, in his hometown of Los Angeles, he torched the Kobe-led Lakers for 60 points; meanwhile, Kwame Brown, the 1st overall pick in that infamous 01’ draft, scored just three.  “He’s one of the hardest working players in this league,” Kobe said.  “He’s earned my respect with the amount of preparation he puts into his game.  I’ve seen many come and many go.  He’s special.”

Coming from the habitually politically incorrect Bryant – a five-time champion and the third all-time leading scorer in NBA history – compliments of that enormity are few and far between.  But greatness recognizes greatness; and for all intents and purposes, Gilbert had the green light and skyrocketing down that path.  In the District of Columbia, Arenas was the most polarizing figure the city had seen since Dr. King marched on Washington back in 63’.  To fans, he was basketball’s version of “The Messiah.”  Whenever he played, they watched.  Whenever he spoke, they listened.  Wherever he went, they followed.  It’s not like the District of Columbia hadn’t seen their fair share of star basketball players.  Chris Webber and Juwan Howard – a tandem I often refer to as the “Baby Bullets” – were the second-tier reincarnation of Wes Unseld and Elvin Hayes.  For a few seasons, senior citizens like Michael Jordan, Mitch Richmond and Rod Strickland padded their stats on deplorable Wizards teams before the clock struck zero on their careers.  Unbeknownst to many, Ben and Rasheed Wallace’s first gigs in pro basketball were in Washington.  Richard Hamilton’s too.  And while all were commendable in their own rights – All-Star’s, champions, and statistical league leaders – they never captivated the city quite like Gilbert did. 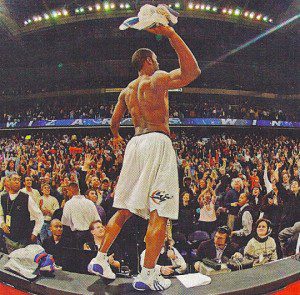 He was a man of the community; the “people’s champion” as he often referred to himself as.  Though he fronted a jocular and nonchalant façade, beneath the layers, Arenas’ core was pure benevolence.    Starting in 2006, his “Scores for Schools” program donated hundreds of thousands of dollars – $100 for every point he scored – to a deteriorating D.C. public school system that, at the time, graduated just 48.8% of their high school seniors; five percent of whom went on to graduate from college.  Every year, Gilbert spent thousands more treating underprivileged children to a Wizards game, dinner, and presents as part of his annual “Christmas Dream for Kids” event.  When Robert Suller, the Wizards’ equipment manager, needed money to purchase a customized van to accommodate his daughter’s special needs, Arenas extended a helping hand and donated his entire playoff bonus to the family.

In Washington – a region with approximately 120,000 impoverished residents and the highest food stamp use percentage in the United States – Gilbert’s acts of compassion and philanthropy made him divine amongst the city’s streets.  Like so many of the city’s youth, he too had grown up in a single-parent household with an inadequate level of financial expendability, but was living proof that fairy tales existed; that the “American Dream” was still very much alive.  “When I leave the NBA, I don’t want my legacy to be, ‘He won a championship ring,’” Arenas said.  “I want my legacy to say: ‘He played for the people.  He gave everybody in the world hope that they could be just like him.’”

Exactly three years later, on January 6, 2010 –  his 28th birthday – Arenas was suspended for reasons that most people, to this day, have difficulty grasping.  Since then, a countless number of stories have circulated; none of which accurately portray the man that the city of Washington had fallen so deeply in love with.  As the years go by and our memories begin to fade, sadly, many will remember Arenas as no more than a suicide bomber; someone who destroyed his own career and brought down the Wizards organization with him.  In Washington, though, Gilbert’s lasting legacy will be that of a hero; a provider; a savior.  He fed the poor and provided direction to the misguided.  He never walked on water, but in 2007, you couldn’t have convinced the city otherwise.  “It sucks the way the world works. You can do a hundred things for people, but you do one bad mistake and everyone crucifies you and that’s all they want to remember,” Arenas said.  “Before that incident, I was the people’s champion, God’s gift to all fans, gave fans everything.  I’ve hit big shots. I’ve had my moments. Hey, everyone can’t win a championship, but I had fun. I got to play the game that I always dreamed of, and I did it more than I expected it. That’s how I look at it now.”