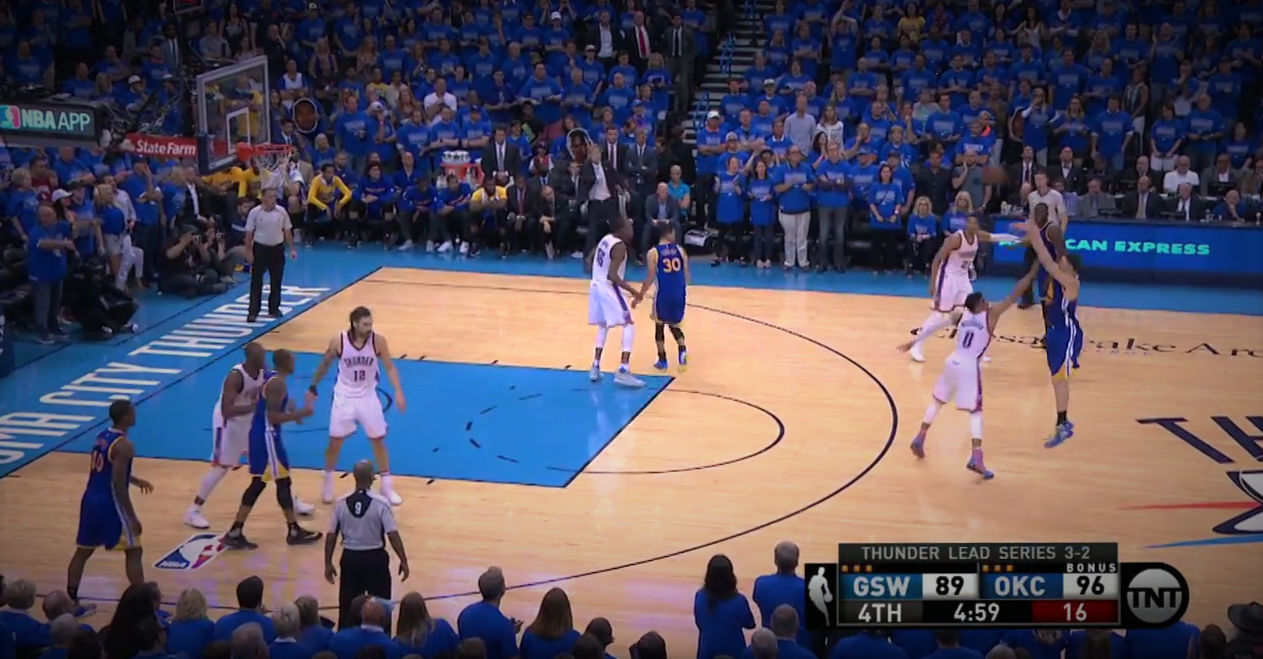 Klay Thompson refused to allow the Golden State Warriors to lose. It was clear in Game 6. With the defending champs in a trailing position for the majority of the contest, Thompson began drilling deep threes without hesitation or doubt.

The final score was 108-101. But don’t let that summarize what occurred in Game 6. The Oklahoma City Thunder could’ve tasted the NBA Finals. Steph Curry had no first quarter points, the OKC crowd was near deafening, and the Thunder managed to be in control of the game for almost 48 minutes.

What OKC didn’t do, however, was put the Warriors out of striking distance. And we all know Thompson isn’t afraid to strike. In a record-setting performance for threes made in a playoff game, Thompson went 11-18 from deep (14-30) overall for 41 points. His threes were an array of shooting excellence – some were exceptionally deep, others were contested, a couple were even off balance. The Warriors and its repeat quest would’ve been buried if not for Thompson having a superhuman effort in the fourth quarter.

He wasn’t alone. Stephen Curry had one of his strongest floor games of the playoffs – 31 points, 10 rebounds, 9 assists. Despite a sluggish feel to his game throughout, the back-to-back MVP came alive in the fourth once Thompson set the “refuse to die” tone. He finished 6-13 on threes and was hugely instrumental in joining his fellow Splash Brother on the path to this epic comeback.

No one else on the Warriors was particularly strong offensively, although Draymond Green did appear more like himself than in his forgettable West Finals games. Green had a 12/12/6 line. He erupted in emotion (yelling, mostly) as the Curry/Thompson explosions turned the distant thought of winning into a reality.

And we can’t dismiss the defense of Andre Iguodala, a locked in showing that helped shut down the likes of both Kevin Durant and Russell Westbrook in crunch time. Iguodala stripping Westbrook and finding Thompson for a transition three to take a 104-101 lead was my favorite play ever witnessed in my life as a GSW fan.

Take your pick of bench player who struggled. Be it Shaun Livingston, Marreese Speights, Festus Ezeli, or anyone else, no one aside from Iguodala did well off the bench. Here’s to betting that changes in Game 7 at home.

For the Thunder, there’s plenty of regret to be had. Game 7 will inevitably come, but no one can argue that Game 6 was its best chance of reaching the NBA Finals. Durant had the volume shooting of volume shooting games (10-31 overall, 1-8 on threes). Westbrook had multiple late-game turnovers during his 10-27 (0-5 on triples) game.

It was instantly discernible toward the end of the fourth how OKC lost its composure. They resembled the Warriors in Games 3 & 4, stunned by the play of its opponent and unsure of how to find a rhythm. Durant/Westbrook continued missing jump shots as the home crowd grew anxious. Put in simple, easily understood terms, OKC let this game slip away.

Beyond OKC’s Big Two (who had their own issues), no one else stepped up. Serge Ibaka had 13/9, a seemingly good line, but he was nowhere to be found in the second half. Andre Roberson struggled with foul trouble in spite of putting up 11 points. Steven Adams didn’t impact in the game in any special way over the course of his 28 minutes.