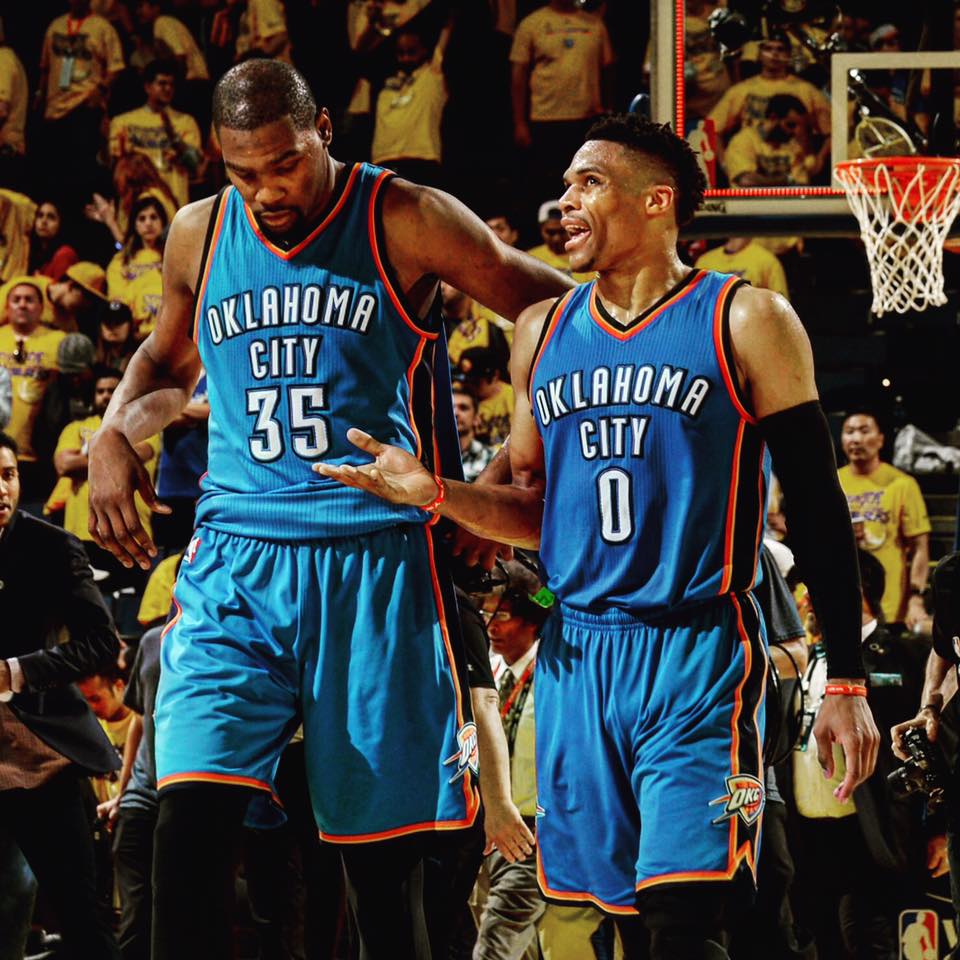 In response to Game 6 of the Western Conference Finals (AKA: the most tense, highest stakes non NBA Finals game of the 2000’s) and in preparation for Game 7 of those very same Western Conference Finals, I’ve decided to re-write/reconfigure my Legacy Watch list from less than two weeks ago to reflect everything that has happened in this back and forth, borderline incomprehensible series between the Oklahoma City Thunder and Golden State Warriors.

So in reverse order, here are the guys who have the most on the line in Game 7 tonight.

SIDEBAR: Figuring out the order of this list was the hardest shit ever. Seriously, so many dudes legacies will be altered one way or another because of whatever happens in Game 7. And if it manages to somehow top Game 6 from a drama standpoint then every atheist out there needs to take a time-out because clearly there is a God who lives in the heavens above and he really does love us all so damn much.

Here’s the way I look at it: Durant and Westbrook are going to empty their respective clips in Game 7; they will collectively win the game for OKC or shoot them out of it. That’s been the case in just about every game so far this series. I don’t trust any other perimeter player for the Thunder, so that means OKC is going to need Ibaka or Adams to play the game of their life. From Ibaka they’ll need one of those games where he hits some three’s and patrol the paint. Essentially, the Thunder need the version of Serge Ibaka that they anticipated would develop when they traded James Harden and banked on Ibaka becoming close enough to an equal to Durant and Westbrook that he was qualified to round out their own Big Three.

Adams has already surpassed all possible expectations that anyone within the Thunder organization could have set for him when he was drafted in 2013, and he’s ahead of Ibaka on the OKC totem pole. He’s their best and most important big guy, more vital to the Thunder’s success in Game 7 than anyone not named Durant and Westbrook. He needs to match Draymond’s intensity, control the glass, and set an emotional and physical tone for the game, which is even more important with Oklahoma City on the road. Like I said two weeks ago, Adams isn’t far off from single-handedly swinging the the popular opinion of the Harden trade in Oklahoma City’s favor.

From Game 2 of the Spurs series up until Game 5 of the Western Conference Finals Donovan was brilliant. He outcoached Gregg Popovich and took it to Steve Kerr. He pushed all of the right buttons; finding success playing big against the Spurs, then flipping the script and beating the Warriors with small-ball. And then in Game 6, all of OKC’s regular season issues reared their ugly head. Donovan left Andre Roberson on the bench with five fouls for too long, even though they needed his length and athleticism and defense when the Warriors were hanging around in the 4th quarter. He wasn’t able to carve out any time on the bench for Westbrook and Durant in the 2nd half, and it showed down the stretch when their offense became a predictable dumpster fire and Durant and Westbrook both looked gassed.

Without momentum and on the road, this will be the biggest test of Donovan’s coaching chops yet. If the Thunder sneak out a win at Oracle we’ll forget about Donovan’s shortcomings in Game 6 overnight. If the Thunder lose but keep it competitive, the Game 6 collapse will be written off as a momentary lapse that was among many factors that kept the Thunder from closing out the series at home. If the Warriors cruise to a commanding victory the whispers of whether or not Donovan can make the adjustment from college to the NBA will grow louder. I don’t necessarily think that chatter is justified, but you know how this shit works.

If the Warriors come back from 3-1 down it shows that Kerr’s coaching chops go far beyond the X’s and O’s that propelled the Warriors from fringe contender during the Mark Jackson era to an all-time juggernaut under Kerr. Only nine teams ever have come back from 3-1 down in a best of seven series, so even if your roster is filled with competitive gamers who don’t really give a shit about past results or overwhelming odds, you can’t have just any stiff rallying the troops on the bench. Kerr’s Popovichian poise after two blowouts in Oklahoma City has been as impressive as any other individual performance in the postseason. He never flinched. He didn’t blink. And neither did the Warriors. Absolutely incredible.

Remember when teams used to punt or kickoff to Devin Hester and he’d take it to the house and then announcers would be like “Don’t kick to Hester!” Well there’s a rule that’s somewhat similar in the NBA … “Don’t iso against Iguodala!” Iggy’s Game 6 was probably the best Not Statistically Impressive, But Sneakily Awesome Game game I’ve ever seen a dude play. His defense was just insane down the stretch (in iso situations, he stopped Durant and Westbrook twice each in the final two minutes of the game) and he even got a big time finger-roll finish to tie the game with under two to go after OKC had just scored.

Iguodala is the sort of two way difference maker that isn’t one of the teams three best players that every great team needs to have real success in the postseason. The Lakers had it with Robert Horry. The Heat had it with Ray Allen and Shane Battier. You just need veterans that have a flair for the moment. Remember the two clutch free throws Iggy hit to send the game to overtime when Golden State played in Oklahoma City in the regular season? Are there any other 61 percent free throw shooters who sink those as coolly as Iguodala did? Are there any other guys in the league who come up with four stops on four straight possessions like Iguodala did on Saturday night? I doubt it.

I’ve got a sneaking suspicion that we’re going to see the much anticipated Draymond Green Game tonight. You know the one I’m talking about; 17 points, 14 rebounds, 8 assists, 4 steals, 3 blocks, and a whole bunch of screaming and flexing and hollering at everyone and no one in particular. He’s due for one this series, and if we’re going to continue to call Draymond the heart and soul of the Golden State Warriors then that means it has to happen tonight. No exceptions.

I can’t recall a single performance making as large of a difference for the legacy and perception of a number two scoring option as much as Game 6 did for Klay Thompson. In one game, a game which Klay broke the NBA Playoff record for three-pointers in a game, he solidified himself as the second greatest shooter ever (to anyone who is putting Klay ahead of Steph, let’s take it easy and shelf that discussion until Klay can shoot off the dribble as well as Steph could) and forever locked in the “Splash Brothers” as the only possible choice for best shooting backcourt ever. If there was even any doubt left, Klay wrestled away the “Undisputed Best Shooting Guard in the League” championship belt from James Harden and has a death grip on that sumbitch until further notice. And because of his defense, Klay has now been grandfathered into any conversation about the best two way players in the NBA. The Warriors have three guys that you can mention in that conversation.

So where does he go from here? A thirteen three explosion … a 2 for 12 stinker … something right in the middle? I just know I’m prepared for almost anything from Klay Thompson in Game 7.

Everyone was quick to call for the demise of Stephen Curry and the Golden State Warriors the Dubs were blown out in Oklahoma City in Game 4. The Warriors were done, Steph was overrated, the unanimous MVP vote was fraudulent … how drastically things can change in less than a week. The unanimous MVP has answered the bell, tossing dagger after dagger at the Thunder while delivering two masterful 2nd half performances in back to back must-win games, and now we’re right back to square one: Stephen Curry is on the cusp of reaching a degree of superstardom that only a handful of professional athletes ever have before.

A win puts the Dubs back on track, just four victories away from immorality. A loss means that this will forever be considered a season wasted and one of the biggest “he came up short” tales in sports history, whether Steph scores 50 points or 5 points in the deciding Game 7. There’s probably not a bigger difference between the ceiling and the floor for any individual on this list.

Two weeks ago I promised a big exploratory piece on the Durant/Westbrook partnership. Instead I wrote about how intoxicated I would have to be to confidently wear any of the apparel Russell Westbrook has worn before and after games out in public. That big piece on Durant and Westbrook is coming, I promise you. For now, just know that their partnership in on trial in Game 7, and it’s one of the biggest fork in the road moments in NBA history.