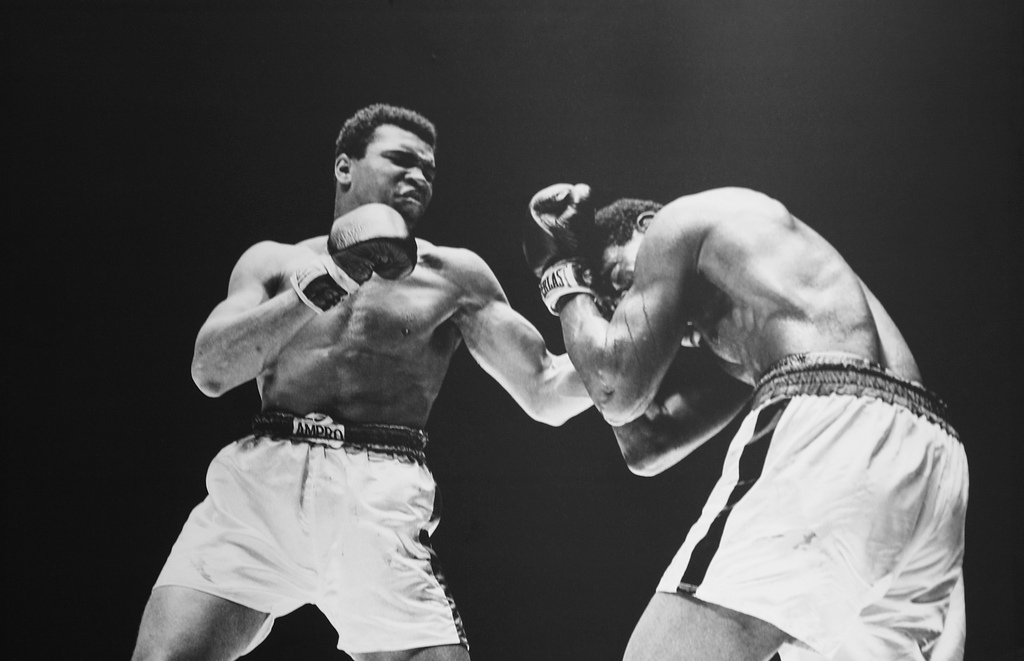 It was 1964 at Miami’s 5th St. Gym and a date with Sonny Liston awaited. Ali was Cassius Clay back then. Writers called him the Louisville Lip. Liston was Ali’s first foil. On February 25, 1964 Liston refused to answer the bell to start Round 7, and the legend of Muhammad Ali commenced.

Sonny Liston was a scary man. His sour disposition and reported mob ties inspired fear in fighters and the public. Clay’s antics (driving to Liston’s house and calling him out at 3 a.m., poetry describing Liston’s maiden extraterrestrial voyage, the weigh-in) finally endeared Liston to boxing’s white audience. They wanted him to shut up this young, brash, cocky African-American.

Instead, Clay won, the next day changed his name to Cassius X, and a week later became the man we know as Muhammad Ali. Malcolm X brought Clay to the Nation of Islam and gave us Ali.

The name Muhammad Ali means “One worthy of praise.” Ali made sure praise came his way. This is the best place to start with Ali.

Regardless of race or gender, all athletes owe unrepayable debts to two athletes: Jackie Robinson and Muhammad Ali. Robinson eliminated any counter argument against diversity in sport. Ali allowed athletes to be human. By no means is this the first time anyone has had this take or published this idea. There is no new ground to unearth here.

Ali’s rejection of his birth name and embrace of Islam scared the hell out of White America. The rest of his boxing career showed White America’s discomfort with Ali’s rejection of traditional American tropes. Ali’s heavyweight title was won before the Civil Rights Act of 1964 became law. The heavyweight champion of the world was not allowed to use the same bathroom as the people writing about him.

The name is where Ali’s rejection of society’s narrative begins. Ali blazed a trail for other athletes to be themselves. There’s no Allen Iverson without Muhammad Ali. Nor is there Kobe Bryant, Kevin Garnett, Shaquille O’Neal, Charles Barkley, or any other basketball player who dabbled in controversy for simply being true to themselves. For those men to have their careers, Muhammad Ali had to reject Cassius Clay.

No examination of Ali’s legacy is complete without his refusal to fight in the Vietnam War. Ali the boxer was a showman who talked his way into making his fights the biggest shows. Ali’s refusal to serve in the military meant he was no longer just an athlete. Ali became a Civil Rights figure with the same stature as his former mentor Malcolm X along with Martin Luther King Jr., Medgar Evers, and others. Ali’s reasons were rooted in the NOI’s teachings about the exploitation of African-Americans by White Americans.

Ali spoke out and the crux of his irrefutable argument was North Vietnam did not force him to use separate bathrooms, didn’t lynch his people, didn’t remove his people from one land to place them in bondage in another, and didn’t perpetuate a society where inferiority was a simple matter of skin color.

These are irrefutable facts. Ali forcefully articulated them. Americans resented Ali because he refused to fight for such tropes as “Freedom” and “Democracy.” When Ali won the Gold Medal in 1960, it didn’t matter. When Ali beat Liston both times, it didn’t matter. The bottom line is nothing Ali could do would transcend the fault lines of racism complicit in building America. Why should Ali fight for a country routinely marginalizing him because of his skin color?

The heavyweight champ refusing to surrender his conscience to a hypocritical society earned great ire. Few athletes since Ali have taken such stark positions as a matter of principle. Michael Jordan famously refused to wade into controversy because 50 percent of the people who buy his sneakers are Republicans. LeBron James and the Miami Heat took a picture wearing hoodies and he also wore an “I can’t breathe” shirt yet when asked about the Tamir Rice case – the most flagrant abuse of police power in his city of Cleveland – he demurred because he didn’t “have all the facts.”

Ali surrendered the best years of his career fighting injustice and was jailed as a matter of principle. He took a stand and surrendered untold amounts of money. Think about this – if Ali was allowed to fight instead of being turned into an example how to dissenters are punished then Ali may not have been exploited at the end of his career due to financial instability.

In the end, the government got their pound of flesh.

The misdirection of history is Ali was hated because of his brashness. Wrong. The public hated Ali’s unrepentant rejection of the American fallacy foisted upon him. From rejecting his name to the tall tales of American life, and concurrently, White America, Ali inspired the enmity of his ignorant countrymen. Ali’s wit and charm were blunted at the time but today are part of his legacy.

Ali never feared in telling us how great he was. Or how pretty. Or how fast. Or how strong.

He spun tapestries involving training with cetaceans, reptiles, along with altering weather patterns prior to the Foreman fight.

Joe Frazier became “The Gorilla”, Sonny Liston was “The Bear”, George Foreman was “The Mummy.” Not all of Ali’s talk was fun, particularly he expressed regret about Frazier. Ali also talked DURING fights. Foreman tells the story about how he hit Ali with all he had, and Ali taunted him by saying “Is that all you got George?”

Ali invented trash talk the way Edison invented the lightbulb and Socrates invented philosophy. There are some pretenders to the throne, but Ali’s fights were secondary to the theater. Except the theater always had a purpose – besides goosing the purse. Ali’s mastery was psyching out his opponent. When he caused a near riot at the weigh-in for the first Liston fight, his pulse was 120 and blood pressure 200/100. Liston was shook. Ali later said that Liston wasn’t afraid of Clay, but he was afraid of a nut. An hour later Ali’s vitals were normal.

Prior to the Foreman fight, Ali arrived in Zaire and immediately had the Congolese natives chanting “Ali bomaye!” The Lingala translation to English is “Ali kill him!” Everywhere Foreman went in Zaire the chant followed. Ali delivered one of his great speeches on fight preparation, “I wrestled with an alligator, I tussled with a whale, handcuffed lightning, thrown thunder in jail. Only last week I murdered a rock, injured a stone, hospitalized a brick, I’m so mean I make medicine sick.”

Everyone picked Foreman. Ali was older, Foreman was young and knocked out Joe Frazier. Ali’s psychological warfare was remarkably effective. After the fight he said his goal was to get under Foreman’s skin and make him fight harder and sap him of his energy. During the fight, while taking numerous thudding blows, Ali would lay on the ropes and just keep talking. His rope-a-dope strategy worked.

Ali was made for television and had the perfect foil in Howard Cosell. Tape of Ali being boring is like the Yeti. He continually stimulated, challenged, and enlightened with his words. Ali’s talking legacy is found throughout sports – Larry Bird telling other Three-Point Contestants, “You’re all playing for 2nd”; Patrick Roy telling Jeremy Roenick that he can’t hear what he’s saying because, “My two Stanley Cup rings are plugging my ears”; Reggie Miller’s theatrics against the Knicks; the list goes on.

Ali transcended titles. To call him an activist, athlete, orator, Muslim, or any other singular title is to not fully comprehend all that he was. Ali was not perfect, he was like all of us – incredibly complex and interesting. Yet we got to know Ali – warts and all.

Today, we know more than ever about our athletes. We follow them on social media and media availability is a requirement. But we don’t know Michael Jordan, LeBron James, Stephen Curry or our athletes like we know Ali.

That’s probably a good thing. Ali’s legacy is more impactful because of how deeply we knew him.

There are two quotes to remember Ali by – this is how he wanted to be remembered: “I’d like for them to say he took a few cups of love, he took one tablespoon of patience, teaspoon of generosity, one pint of kindness. He took one quart of laughter, one pinch of concern, and then, he mixed willingness with happiness, he added lots of faith, and he stirred it up well, then he spreads it over his span of a lifetime, and he served it to each and every deserving person he met.”

The quote most accurately surmising Ali’s legacy was after the first Liston fight. Overcome with the joy of victory, Ali exclaimed, “I shook up the world!”

You did Champ. As-salamu ‘alaykum.