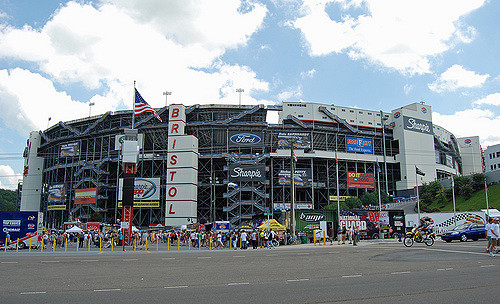 The outcome of the game met college football betting predictions, but not necessarily the record this game would break. On Saturday, college football had the largest crowd when the Tennessee Volunteers played the Virginia Tech Hokies. The game was held at the Bristol Motor Speedway, which is used for NASCAR racing, and is about 100 miles from each school’s campus. According to reports, the game, which was dubbed the Battle in Bristol, entered the Guinness Book of Records after drawing a crowd of 156,990.

While the game between the Volunteers and Hokies broke the attendance record for college football, promoters believe they barely scratched the surface. Michigan State athletic director Mark Hollis said he believes the site will attract people to come witness something they have never done before.

The idea of hosting professional and collegiate games at a neutral site isn’t something new, but it has been gaining a lot of momentum lately. The NHL has its annual Winter Classic, where two teams play a game outdoors instead of the regular stadiums they play in. The Winter Classic has been a hit since it started a few years ago and attracts both casual and hardcore fans to the event.

The question now is, can the success at Bristol be duplicated without it getting old?

After Saturday’s success, it is safe to assume Bristol Motor Speedway will host another major sporting event in the near future, but the trick to avoiding being stagnant is to make sure it’s not something that happens too often.

The NHL’s Winter Classic is held once a year, as are the college basketball games played at special venues. Having these events once a year helps to maintain some intrigue about them. If the people in charge of the Bristol Motor Speedway can follow the examples set by other organizations, they should be able to keep fans filling up the track for quite some time. However, if the events are held often, it loses its mystique, which will lead to low attendance and general disinterest.

One of the fears that some college football coaches have is that these types of special games could take away the special aspect of going to an opponent’s stadium to play games, especially for players that haven’t played at some of the big college campuses before.

Virginia Tech head coach Justin Fuente hopes that these events don’t occur very often because he doesn’t want his players to miss out on the real college football experience and atmosphere. However, he doesn’t think one game a year at a special venue will hurt any team.

Now that Bristol has opened the door for a NASCAR venue to be used to host a college football game, other NASCAR venues like the Daytona International Speedway will be looked at as potential venues to host future games.