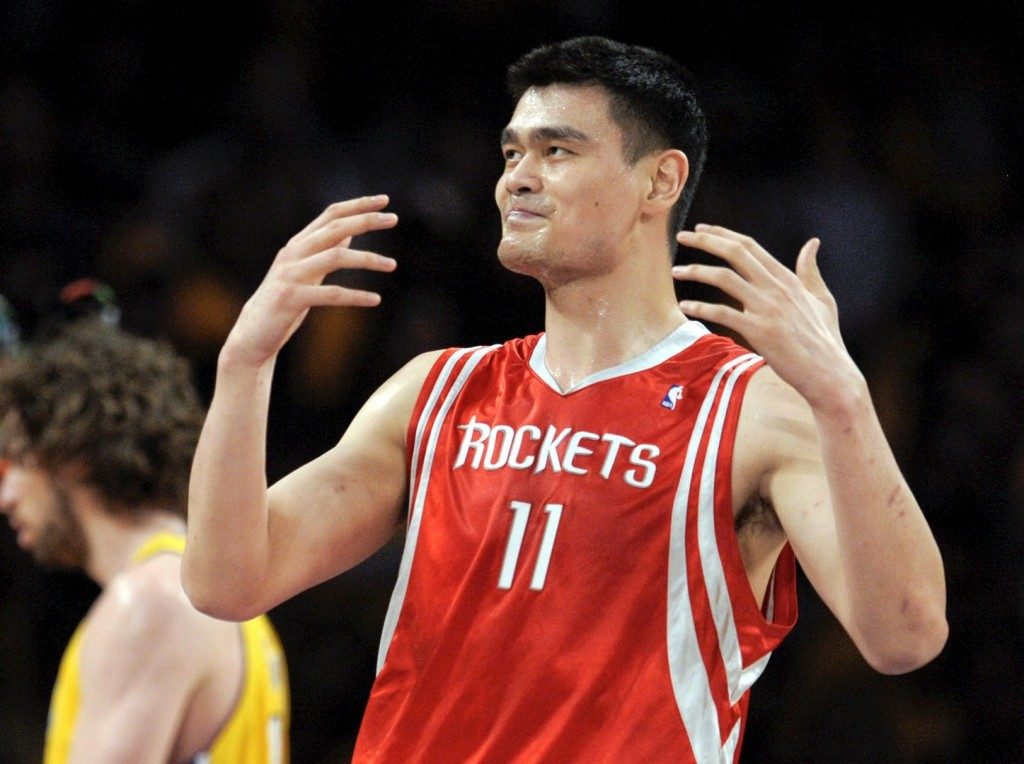 Don’t get it twisted … that wasn’t meant to sound like an indictment of Yao’s career, or a suggestion that his career was some sort of failure. It’s actually quite the contrary. Considering all of the variables, I think you could make a case that Yao Ming actually exceeded any realistic expectations throughout his career. You have to consider the weight of the expectations that were placed on Yao’s massive shoulders before he ever even played a regular season NBA game. In the most simplistic way possible, it’s necessary to evaluate who Yao Ming is, how he’s built, and why he’s important in the grand scheme of things:

Yao Ming was a basketball player from China, and when the Houston Rockets selected Yao with the 1st overall selection in the 2002 NBA Draft, it made him the first international player to ever be selected No. 1. The biggest reason (no pun intended) why Yao was selected 1st was because he is in fact a gigantic human being. Standing at 7 feet, 6 inches tall, Yao Ming is one of the five tallest players to ever play in the National Basketball Association, and that likely qualifies him as being one of the five tallest people to ever walk the earth. As I’ve already mentioned, Yao is Chinese, and China doesn’t have a rich basketball history. However, China is an absolutely massive country in terms of geographical measurement, worldwide influence, and population. The people of China now had a tremendously well-known countryman playing in the most marketable sports league in the world, and despite the fact that he had never played against NBA competition, there were already unfairly high expectations on Yao by pundits and Chinese fans alike (days before Yao made his NBA debut, he was featured on the cover of Sports Illustrated with a title that touted him “The Next Big Thing,” which was a word-for-word hijacking of Brock Lesnar’s nickname at the time, but whatevs). 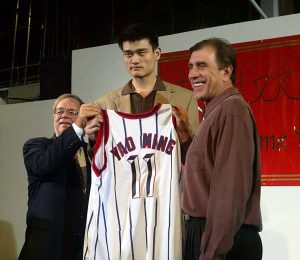 Because Yao was literally and figuratively larger than life before he even played an NBA game it’s been nearly impossible to gain any sort of proper perspective on who he was as a player. Even to this day, five years after he retired, it’s still difficult to have an understanding of how we should consume Yao’s career. Yao played only eight seasons, and in his four peak seasons he missed nearly 100 total games. If we could play the “What If” game for just a moment, it’s interesting to think about what if Yao Ming stayed healthy, and produced at this level over 13 years rather than eight. Add in one or two deep Playoff runs and a few marquee postseason moments (poor Yao never made it past Round 2 in the postseason, and when he did get to the 2nd Round he missed the last three games of the series due to a hairline fracture in his left foot), combine that with his year-to-year consistency and his off-the-court presence/clout and suddenly we’d be talking about one of the twenty best guys in the 21st Century. It was all there.

Yao will never get enough credit for being as skilled as he was; this is just par for the course when you are blessed physically in a way that others aren’t. When Yao entered the league in 2002 he moved better than anyone will remember and he already a marksman mid-range. By NBA standards, his post-game was primitive when he came into the league, but in just a few short years he was a bitch to stop on the block. He turned a nice shooting touch into a reliable turnaround jumper in the post. As soon as he developed some moves and counter-moves, and once started getting a little more physical with defenders on the block he turned into a very effective scorer in the paint.

The biggest problem never played with a point guard who would make it a priority to get him all of the touches he needed, or a perimeter player at the right time in his career. Steve Francis was a heck of a talent, but you could hardly call him a “pass-first point guard” and he caught T-Mac a year or two too late. Houston’s offense should have ran through Yao exclusively on the block or in the post; just think how Memphis uses Marc Gasol, and imagine a more skilled version of Marc Gasol doing a bunch of Marc Gasol things. Yao was too efficient of a scorer, and too skilled/willing of a passer for it not to. He definitely needed a reliable perimeter scorer to carry the offense for stretches and get buckets late in games (it just wasn’t in Yao to be the alpha dog for 48 minutes) but Francis definitely wasn’t that guy, and McGrady wasn’t anymore.

Despite the shoddy supporting cast, Yao had stretches where it looked like he was ready to get to another level. After the All-Star break in 2006 Yao averaged 26 points and 12 rebounds per game over 25 games; if it were a certainty at that point that he could have stayed healthy for the next six years you would have had to replace Yao’s ceiling with a retractable roof. Unfortunately, he broke his left foot, the first of multiple times. If you wanted to try to simplify Yao’s career, the best way to do so would probably be like this … he had every tool imaginable except cooperating lower limbs.

It’s a shame too, because when Yao came into the league, prior to all of the injuries, he wasn’t moving like a mummy. For a dude that is 7’6″ he was actually very mobile. You know how everyone was shocked at how well Kristaps Porzingis moved and how well he handled the pace of the NBA game? That’s how it was re-watching Yao play. I almost forgot that before he broke his foot the first time he was actually running the floor, covering ground defensively, etc.

Yao’s numbers are favorable compared to other centers he played against, and they hold up well historically too. The only player that was 7’0″ or taller that shot a higher free throw percentage than Yao was Dirk Nowitzki. Among all players at least 7’2″ tall, Yao Ming has the second highest per game scoring average behind only Kareem Abdul-Jabbar. These kinds of statistical nuggets obviously don’t paint a picture of Yao’s career that’s crystal clear, but it at least shows that he wasn’t just some tall goof that couldn’t move and couldn’t play and the only reason he was in the NBA was because he is gigantic.

Yao Ming is indeed gigantic, and that will forever remain part of his mystique. I remember watching the first game he played against Shaquille O’Neal and being flabbergasted that anyone could make Shaq look like such an ordinary human being. When Yao blocked Shaq’s first three field goal attempts of the game it was a shock to my ten-year-old system. That’s when I knew Yao was the real deal on the floor and without question memorable. The fact that his career was cut short doesn’t change either of those realities.