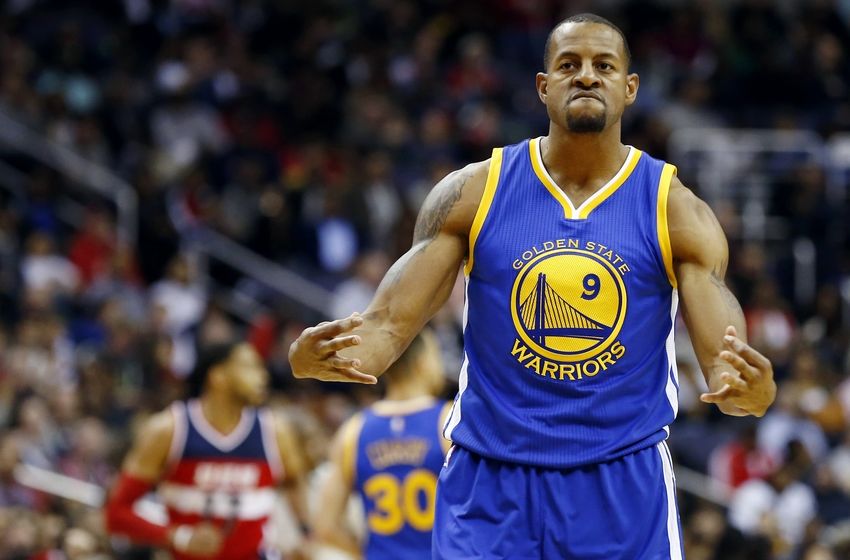 I have two stories that I’d like to share with you today. They are vaguely personal, yet wholly related to Andre Iguodala, and the combination of the two stories will hopefully paint a picture that accurately depicts what the career of Iguodala has looked like. I try this kind of thing often. It works about 60 percent of the time, so we’ll see.

The first story begins with Dwight Howard. I understand that hearing this is likely a bummer, since you came here to read about a multi-tooled team-first glue guy, and now I’m about to start with a story about someone who is none of those things. So again, my apologies. There was no other way it could be done.

If you think back to Summer of 2013 you’ll remember that Free Agency was highlighted by Dwight Howard contemplating and eventually deciding to leave the Los Angeles Lakers. We should have known from the start that Dwight and the Lakers would never work. It was a match made in hell. There was rumored tension between Kobe Bryant and Dwight during the 2008 Olympics, and there wasn’t any good reason to think that the long rigors of an NBA season would do anything to ease that tension.

Once the calendar page turned to July 1st Dwight met with various teams, soaked in everything he heard in each of those meetings, and then reportedly narrowed down his decision to three teams: the LA Lakers, the Houston Rockets and the Golden State Warriors. The Lakers and Rockets weren’t a surprise, but Golden State’s inclusion in the final three turned some heads, even though you could talk yourself into the fit making sense. The Warriors were fresh off their first postseason appearance since 2007 and the young core they had in place (namely, the newly minted “Splash Brothers”) could have used someone like prime Dwight Howard attracting all kinds of attention, drawing double teams in the paint, patrolling the paint even better that Andrew Bogut could, etc. In theory this made a great deal of sense, so long as you squinted a little bit and ignored the fact that the negative aura that followed Dwight around the previous two seasons could seriously alter the chemistry of a team that had an identifiable amount of it.

Just as it appeared Golden State might pull off an upset bigger as their 4-2 series win in Round 1 against the Denver Nuggets, they shuffled around their roster, cleared some cap space and signed, wait for it, Andre Iguodala. A move that made so much more sense at the time than most people realized, with the exception of a guy on the passenger’s side of his father’s ride trying to holler at anyone who would listen, “Guys, this makes way more sense than if the Warriors were to sign Dwight!”

Iguodala wouldn’t threaten Golden State’s chemistry. He wouldn’t get any coaches fired … though, if he could have sped up the process of getting Mark Jackson canned that might not have been a bad thing. He would be able to play any style offensively and take some of the pressure to handle the ball and facilitate the offense at all times away from Steph Curry (this was before Curry evolved into a two-time MVP). He’d enter as the team’s best perimeter defender; a guy who could guard Chris Paul, LeBron James, James Harden, and Kevin Durant with equal degrees of effectiveness because of long arms, quick feet, underrated athleticism and unparalleled preparation pre-game. All Iggy did was come in, play hard, set a tone, push teammates, give opponents problems, keep the chemistry steady and make the Warriors better in every facet imaginable.

We can’t say that Iggy’s presence was solely responsible for Golden State’s metamorphosis from casual Playoff team to NBA Champion, but it certainly had something to do with it. Steve Kerr deserves as much credit as anyone (Kerr saw the direction the NBA was heading in a way that I don’t think Mark Jackson did … Jackson was running post-iso’s for Jermaine O’Neal in big spots in 2013. That may have worked in 2003. It sure as shit wasn’t going to work in 2013). Steph Curry, Klay Thompson and Draymond Green have all improved drastically since the end of the 2013 postseason. The Dubs were able to add hungry, versatile vets to fill out their rotation. They hit the jackpot across the board, but it really all started when Iguodala came in.

Iggy routinely defended the opposing team’s best offensive player and makes them work in ways few other defenders do. He’s among the best iso defenders of the last decade and he’s just as solid playing angles and rotating away from the ball. In his three seasons in the Bay Area he’s never squabbled about minutes or touches, even though in Philly he was a work-horse and the number one scoring option on teams that went to the postseason. He took his relegation from starter to sixth man, a maneuver to try to save the confidence of Harrison Barnes, in stride and has thrived in the role off the bench.

It’s very safe to say that things wouldn’t be the same if Dwight Howard were a Warrior and Iguodala had spent the previous three seasons playing elsewhere. Kevin Durant wouldn’t be a Warrior today (this goes beyond the product the Warriors putting out being less appealing … many plugged-in individuals noted that relationships Durant formed with Curry and Iguodala in 2010 during the FIBA World Championships was a big reason why he chose Golden State). I’m almost positive that the Dubs wouldn’t have won an NBA Title either. Iguodala was the key to the unlocking of the Warriors “Death Line-Up.” If it weren’t for a versatile wing who could defend multiple possessions, and a guy who was labeled your “worst shooter” being able to hit clutch jumpers like Iggy had time and time again, the Warriors don’t come nearly as close to perfecting the game of basketball like they did last year. It just doesn’t work out. Dwight fucks all of that up; the chemistry, the X’s and O’s, everything. Iguodala just made everything better … and everything possible. 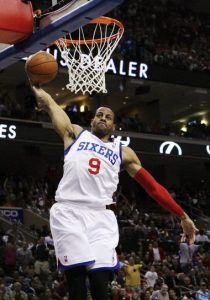 The second story I wanted to tell you is shorter, a reach and it goes like this: I once compared Andre Iguodala to a bowl of soup. If my memory serves me correctly, this is the only time I’ve made a direct comparison between an NBA player and any sort of food.

The comparison really does make all of the sense in the world. Think about soup … I’m talking the most basic definition. Soup is a mixture of a watery broth or cream, plus a combination of seafood, meat, vegetable, rice, noodle, etc. It’s a delicious combination of a variety of wonderful and edible things, yet, Soup couldn’t standalone as your main course every night. On occasion you could rely on a homemade chicken noodle or a well-crafted New England clam chowder to hold it down at dinner time. Every night though? It just wouldn’t get the job done. But if you could mix a soup in as your main course once every two weeks, plus have it as your side dish a few times, well then now you’re eating like royalty.

That’s Iguodala. In Philadelphia he was miscast as a main course every night. There were some nights when he was able to come through and deliver a delicious meal (or for the sake of this comparison, carry the Sixers to a win … the most notable win being a Game 6 win over Chicago in the 1st Round of the Playoffs, when the 8th seeded Sixers upset the Derrick Rose-less Bulls). But he never had quite enough in him to carry a team to serious contention on his own. In Golden State it’s a totally different story. As a Warrior Iggy could be an appetizer every night. The Lobster Bisque to the Warriors’ T-Bone Steak. The Broccoli Cheddar Soup to the Warriors’ Rack of Ribs. He could maintain the role he was most equipped to fulfill and kick ass at it. And so far that’s exactly what he’s done.