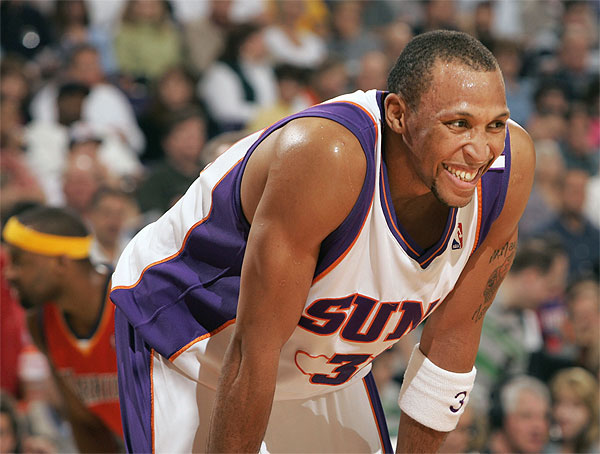 “I want the recognition. I feel I’ve done what it takes to get it, but for some reason it hasn’t happened.” – Shawn Marion, on the perceived lack of respect in regard to his game

“He may feel unappreciated, but everyone here appreciates what he does. We know that without him there is no championship.” – Jalen Rose, on Shawn Marion

“Shawn is a smart guy, and he knows how good he’s got it.” – Mike D’Antoni, on Shawn Marion

No matter what your perception of Shawn Marion is or was, at least one, and possibly all three of those quotes, accurately sum up the mans entire playing career. The 54 words that the three quotes are made up of do a far better job of describing the Matrix experience than I could with an infinite amount of words. That doesn’t mean I’m cutting my Shawn Marion section short; it just means that Marion will forever be remembered for being A) great and underappreciated, B) great and properly appreciated, or C) great because he found himself in the most ideal possible situation imaginable … or, D) as I mentioned above, some combination of all three.

It’s hard to dispute the idea that Shawn Marion didn’t benefit from playing alongside Steve Nash, with the Seven Seconds or Less Suns. That would be like suggesting an individuals financial situation wouldn’t improve after receiving a massive pay raise. But what’s missing in that equation is the understanding that the financial situation could have been just fine prior to the improvement. Or, in Marion’s case, he was already on track to have a stellar NBA career. In the four seasons prior to Nash’s arrival in Phoenix Marion averaged 19 points, 10 rebounds and 2 steals per game. He was an All-Star in 2003, and only five players had more double-doubles in those four seasons than Marion. Most importantly, his presence was certainly a big reason Nash was lured to Phoenix when he hit free agency in the Summer of 2004.

Marion’s game was compatible with the up-tempo style Nash and Head Coach Mike D’Antoni would implement in Phoenix, but he was already carving out a nice career for himself by doing the little things that would only be highlighted once he was playing for an offensive machine. Marion, an astounding athlete in his prime, ran the break and crashed the offensive glass as well as anyone in the league; he was an absolute nightmare to box out, the greatest explanation for why the 6’7″ swingman ranks 36th all-time in rebounds. Never a great iso scorer or jump-shooter, Marion had to scrap for touches and buckets, and rely on his point guard to recognize that he did cut and move well without the ball. Once Nash arrived he never needed to worry about that again.

Behind the two-time league MVP Steve Nash and power forward Amar’e Stoudemire, Marion was given third banana status. It wasn’t just a measure of touches … it was in terms of universal appreciation and recognition. Marion was as uniquely talented as a defensive presence as there was in the NBA from 2000 through 2007, yet he never made an All-Defensive team. He guarded point guards that Nash couldn’t handle and bigs that would school Stoudemire in the post. The Suns were never a defensive behemoth, and Nash and Stoudemire’s inefficiencies (and Mike D’Antoni’s general lack of emphasis on making defense a priority) made it hard for anyone to realize the myriad of responsibilities Marion had on a nightly basis.

On offense the inverse was true … Nash’s unselfishness was contagious and his style of play was so wildly entertaining. Young Amar’e was a handful for any defender to handle. Marion, a chameleon that was essentially Draymond Green before Draymond was even a chubby Spartan, was routinely overlooked because of Nash’s transformative skill and Stoudemire’s raw dominance. Marion, a master of the little things, went unnoticed.

Marion’s gripes are justified. In the moment he wasn’t properly appreciated, and even now, despite a staggering statistical resume, he’s still flying under the radar historically. Marion twice finished in the top five in both rebounds and steals, a feat that hasn’t been matched since. During the 2005-06 season Marion was the only player in the NBA that was in the top 20 in points, rebounds, steals, blocks and field goal percentage. Of course, all statistical anecdotes can be at least partially credited to the style which the S.S.O.L. Suns played. But even still, a replacement level small forward (or power forward, or whatever the hell you want to call Shawn Marion) wouldn’t have come close to replicating those kind of numbers, or having the same kind of overall impact Matrix had.

The mid-2000’s Suns aren’t the same without Marion, and the same is true of Marion without those Suns team. If Marion didn’t have the luxury of playing alongside Nash, Stoudemire, etc., he’s just another guy who put up big numbers on teams that weren’t remotely in contention for a championship. He’d be looked at no differently than every other guy who has had the misfortune of being labeled a “good stats, bad team” type of player. So sure, D’Antoni was almost right … Marion should have known how good he had it. At times Marion was overlooked, but no team at any other time could have used him any better than the Suns did.

Marion either didn’t realize this, or he did and didn’t care. He requested a trade from the Suns and was eventually sent to Miami in a deal for Shaquille O’Neal during the ’07-’08 season. That trade signaled the end of an era in Phoenix. Two seasons later the Suns would make the Conference Finals, but they weren’t the run-and-gun dynamo they once were. It proved that they could still thrive without Marion, but they certainly wouldn’t be as high octane. And maybe that should have been Marion’s legacy. 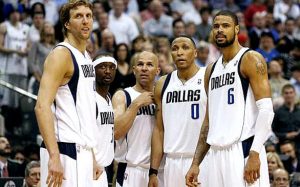 Marion was the easiest of that Suns big three to slow down; if you prevented Phoenix from getting out in transition then Marion was neutralized. Smart defenses dared Marion to settle for jumpers, most of which Marion clanked. Maybe wings that can’t shoot or consistently create a good shot for themselves don’t move the needle as much as we thought. Since he was playing alongside truly lousy defenders like Nash and Stoudemire, maybe Marion was actually an overrated defender. Marion’s detractors would tell you that the best case scenario for his Suns tenure was the version that played out, and maybe they aren’t wrong. It was fun and mostly memorable, but maybe more sizzle than steak.

Jalen Rose was right when he said that there would be no championship without Marion … he was just five years too early with that statement. After sad stops in Miami and Toronto, Marion made his way to Dallas. The Mavericks run to the 2011 NBA Championship will always be defined by Dirk Nowitzki‘s postseason heroics, but Dallas wouldn’t have sniffed the title if they didn’t get contributions from title-hungry vets like Jason Kidd, Jason Terry, Peja Stojakovic, Tyson Chandler and Shawn Marion. Marion was no longer called upon to put up outrageous numbers, and he didn’t need to deal with the “is he overrated or underrated” debate that always made his career hard to judge. All Matrix needed to do was do all of those little things that made him fantastic in his prime.