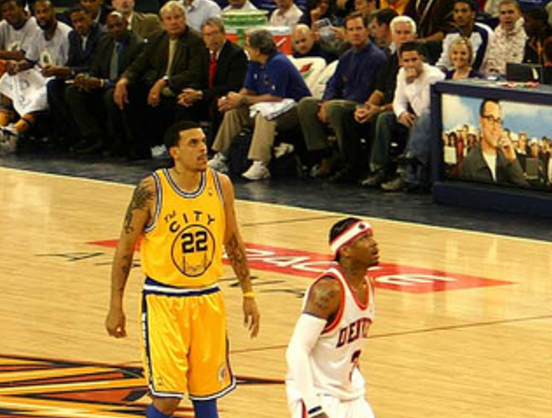 Matt Barnes has been officially signed by the Golden State Warriors today. From either the lengthy or short-term perspective, it’s difficult to put into sensible words how much Matt Barnes means to this franchise. More specifically, what he means to the fans.

Brief history lesson. As a kid born and raised in the Bay Area, I was always riding with the Warriors. Long before Stephen Curry‘s ascension, Joe Lacob’s ownership, the numerous excellent draft picks by Bob Myers, and the arrival of superstar Kevin Durant, the Warriors were essentially the bottom of the NBA. I remember celebrating in ecstasy when Golden State reached the .500 mark during a season when I was in sixth grade. That’s right, for a team now determined by a championship-or-bust viewpoint, a .500 season was once considered the landmark of success.

If you were both a kid and dreamer riding with the Warriors, here was the fantasy, a mindset so deeply out of left field that even envisioning this madness felt like a sin of mankind – you wanted Golden State to snag the eight seed and simply have a playoff appearance. First round exit? So what. Four game sweep? No problem.

We, as a fan base, just wanted to taste postseason basketball. I dreamed of supporting a team that was relevant. My fandom, as was the case for all of the other diehard fans that I went to school with, needed to be rewarded. Beyond that, we wanted our team to be respected.

Enter Matt Barnes. No, he was not a savior for the Warriors during Golden State’s magical 2006-07 season, but he was a vital contributor to something special. Alongside Baron Davis, Monta Ellis, Stephen Jackson, and others, Barnes helped formulate a team that balanced skill and physicality. They would drill threes, nearly land in scuffles all the time, and argue with the referees at will. More importantly, they played hard. These were teammates who Draymond Green would have worshiped. In the middle of this newfound style, this sense of hope for the fans, was Barnes.

In his 76 games with the Warriors during the 2006-07 run, Barnes shot 43.8 percent from the field and 36.6 percent from three (a career high). A player who was previously thought to have a busted shot became a reliable threat from deep on a team full of players unafraid to chuck from long range. For the first time in years, there was a growing sense in the Bay Area that the Warriors would actually make the playoffs. The unthinkable, the distant fantasy basketball gods warned us to avoid for its unrealistic nature, was becoming possible.

If you’re a Golden State fan, or even a casual NBA follower, for that matter, you know the story from here. Those 2006-07 Warriors crossed paths with the high powered Dallas Mavericks, a team who won’t be done justice by viewing the current Dirk Nowitzki and modern Dallas squad as a gauge. This was a 67-win juggernaut during a year when Nowitzki won the MVP. They were quite possibly the strongest team in the NBA, and the Warriors were simply a 42-win underdog who was miraculously making a playoff appearance.

That didn’t matter. The breakthrough moment finally came as Golden State shocked the Mavericks in six games. The eight seed had defeated the one seed, and my lifelong favorite team had accomplished something even beyond the fantasy – not only did they reach the playoffs, they won a round.

The magic faded as a five-game series was lost to the Utah Jazz and a 48-win season the next year was met without a playoff run of any kind. The Western Conference was stacked to the point in which 48 wins didn’t grant you anything. From there, the Warriors were broken up, and Barnes moved on. Stints with the Phoenix Suns, Orlando Magic, Los Angeles Lakers, Los Angeles Clippers, Memphis Grizzlies, and Sacramento Kings followed.

But today, Matt Barnes is back. The “We Believe” squad is no more. Something much scarier, much more formidable, lurks in the collective mind of the NBA. The two-time MVP Curry is here. One of the greatest long-range shooters in basketball history, Klay Thompson, is here. The NBA’s most versatile and relentless defender, Green, is here. The only one missing is Durant, and thus, we have the out of nowhere importance of Barnes.

A superstar MVP he is not, but an important role player is what he’s always been. The exact minute total or ideal setting for Barnes has not been determined. However, his need is undeniable. Andre Iguodala is the only other true small forward on the roster. With limited options at this position and Durant out, there is a spot to be carved out for Barnes.

The stakes are higher now. Fans aren’t satisfied with a shocking first round playoff victory. These Warriors are those 2006-07 Mavericks, only better. Much better. And Barnes, perhaps not as productive as he once was when he established his NBA relevance with the “We Believe” squad, has the opportunity to be equally important.

One could say everything is coming full circle for Matt Barnes with today’s news. If that story ends in a championship, the basketball gods would have created a perfect story with a beautiful ending.