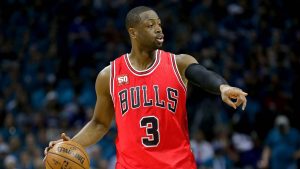 Wednesday night in the fourth quarter Dwyane Wade sustained an elbow injury that he and we pretty much knew meant the end of the season. He said he heard it pop. Popping sounds are not good for body parts. An MRI Thursday morning confirmed the sum of everyone’ worst fears, what Wade described as, “a fractured bone and some ligament damage. Technical terms would be a sprain or whatever.”

Whatever it’s called, and Wade said surgery isn’t necessary, the Bulls said Wade would miss the rest of the regular season. He perhaps could return if the Bulls make the playoffs, but that’s questionable. With an option on his contract for next season. NBA.com