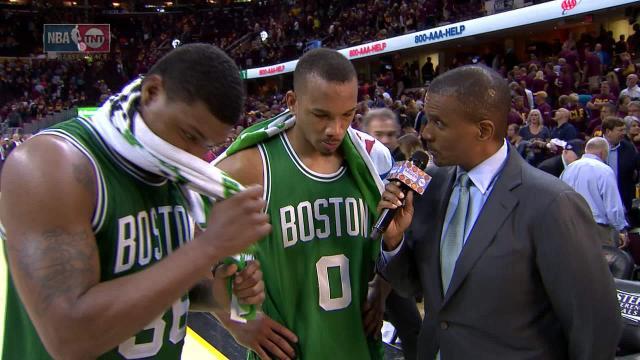 FINALLY. IT’s about time we were treated to a good basketball game.

LeBron James and the Cleveland Cavaliers are mortal after all. After witnessing the Boston Massacre in Game 2 coupled with Isaiah Thomas being ruled out for the series, conventional wisdom pointed to a Cavs sweep. Well, the universe had other plans.

Not only did the Boston Celtics hang tough with the Cavs in Game 3–they won the damn game 111-108. I’ve spent the majority of the postseason continuously praising LeBron so it’s only right to call it like I see it–LeBron played like crap. One bad performance tends to happen when you rip off a 13-game assault like he did dating back to last playoffs.

Enough about the Cavs for now. The Celtics deserve some serious praise for this win. Marcus Smart was inserted into the lineup to replace IT and had his coming out party. Did the ghost of Larry Bird take over his body? There is no other reasonable excuse a career 29.1-percent three-pointer shooter goes 7-for-10 from beyond the arc. The Cavs almost put this game on ice in the first half with their hot shooting from three, but it was Smart and Avery Bradley who kept it close.

In the third quarter is where the Celtics flipped a switch. Head coach Brad Stevens inserted Jonas Jerebko into the game and everything got a lot more chippy. Jerebko hit some big shots late, but his constant chippiness and bickering did not completely throw the Cavs off their game, but it definitely had to piss them off a bit. With a small window of opportunity Al Horford joined in on the fun and the Celtics hung around long enough for Bradley to the game-winner.

Avery Bradley hits game-winner to complete one of the biggest upsets in NBA playoff history pic.twitter.com/UHHdcd5Ahb

That shot hit every possible part of the rim before falling. Was this the greatest upset in playoff history? I wouldn’t go that far, but it is certainly up there. What would have made this upset the best of all time? If LeBron did not have his worst postseason game since 2011.

What has to disappoint Cavs fans today is not the fact that LeBron had a bad game. That’s called being a mortal being, something LeBron hides really well. Without LeBron the plan should have been to find the hot hand and ride them to the end. Kevin Love was that hot hand. In the first quarter he looked like he was playing NBA Jam with the Celtics. He started 6-for-9 from three, but cooled off thanks to not getting the ball enough in the second half.
This series is still over. The Celtics can now go into the summer knowing they did not get swept, have legit chance at signing Gordon Hayward and will have Markelle Fultz. For the Cavs this should be the game they point to when planning another bad LeBron game. Kyrie Irving and Tristan Thompson were also good in Game 3 (Thompson has been money all series), but something was still off.

As they prepare for the showdown with the Warriors, head coach Ty Lue has to have a better response. With LeBron not himself the rotation should have expanded. Channing Frye did not check in. Deron Williams barely played. Those are two role players that played well in the series before, why limit them now?

The next two games should swing back to the Cavs. No way in hell LeBron scores eleven points on 4-for-13 from the field again. But they must be cognizant of their weaknesses and cover them up as much as possible. If the Celtics were able to capitalize without their best player you can only imagine what a healthy Warriors team will do.