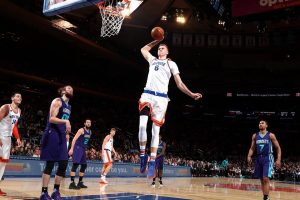 Adrian Wojnarowski is reporting the Knicks (Phil Jackson) have made calls to teams about Kristaps Porzingis. They have tried to frame it that they’re listening to teams. They put calls out. The Knicks are motivated to get into the Top 4 of the draft. Josh Jackson would be the target. Facebook