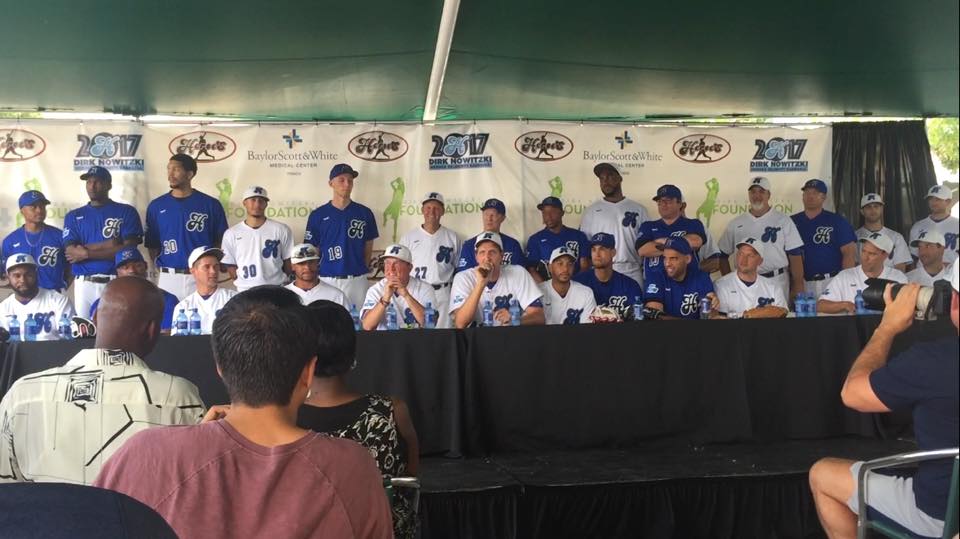 Without warning, the heat seemed to lift three hours before the first pitch of the game. It was a veritable sign that everything was supposed to run smoothly for veteran NBA star Dirk Nowitzki on this humid June afternoon, a sign that wasn’t lost on his prismatic outlook. As he sat at the long table that stood front and center before the Dallas/Fort Worth Metroplex, he graciously leaned forward in his seat and managed to playfully make contact with every teammate and rival, his grin and very Dirk-ish laugh filling up any random lacuna in far right field.

While he wasn’t used to playing a sport this time of year, he was familiar with Texas’ temperamental moodiness in regards to weather – She was a bitch and unforgiving in Her summer wake. He had been doing this very charity event for six years, having been handed over the torch from Dallas Stars’ golden boy Mike Modano, who was just one of the many volunteers that kept this charity event alive for the past 16 years.

This particular year, Dirk turned to his left and right and was greeted with an array of familiar faces including teammates Devin Harris, Dwight Powell, Seth Curry, and rookie Dennis Smith Jr., a hypnotic draftee that joined the Dallas Mavericks family a hectic three days prior. Also peering back at him from under the shade of baseball caps was the neighborhood friendly Dak Prescott, the hungry quarterback of the Dallas Cowboys, his coy smile not lost on the cameras perched in front of him.

From tennis player Andy Roddick to former police chief David Brown, Dirk assembled a memorable group of individuals that would not only entertain a very sold-out Frisco crowd, but would also bring in money for a very worthy cause.

And then… and then, well, they played something that sorta resembled the game of baseball.

To the average eye, this was a baseball game. To someone who was used to watching professional baseball, this was a charitable game of beer pong being played out on a diamond.

But that was the point – this was all entertainment for a very worthy cause.

There were somber moments that caught your breath – including a very mournful moment that featured the families of the fallen officers who lost their lives almost a year ago in the Dallas shootings taking the field in remembrance, watching as the Dallas Police Department bagpipers circled them in a vivid and tearful tribute.

There were quirky moments that made you wonder if the athletes on the field downed shots of Patron before each inning – including the Dallas Cowboys’ Dez “It Was a Catch” Bryant taking the microphone and attempting to distract Dak Prescott into striking out while at the plate (Dak, being the enemy in this match-up since he played for Dirk’s White Sox while Dez played for the opposing Blue Sox). Mavericks’ favorite Yogi Ferrell risked injury by partaking in a game during innings that featured him being dragged across the bases in a red wagon (he survived) while Dwight Powell danced around attempting to help his teammate get the race started.

For once, Rick Carlisle beamed as he gave his players pep talks (he managed the Blue Sox).

For once, Dak Prescott didn’t care if he hit the mark when throwing a ball (good thing too – cause he sucked at playing shortstop).

For once, Dirk didn’t care if he was horrible at a sport, he only cared that the crowd was entertained, and that it was all for a good cause.