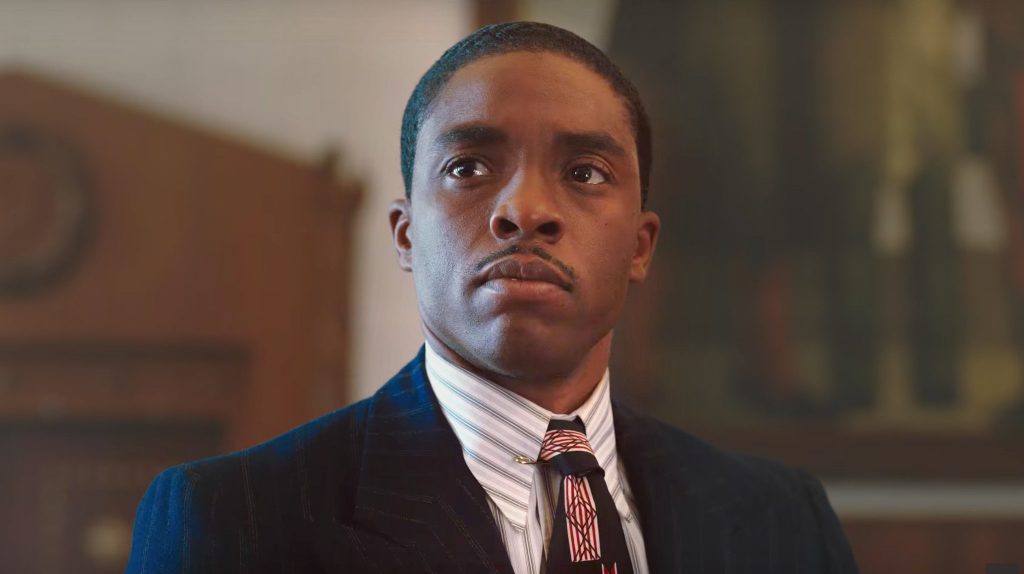 Sometimes we need to look past the comic book heroes paraded onscreen to appreciate the real ones that have left a mark in this world. Marshall, directed by Reginald Hudlin, tells the story of a young Thurgood Marshall, as he battles through the flames of one of his career-defining cases. Chadwick Boseman plays the lead, and is joined by Josh Gad, Kate Hudson, and Sterling K. Brown.

Hudlin’s direction allows the actors to shine. It’s a by-the-books approach to court-room dramas, complete with flashbacks, but it does have a bit of style. The film was made to be a crowd-pleaser, and not necessarily a bio-pic that spans decades of the man’s life, and that makes it a little refreshing, as we get to focus on one particular case.

The script pays tribute to the heroics of the NAACP Civil Rights lawyer and first African-American Supreme Court Justice. It also manages to build a friendship well, as we see the team of Sam Friedman and Thurgood Marshall grow throughout the film. However, like most court-room dramas, there aren’t many gray areas, just black and white. Overall, the script plays to what the audience wants to see, and it’s very good at doing just that.

Chadwick Boseman further solidifies his acting chops with this performance as Marshall. Boseman truly brings him to life and captures his swagger like he was born with it. There’s a fire in Boseman’s performance as Marshall, but he’s always trying to keep his cool, since he’s playing a man that knows he’s the smartest person in the room no matter what door he walks through.

Josh Gad plays Sam Friedman, a Jewish lawyer that is under the wing of Marshall. Gad can’t seem to escape his goofy sidekick roles, but he has more to do in this film than usual. This might be his best role yet. As Sam Friedman, Gad is hilarious, but also exudes a sense of loyalty that is admirable. Sterling K. Brown, the chauffeur that is accused of raping a white woman, turns in a captivating performance.

Marshall is a film that celebrates an actual hero, and this plays out almost like an origin story for Thurgood. It checks everything off the court-room drama list, but the performances make it better than average. This film rightfully celebrates Marshall and his passion for justice, which he was willing to fight for despite the odds.