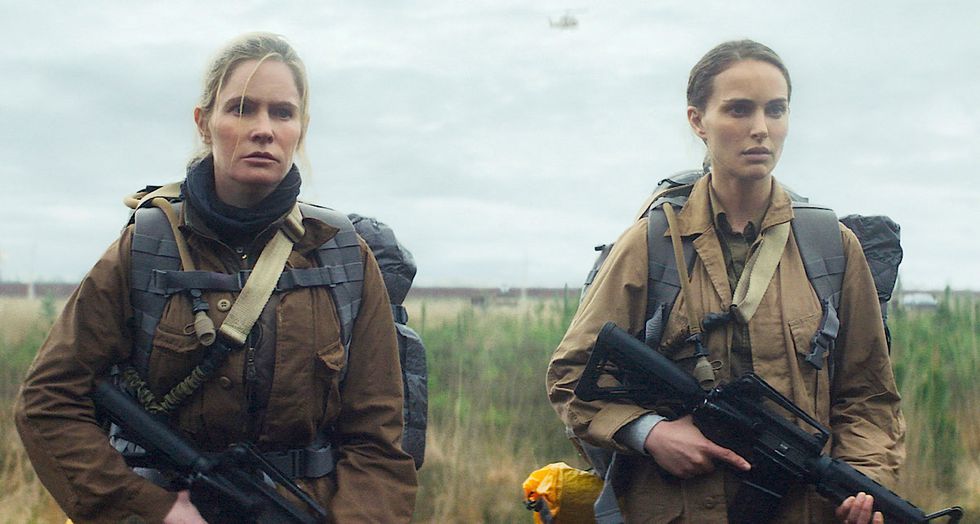 From Sunshine to Ex-Machina, Alex Garland has always delivered as a screenwriter. Annihilation is another hardcore Sci-Fi script, which is a loose adaptation of a book, that really digs deep into the unknown while revealing the human condition. The film arguably joins the conversation of Sci-Fi greats of the 21st Century, and reminds you a bit of Invasion of the Body Snatchers and The Thing.

At its core, Annihilation is basically an alien invasion film that is anything but run-of-the-mill. How do we deal with the unknown? We fight it, we run from it, we try to figure it out, and sometimes we connect with it. Our natural reactions to what is alien to our society is the main conversation of this film, and Garland handles the dialogue well. What makes it interesting is that there’s so much speculation going on about the dome covering a part of Earth, yet there’s no clear answers, and that challenges us to make sense of it.

Annihilation is a cerebral film with fascinating visuals. The film takes you to this area on Earth that looks like its covered by an enormous bubble dome referred to as “The Shimmer.” It’s a pretty lame disarming name, but once you’re inside,  you feel like you’re in a beautiful nightmare.  The area is making drastic changes to the environment. It’s as if Mother Nature is painting her creations while on an acid trip. The mix of CGI and practical effects are blended well, especially with all the mysterious creatures within “The Shimmer,” allowing some scenes to really get under your skin and marinate for a bit.

Natalie Portman plays Lena, a Biologist and military veteran that believes her husband is dead, that is, until he mysteriously shows up in their bedroom. Although she’s a small woman, Portman exudes toughness very well playing Lena. She carries some heavy regret with her throughout this journey, and her actions are driven by her urge to make things right. Her chemistry with Oscar Issac, who plays her Husband Kane, is very intuitive. We are able to easily know that they love each other with just a look. Portman is fantastic in the role. Lena is not perfect, but she is willing to put herself in the danger of the unknown to find some kind of redemption.

The squad that Lena ventures into “The Shimmer” with is consists of a top-notch group actresses. From Jennifer Jason Leigh playing the cold Dr. Ventress to Tessa Thompson playing the empathetic Josie, everyone has a different outlook on life. They all enter “The Shimmer” for different reasons.

Annihilation is a Sci-Fi film that will really get you thinking about human nature and how we react to the unknown, as well as how we can be self-destructive. Sometimes something seems evil because of a misunderstanding or just plain old ignorance. Maybe that’s all that evil really is. We’re all just trying to survive and make sense of everything, even them.