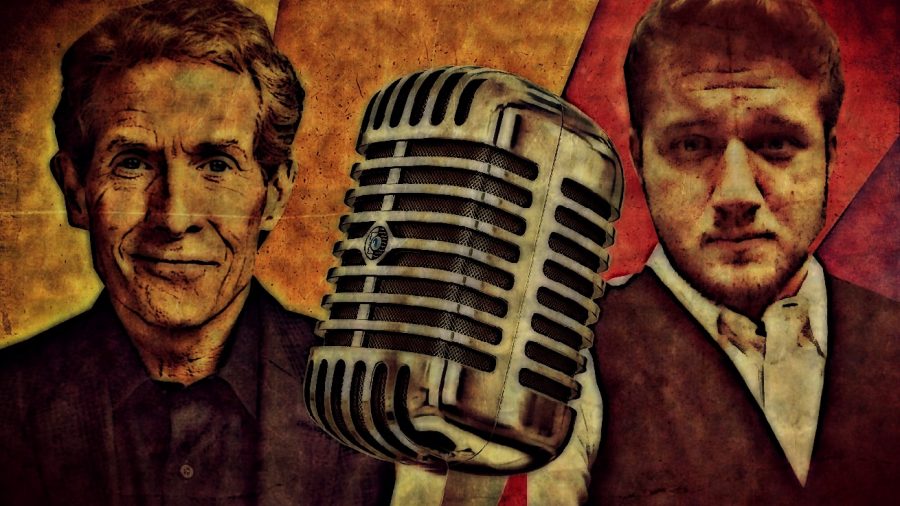 Let’s start with this … I don’t really know why I’m challenging Skip Bayless to a debate. It’s probably a waste of my time, but perhaps I need to blow off some steam in a longer-form and more constructive manner than on Twitter. The chances of anything resulting from the challenge that I’m about to make is about as slim as any informed sports fan mistaking Skip Bayless for a credible sports analyst. I know that by simply typing the name “Skip Bayless,” I’m playing right into his trap. I’m feeding the ugliest and most annoying troll. For Skip, word of mouth buzz (positive or negative … and in his case, it’s mostly negative) and click-bait hot takes mean everything. After over a decade of perfecting this annoying shtick, Skip’s credibility is shot, and unless he’s stupid or senile, he surely must know this.

Regardless of if it’s all an act, or if Skip Bayless actually believes everything he says is true, Skip has become the human embodiment of everything that is wrong with sports media. He’s the poster child for all of the loudmouths who speak as if the garbage that is spewing from their mouths is actually gospel, and they do this while arrogantly dismissing the well-informed opinions of their more intelligent counterparts. This type of “journalist” spends more time nitpicking and bashing athletes (in Skip’s case, he’s unapologetically become a LeBron James slander account on Twitter), shitting all over the current product, and offering purposely inflammatory opinions just to create bullshit conversations that aren’t at all necessary than they do watching games, analyzing the meaningful stuff, and recognizing the current greatness before their eyes. It becomes crystal clear once they stop doing their homework and when they start getting by on hot takes, brashness and their established name. That’s exactly where Skip is.

And there lies the problem: The folks running Fox Sports must know this — and if they don’t, then like Skip, they’re either stupid or senile — and yet they forked over a large sum of money two years ago to bring Skip Bayless to their network. Two years ago today the news started leaking out that Skip was leaving ESPN for Fox Sports 1, where he would be getting paid millions of dollars annually to serve as the figurehead and namesake of a sports debate program that is nothing more than the poor man’s version of his shitty old ESPN sports debate program. And get this … his Fox Sports 1 show only gets about half of the audience his old show on ESPN got. Maybe people are getting tired of shitty old Skip Bayless.

Now to be fair, I should be honest and disclose that I haven’t watched one single second of Skip and Shannon: Undisputed, nor have I actively sought out any segments from this show that were posted on YouTube or Twitter or any media platform I frequently peruse. Therefore, I suppose I don’t know for sure that Undisputed is the same sort of dumpster fire that First Take was. With that said, Skip Bayless is, has been, and always will be a one-trick pony, and if he has had any sort of creative control of Undisputed, then it’s certain that there are no differences between those two programs. That would explain why Sports Illustrated’s Richard Deitsch has sent a number of tweets similar to this one in tone over the past two years:

My exposure to Skip these days is limited to when I see people post these Undisputed videos and drag Skip through the mud, or when Skip’s tweets are retweeted by someone who is mocking whatever awful piece of wisdom is on his mind at that moment. Unfortunately for me, I always end up getting sucked down the rabbit hole and reading every single idiotic thing Skip has tweeted over the previous few weeks. It’s a sickness, and I’ve tried curing it by hurling insults and taunts in Skip’s direction on Twitter, and while that’s a nice short-term remedy, I haven’t been fixed yet.

After doing some soul-searching and symptom analyzing — some internal Web MD’ing, if you will — there’s only one certain antidote; one singular cure to being sick of this sad excuse for a sports analyst. I need to debate Skip Bayless.

This isn’t just a challenge to Skip Bayless to “embrace debate” and let me come on his show and school him in an NBA-related dispute. This is a challenge to Fox Sports 1 to have the balls to give me the shot. Why not take a chance on me? The TV ratings for Undisputed are mediocre, so why not look for a way to bump those up for a day? First Take is giving fans of the show a limited spotlight to debate their co-hosts … why not give someone who loathes your host an extended chance to take him down?

If we get enough eyes on this challenge, and if enough people put @FoxSports, @FS1, @Undisputed, and @RealSkipBayless on blast on Twitter, this will be hard to ignore. And if those four Twitter accounts do ignore it, that means they’re all afraid. They’re afraid that their highest paid player is exactly what most people think he is. A joke. Skip Bayless is nothing but a joke. He’s like your older relative who says all sorts of dumb, misinformed stuff all the time and has a completely backwards way of thinking. Your parents probably had to tell you something along the lines of “Oh don’t worry about what he says. He’s just old. He’s never going to change his mind, and it’s not like he has much time left anyway.” Only Skip Bayless isn’t my relative (thank God) and I have no problem putting him in line.

And if they aren’t afraid, then why not accept my challenge? Surely, some 26 year old nobody like me couldn’t possibly defeat Skip Bayless, king of sports debate programming, in an NBA debate. Skip may claim to provide his audience with “daily sports truth and the hottest sports debate,” but I’ve talked with a number people who watched First Take or currently watch Undisputed, and they almost always say the same thing when I ask them if they actually like Skip Bayless, or if they find the positions he takes to be insightful: “No, but he’s entertaining.” Some people find clowns entertaining. All that Skip is missing is the ridiculous face paint.

If that clown beats up on someone like me, that’s the best possible outcome for both Skip and your network. FS1 probably sees a ratings bump when others sports fans hear about how Skip Bayless is going to be debating someone who legitimately despises him, and his profile as a villain would only grow larger if he had the opportunity to brag about his victory over the average fan day after day, and that helps everyone involved at Fox Sports big time. Why not just fully embrace Skip’s villainy? Actually, is villainy the best way to put it? Some villains are likable. Skip Bayless is just unlikable, and the ship has sailed on portraying him as a likable media presence.

Let me just set the record straight really quick though … I’m not going to lose to that lousy troll who has been masquerading as a credible basketball analyst. I watch more NBA than Skip Bayless does, I know more about the game of basketball than Skip Bayless does, and I know more about the history of the NBA than Skip Bayless does. You put me in a room with that man with the cameras rolling, and we’ll see that the Vandy grad who built a career on sports debate lacks a clutch gene when this nobody from Dunk City wrecks his ass for however long you’d give me the opportunity to do so. And I beg you, please give me the full 150 minute time slot to make a mockery of Skip Bayless — aka Skip Nauseous, aka Skip Useless, aka Skip Fox Sports Should’ve Paid You Way Less, aka Skip I Want To See Your Face On My Television Way Less.

I’ll be in Los Angeles from June 27th to July 2nd. I don’t care if y’all get in contact with me eight hours before showtime and don’t bother to tell me what NBA topics we’ll be debating until the show is on air … that works for me, and frankly, Skip needs the help. If those dates don’t work, I’ll fly myself to L.A. another time to make it work. I won’t take any money for an appearance. I’ll donate any compensation to a charity of Skip’s choosing. It’s the least I can do for taking away the last tiny bit of credibility he’s hanging on to, because after I’m done with him, the only thing that will be “Undisputed” is that if Skip Bayless actually had a prime, he’s now past it.

What I ask of anyone who is reading this is that you get on Twitter and send this challenge to @FoxSports, @FS1, @Undisputed and @RealSkipBayless with the hashtag #SonnyVsSkip. Bug the hell out of them until they accept it or at least publicly acknowledge it in some way. We’ve had to deal with the headache that is Skip Bayless on Television for nearly two decades now. That’s two decades too many. Let’s give Skip and the people who employ him a headache of their own. Make some noise, and get this thing trending.