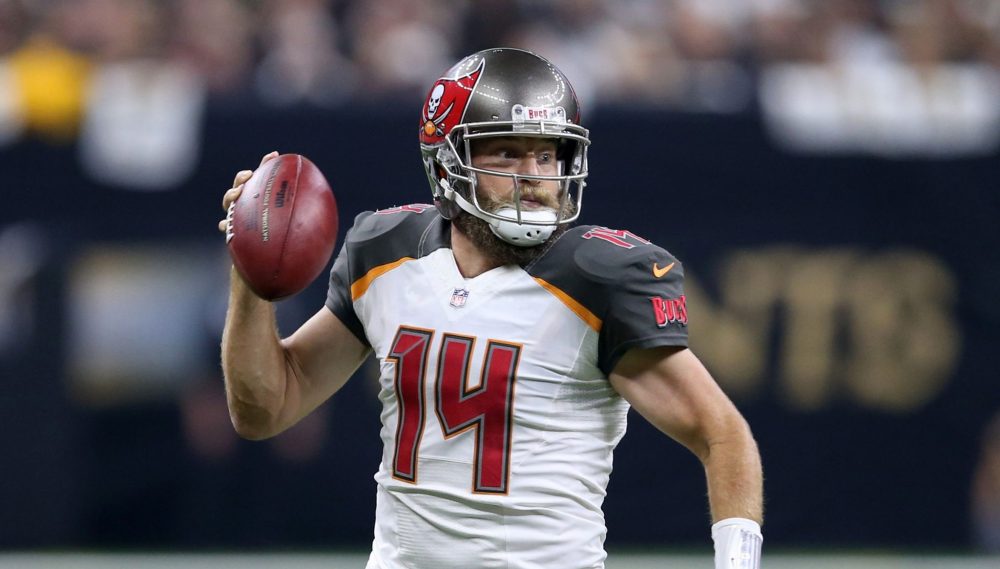 Week 2 of the NFL season is here and fans of the Buffalo Bills are panicking.

However, if you followed by picks last week you are celebrating because I went 11-4-1. Had to have that one tie so I could feel like a member of the Cleveland Browns.

This great week has me in first place in the Handicapping Sports Staff pick ’em pool and I am looking to keep that going this week. So let’s get right to it. As with last week, I will be using the spreads that we use in the pick ’em league.

The Ravens came out and embarrassed the Bills in what was a monsoon in Baltimore. The Bengals also picked up a win over the Colts in Andrew Luck‘s return. Thursday night games are always a crapshoot but after the way the Ravens played so well in horrible weather, I’ll go with the elite Joe Flacco in this one.

This is a tricky one for me. The Redskins did easily defeat the Arizona Cardinals while the Colts defense couldn’t stop Andy Dalton at home. I don’t know what it is about Mr. Luck that has me leaning toward the Colts. Maybe it is the fact he now has a game under his belt after a long layoff. Taking the Colts on the spread, although I wouldn’t take them on the moneyline.

The Falcons had all offseason to prepare for the match-up against the Philadelphia Eagles and proceeded to lay eggs in the red zone all night. Meanwhile, the Carolina Panthers beat the Dallas Cowboys by the exciting football score of 16-8. The Falcons should be a Super Bowl contender but continue to disappoint. It will be a close game and I will stick with the rest of the staff and take the Panthers on the road.

Aaron Rodgers is not human. His heroic performance in Week 1 demoralized Chicago Bears fans once again and protected DeShone Kizer from further embarrassment. His status is up in the air but I won’t doubt him, at least at the time of writing this on Thursday. If he plays, the Packers take this one easily.

This one won’t even be close. Josh Allen will continue to get drilled behind this offensive line. Sorry Bills fans, but things aren’t looking great in 2018.

The Steelers are pissed after tying against the Browns. Too bad they have to go up against a Kansas City Chiefs team that took down the Chargers last week. Patrick Mahomes is the real deal. Ben Roethlisberger is trending toward retirement.

Soooo, the Jets are good now? That defense made Matt Stafford look foolish on national television and Sam Darnold looked like an All-Pro. Things will only go better at home against a below-average Dolphins squad.

Carson Wentz remains out and Fitz Magic is alive. Let’s have some fun with this one.

The Browns shocked the world with a Week 1 tie that should have been a win. The Saints lost to Ryan Fitzpatrick. Simple math here.

The Cardinals did get whooped by the Redskins but I still avoid these giant spreads so early in the season. The Cardinals will bounce back enough to cover. Josh Rosen time is approaching.

I have zero faith in the Lions after that Week 1 performance. The Jets made Matt Stafford look like a rookie. It’s Jimmy G’s time to shine.

The rematch! The Jaguars are the real deal. Too bad they have to take on the team that has been the real deal since the start of the new millennium. This is essentially a toss-up.

The Raiders really could have used Khalil Mack on Monday. That will go down as one of the worst trades in NFL history as the Raiders start a rebuild before heading to Las Vegas. I feel bad for their fans.

This is one of those games where you go “oh yeah, those teams exist.” Flipping a coin…

Both of these teams enter the game 0-1, but the Giants looked like the better team. The Cowboys are an average team that is only focused on because of prestige.

Another average team taking on a team that had a heartbreaking loss in Week 1. The Bears looked solid and will use that Week 1 learning experience to pick up a win on national television.