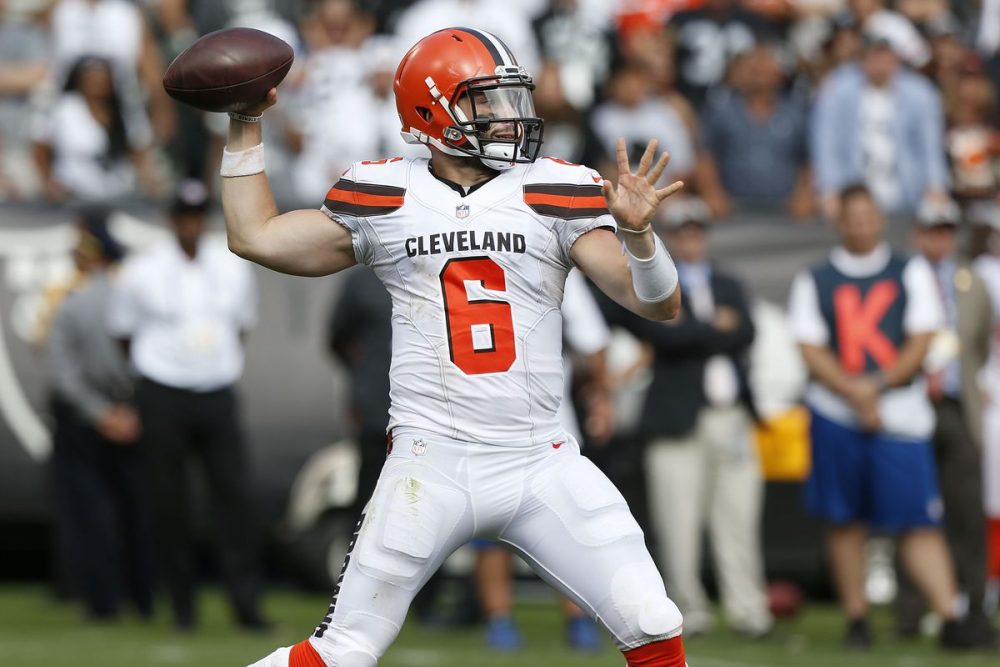 It is a hectic week in the world of professional sports. The MLB playoffs are taking place, the NHL has returned and the NFL is just getting into the heart of the regular season.

This is a yearly occurrence and nothing seems to be able to slow down the focus on football.

Last week was a rough one for me on the betting lines. I had the worst record of anyone on the staff but I’m still close enough to the .500 mark on the year so I haven’t yet lost all credibility.

Let’s get right into this week’s games.

Remember when this was a rivalry?

This game should be closer than the spread indicates now that Andrew Luck is back, even if he isn’t trusted to throw a Hail Mary. His Colts are fresh off a 37-34 defeat against the Houston Texans while the Patriots recently dismantled the Dolphins.

The Patriots should win in this game but it will be closer than what the oddsmakers are predicting.

I have to stay loyal and go with the Browns. The team is back at home and Baker Mayfield just put up 42 points in his debut. That is just insane.

The Ravens seem to be for real but the Browns aren’t too far off. The home team will bounce back from last week’s loss and win late in this one.

Talk about a tough game to predict. Perhaps the most dynamic offense in football is going up against a defense that has allowed an average of 14 points per game so far this season. But while the Jaguars defense is great, Patrick Mahomes is going to light them up. He is just too good to stop.

I’m not sure why this one is so close. The Bills shocked everyone in Week 3 but the Titans are for real. This one won’t be close as the Bills continue to trend toward selecting No. 1 overall in the draft.

The Giants are not a good football team and should have drafted a quarterback instead of Saquon Barkley. They are averaging only 18.3 points per game on offense and are taking on a Panthers team that just had a week off.

Sam Darnold has shown flashes of success but this spread is confusing. Denver nearly beat the Chiefs last Sunday. They should easily take care of business against the Jets.

Le’Veon Bell is coming back in a few weeks, but that doesn’t help the Steelers right now. This is a matchup of two teams that have disappointed fans so far in 2018. The Falcons have put up a combined 73 points in their past two games, which have both been losses.

The Steelers’ only win on the season came against a Tampa Bay squad that doesn’t look so great now. The Falcons will save their season and take this one on the road.

Sorry, Detroit. Aaron Rodgers will take this one as he usually does.

Both teams come in with 3-1 records but had much different experiences in Week 4.

The Dolphins were destroyed by the Patriots while the Bengals won a thriller in Atlanta. I see this one being within a touchdown and thus a bet on the Dolphins seems safe here. I’ll chalk up the loss to the Patriots as a result of Tom Brady and his teammates actually playing up to their potential.

The Raiders finally picked up a win last week but the Chargers are a playoff contender. This is more of a neutral site game than a home game for the Chargers but the Raiders will not put up much of a fight.

These are two very bad teams. Take the one that doesn’t have the -57 point differential through four games.

The Eagles are looking rather average to start the season and should be 1-3 after being gifted a win in Week 1 against the Falcons. The Vikings had a long break and nearly took down a Rams team that looks like one of the best teams in football.

This is arguably a toss-up but I still have faith that the Vikings will return to the contention conversation with a big win.

As I just said, the Rams look elite. However, this high spread on the road scares me. I may look back on this as dumb, but I just don’t see this one being a big win for the Rams against a Seahawks defense that allows just over 20 points per game.

The battle of Texas that no one really cares about. The Cowboys are extremely mediocre and the Texans should be able to beat them without much trouble.

The Redskins had a week off after beating the Packers, while the Saints are fresh off a win over the Falcons. I think the Saints will indeed win but not by over six points.