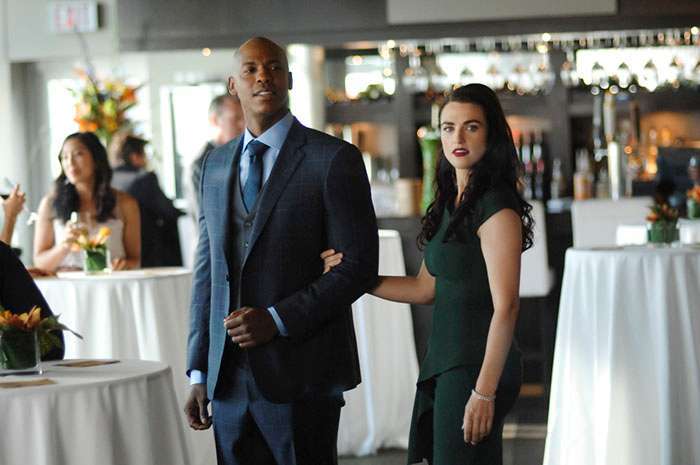 This week’s episode of Supergirl season 4 was the strongest of the season so far. Everyone got on the same page as it dawned on each of them how serious the threat of anti-alien nationalists is. I wish this had been the premiere.

The episode felt like Supergirl in a way that previous episode of the season haven’t. For instance, it opened with everyone happily having brunch as friends on a rooftop party. These are always the scenes where Supergirl shines.

And speaking of that rooftop party scene, the most exciting thing on the show right now is the blossoming relationship between Brainiac 5 and Nia Nal. Yes, it’s off-putting that he told her that he’d found out her exact address and daily routine. But, fortunately, he’s cute. Seriously, I don’t ask this much from this show. I just need Brainiac in a flannel shirt getting tipsy and clumsily flirting.

Meanwhile, the main episode plot had Kara Danvers battling Parasite, who’s taken Agent Jensen as a host. Parasite can steal the powers of any alien. I find this premise a little hard to believe. Aliens aren’t the same as metahumans. They don’t just have “powers,” they’re completely different creatures. But, as a plot device it’s fairly effective.

Meanwhile, James Olsen dealt with the knowledge that Guardian has become a hero of fringe groups on the right. Lena Luthor was painfully misguided for most of the episode. She discouraged James from disavowing these people and expressed surprise that “one of our top centrist commenters” would have bigoted opinions. It’s realistic that a billionaire would act like this, but it makes it hard to care about her.

Like Lena, Kara was painfully behind as she read commenters from the fringe in complete shock. And Alex Danvers was surprised to find out that the US Government is also anti-alien.

None of this was exactly out of character. Kara is supposed to be naive. Lena is a sheltered billionaire. Alex is part of the military apparatus. It all makes sense, but it makes me feel like I’m constantly in search for someone to believe in. Hopefully this was a turning point. I’d like for the rest of Supergirl season 4 to feature the characters making hard stands, not reading the same internet comments and being newly horrified.