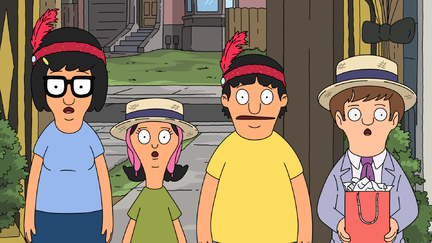 This week’s episode of Bob’s Burgers season 9 highlighted Edith Cranwrinkle, who’s been a minor characters for years. The episode showed a little more of Edith’s perspective without taking any big swings in terms of revealing her character.

In a moment of pity, Bob Belcher agreed to drive Edith around. Things took a turn when he found out that she’s trying to get revenge on a rival. Complicating things, that rival’s son was Detective Bosco. Bob regretted his kindness when he found out that Edith was exaggerating how sick she was. But, he still eventually learned to empathize with her. The plot turns worked fine but none of them were very exciting.

In the more interesting plotline, the Belcher kids went to a birthday party for a kid named Colton. Guest stars Andy Daly and Kerri Kennedy-Silver were great as Colton’s parents. They were social media junkies who were only using Colton’s Great Gatsby themed birthday party for Instagram posts. The Belcher kids sympathized and Louise Belcher led the kids in rebelling by picking their noses every time Colton’s parents tried to take pictures.

The party plot was significantly more modern than most Bob’s Burgers plots. For the most part, Bob’s Burgers has always felt like it could’ve just as easily aired ten or twenty years ago. Taking on Instagram-obsessed parents was a risk, but it worked and fit in with the rest of the show.

This episode also had a c-plot. Teddy recruited Linda Belcher to help him learn to eat sushi before a date. A character being grossed out by sushi felt incredibly tired, but it worked a little bit here because Teddy is so weird. Gags like someone accidentally eating the wasabi were elevated slightly by Teddy’s earnest character and Larry Murphy’s always great voice acting. But, the plot still felt tacked on and never really got interesting.

Also check out my review of last week’s episode of Bob’s Burgers season 9.