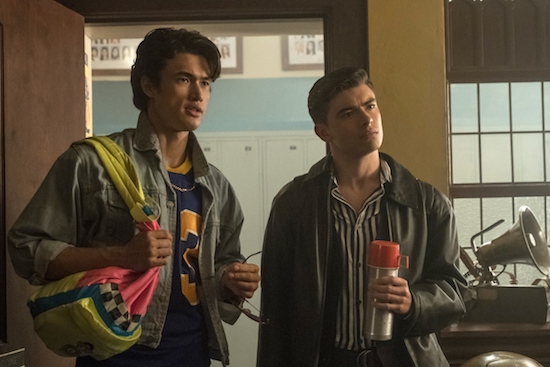 This week Riverdale season 3 did a flashback episode that took place mostly in the 90s. The result was the first great episode of the show since season one.

The episode opened with Betty Cooper asking Alice Cooper what she knows about Griffins and Gargoyles. Alice told an interesting story about how the game took control of her generation. The Griffins and Gargoyles plot this season has been frustrating, but this episode actually presented in an interesting way. I wish that from the beginning Riverdale had focused on how the game affected friendships and what sucked people into it, rather than jumping into the horror plot with no emotional framework.

The aesthetic aspects of this episode were perfect. The wardrobe and soundtrack were great. It was enjoyable seeing all the young actors play their parents, although some were better than others. KJ Apa was the absolute standout as Fred Andrews. His performance nailed it and the way he was styled to look like Dylan McKay from Beverly Hills 90210 was fun. The visual reference actually made sense and added to the episode instead of feeling like a needless carbon copy.

It would be nice to think this episode marks a turning point, but it’s more likely that it was a fluke. I feel frustrated because “The Midnight Club” so perfectly captured what Riverdale should be. It showed a bunch of characaters who are truly kids. They were all overwhelmed by their personal problems, looking for fun and unable to cope with the horrors they witnessed.

There was an immediate contrast when Alice’s story ended and Betty jumped into continuing to investigate. Betty’s detachment as she proclaimed herself a great detective was the exact opposite of Alice’s relatable fear and shame.