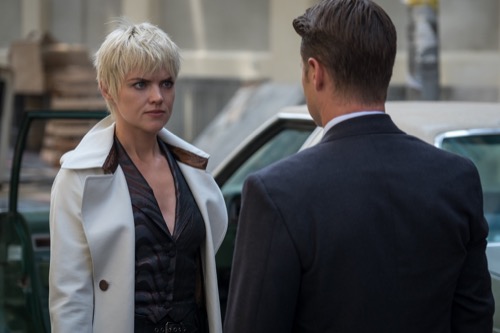 This week’s episode of Gotham season 5 felt like a horror movie. The creepy imagery, flickering lights and jump scares added a stylistic layer. At the same time, the episode still fit in with Gotham’s overall aesthetic and tone.

While this episode was pretty generic, the genuinely scary touches helped it stand out a little. The images of men who’d been killed by Ivy Pepper’s overgrown plants were particularly arresting. The creeping horror in that sequence was executed perfectly.

This was presumably Ivy’s final episode and it did a decent job sending off this mess of a character. Nothing was going to make this version of Ivy fully make sense at this point. But, Peyton List gave a great performance and her writing was a nice mix of sympathetic character and outright villain. Selina Kyle’s monologue did a nice job of bringing her arc together.

Meanwhile, Jim Gordon and Harvey Bullock tried to protect the children of Gotham. Their fight against the opportunistic predators who are running the city was enjoyable. So far, this season has done a good job of portraying Jim as a good man in over his head in this city.

Ed Nygma was off in his own world in this episode. I enjoyed his scenes— probably more than anything else in this episode— but, it’s odd watching him have his own separate hijinx as even minor characters like Scarecrow and Mr. Freeze control the city. But, his scenes had the humor and homoeroticism that I want from Ed scenes so I have no real complaints about them.

The episode seems to be ing the story further towards a sloppy romance for Jim and Barbara Kean. Barbara has come along way and the idea of a generic romance and unearned redemption is really dampening my enjoyment of this season. Hopefully, future episodes will prove me wrong in some way.