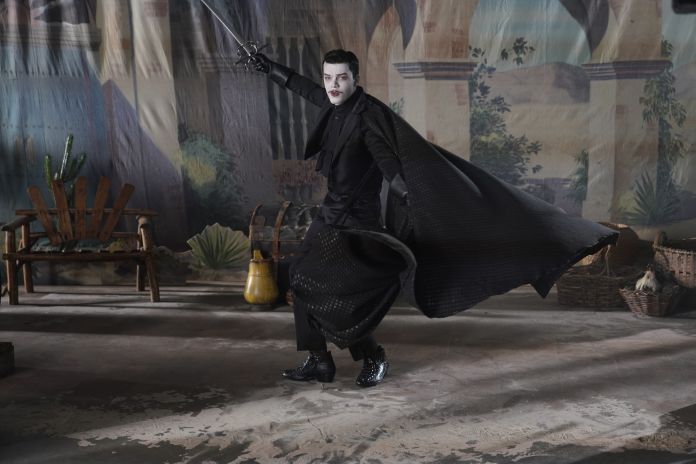 This week on Gotham season 5, Jeremiah Valeska’s big plan came to fruition. I’ve been skeptical of Jeremiah, but this episode was Gotham at its horrifying, whimsical best.

Jeremiah not only kidnapped Alfred Pennyworth, he also kidnapped a couple and, with help from Jervis Tetch, hypnotized them to act like Thomas Wayne and Martha Wayne. He planned out an elaborate recreation of the night Bruce’s parents died.

The recreation was incredibly well done. Watching the helpless, hypnotized actors play their parts was as scary as Gotham’s ever been. But, despite the very real horror, touches like Jeremiah casting himself as Zorro in a black-and-white movie made this episode feel almost like the old Adam West show. As usual, Gotham struck a perfect tone.

Jeremiah’s obsession with Bruce was great and played perfectly by Cameron Monaghan. At first I didn’t like how underwritten the set up of their relationship was. But, now that it’s clearly a completely one-sided relationship, with Bruce emphasizing that he doesn’t care about Jeremiah at all, it works great. I legitimately laughed out loud at some of Jermeiah’s over-the-top obsessive moments.

Meanwhile, Jim Gordon and Lee Thompkins had some emotional talks in light of Jim getting Barbara Kean pregnant. In an emotional moment, she brought up the loss of her own baby. Jim and Lee were a dynamic team when they outsmarted Tetch and the episode came together well when Jeremiah put them in the roles of Bruce’s parents.

This episode also revealed that Selina Kyle wasn’t truly teaming up with Oswald Cobblepot. She was rightfully angry at him for killing Tabitha Galavan. After her betrayal, Oswald asked Ed Nygma to leave town with him instead. The fact that Oswald and Ed are getting long well enough to run away together is tantalizing. It’s also an amazing detail that they’re constructing a submarine.