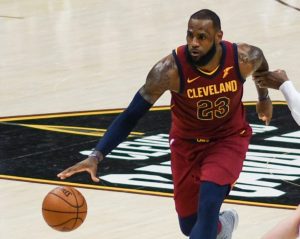 Michael Jordan or LeBron James? For the past several years (longer for all the hipsters that jumped on LeBron’s greatness in high school; or so they say), the conversation of who the Greatest Of All Time (GOAT) is in the game of basketball has centered on this duo. They’re forever connected like peanut butter and jelly, ham and cheese, and pineapple and pizza… I’m a big fan of the latter (don’t hate me), and obviously, considering my analogies, I am in severe need of both food and help.

What, unfortunately, gets lost in the mix of “Jordan never lost in the Finals,” “LeBron plays more of a team game,” and “If Jordan played now without hand-checking…” are the players who arguably deserve to also be under consideration. So, I present to you below, in alphabetical order, players that are in that second tier of GOATs when you really want to get heavy into it.

But, first, some criteria.

Obviously, stats are going to play a role here; as the great Jay-Z said, “men lie, women lie, numbers don’t.” Besides, aren’t statistics the basis, the impetus, the core of any sports argument? Other things put into the pot for this GOAT stew will also be a pinch of All-Star selections, an ounce of MVPs, a dash of All-NBA teams made, a spoonful of championships, as well as an undeniably delectable intangible impact on the game and its culture. 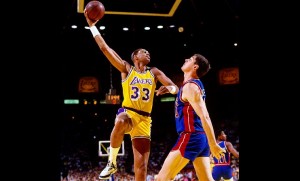 Abdul-Jabbar has been the all-time points leader since 1984 when he surpassed Wilt Chamberlain’s 31,419 points; Kareem finished with 38,387, retiring after the 1988-89 season. To this day, no one has surpassed him. Will LeBron catch him? As of this writing, he’s up to 34,087. If he stays healthy for two or three more seasons, King James just may take that crown.

But, back to Cap. He’s been the paragon of consistency, playing 95 percent of his teams’ games throughout 20 seasons (1560 out of 1640 games), which places him second in total games played behind Robert Parish (1611). And while you can make an argument that Kareem’s numbers are “padded” because he played for so long, and I’ve heard this argument, all I can say is SO?!?! Can you even fathom how difficult it is to stay healthy and produce at a professional sports level for that long? The answer is no, so give props to the discipline involved. And as a side note, doing everything he did while still being socially active in his community during his time, well, extra props to Kareem.

What really sets Abdul-Jabbar, literally, above all others though is his famous skyhook; a shot both simple and difficult at the same time. Simple in movement and concept – keeping your shot release furthest away from the defender, protected by your body – and difficult in its mastery and for the defense to block the shot. It’s considered the most unblockable shot in the game, although James Harden’s step-back is traveling its way up that short list. See what I did there?

Kareem garnered attention starting back in high school as Lew Alcindor at Powers Memorial where he won three straight New York state titles. He went on to UCLA where he won three NCAA titles (freshmen weren’t allowed to play on the varsity team at the time, otherwise it would have been four titles). He won his first NBA championship with the Milwaukee Bucks in his second year, and then five more times with the Los Angeles Lakers. Abdul-Jabbar played a primary role and won for every team he put a uniform on for. Every. Team. If that’s not GOAT-worthy material, nothing is.

And, one final note. Before everyone was taking a piece of crumpled paper, shooting it at a garbage can, and yelling, “Kobe!” they were taking hook shots and yelling, “Kareem!”

Speaking of Kobe… admittedly, it’s difficult to talk about Kobe nowadays since he passed earlier this year. What I’ll miss most is seeing the influence he had on both the NBA and women’s game – AAU, college, and WNBA. It was a given that his daughter, Gianna, was going to fulfill her legacy as the Mambacita, and take over wherever she laced up her kicks, just like her pops did. After all, partly because of a mix of her ability and her dad’s place in the annals of hoops, the top HS player, Paige Bueckers and top college player, Sabrina Ionescu, both trained with her. They were her basketball sisters and Kobe their basketball dad. Gianna was on the path… it was way too soon for her to get off it. Rest in power.

To current NBA players there was always a family vibe as well – LeBron, Dwyane Wade, and Kyrie Irving among others saw Kobe as a big brother. That Mamba Mentality was attractive and engaging to them, and others. When a retired Bryant set out challenges to NBA players in 2017 on social media, they took it to heart. No one more so than reigning NBA MVP, Giannis Antetokounmpo (I swear I spelled it without looking it up; legit) who accepted the challenge to be MVP and achieved the goal. Imagine having that much pull with players? To inspire one of them to be MVP? That’s impact.

So, why would other pros look up to Kobe? Was it his work ethic, his insatiable need to get better, that relentless pursuit of being the best ever, or that “winning a championship every season” standard? It was all of it. The 4am workouts, perfecting the mechanics of footwork, wanting to be better than Jordan, and kissing the Larry O’Brien trophy to finish off a successful season. All of it. As a basketball coach, I usually say a couple of things (okay, I say a lot of things, and sometimes it’s profane) that remind me of Kobe:

In any case, totally forgot to talk numbers regarding Kobe, but that’s what usually happens when you actually saw a player play; in this case, Bryant throughout his whole NBA career. Sure, I saw several of Kareem’s, but they were at the tail-end, so it’s a little different. 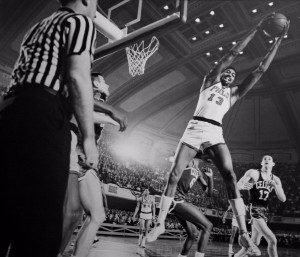 If you ever speak to an old old-head, and you’re talking about the GOAT, they will likely insult you first for being so young and dumb, and then talk about – with high reverence – Wilt “The Stilt” Chamberlain. And then tell you to get out of their presence for being ignorant in not mentioning Wilt first. However, that last part may just be specific to me; everything before that, high probability of happening.

Wilt was big, strong, agile, and attacked the rim like it owed him money. He was so good, the NCAA and NBA had to change or adjust rules because of him. The one that I always think about is not being able to cross the free-throw line after your shot until the ball hits the rim. This was significant relative to Wilt because he was horrible at shooting free throws and used to shoot, go for the offensive rebound, get it, and dunked or layed it. There’s a legend that he would also dunk it from the free-throw line. The aforementioned old old-heads would smack me across the head to illustrate how enamored they were of this.

Quickly, some other rules involved here – no inbounding over the backboard, which allowed Wilt to jump higher than everyone to catch the ball and then dunk it; no offensive goaltending of any shot within the cylinder; and, of course, the widening of the lane. Chamberlain was so good, they had to make it more difficult for him, but they couldn’t keep the man down.

Wilt is the all-time rebounds leader with 23,924 boards, which is a record I don’t think will be ever be broken (along with John Stockton’s assist and steals records). For relativity’s sake, Tim Duncan, who played 19 seasons, finished with 15,091 and he’s generally considered the greatest power forward of all time. And what is the primary role of that position? To rebound. Obviously, Wilt is also tops when it comes to rebounds per game (22.9).

Chamberlain is also the all-time leader in minutes per game with an astounding 45.8 MPG, meaning he only missed 2.2 minutes of time on the court. In today’s era of load management, I can see Stilt looking down from above, shaking his head, and saying, “P***ies.” He’s 10th in total minutes played (47,859), but played six less seasons than the leader, Kareem with 57,446. Immediately, the thing that stands out about Russell is the amount of championships he’s been a part of, as both a player and a coach – he won two titles with the Boston Celtics in a player/coach role. Russell has the most championships of any NBA player in history, making the playoffs every one of his 13 seasons, playing in 12 NBA Finals, and winning 11. It’s only appropriate that the NBA Finals MVP trophy is named after him.

While Russell’s offensive output isn’t as stellar as you might have thought, it was his defense and BBIQ that clearly made him stand out. The NBA didn’t start keeping stats for blocks until the 1973-74 season, so we’ll never tangibly know how many rejections Russell had. However, if you were to infer – considering his team’s success and looking at old highlights – it’s safe to say that he probably averaged 37.2 blocks per game. Hyperbole? Sure, but you get the idea. But, here’s what punches you in the face about his defense, he didn’t just block shots, trying to look good or to send an emphatic message to the other team, but he actually re-directed them so that his teammates could recover the ball and head downcourt. As they would say in Beantown, smaht.

Russell isn’t on a lot of statistical all-time lists, but he sits in second place behind Wilt in total rebounds (21,620 vs. 23,924), rebounds per game (22.5 vs. 22.9), and minutes per game (42.3 vs. 45.8). And, going back to Russell’s defensive impact, he finished first in Defensive Win Shares (estimated number of wins due to a player’s defense) in 11 of his 13 seasons (second and third in the other two seasons) and is the all-time leader with 133.6, which are total wins because of defense alone.

There it is, my second tier of players in the GOAT convo. Surely, there are differing opinions, perhaps some visceral outrage at the exclusion of player X, but that’s fine. Join the debate in the COMMENTS section below.