With a 4-1 series loss to the Los Angeles Lakers, the Houston Rockets capped off another disappointing NBA season that will surely see them once again go back to the drawing board and modify their extreme game plan that could be going out of style as quickly as it came in.

The Rockets’ game plan is based on the idea of high variance, the concept of which is to shoot a lot of threes and beat teams with offense rather than defense. Even though three-point shots are less likely to go in than two-point shots, the Rockets’ idea is to shoot enough threes that even missing a lot will still allow them to beat teams that make a higher percentage of lower point shots.

The implementation of this idea comes from Daryl Morey, who is the general manager of the Houston Rockets. Morey is a very analytically smart man and is a co-creator/chairman of the Massachusetts Institute of Technology Sloan Sports Analytics Conference, where some of the biggest minds in sports get together to discuss analytics in sports. Morey has always been very high on the emphasis of using analytics in his game plan of shooting a lot of threes; his style of play was nicknamed, “Moreyball.”

“one key insight with the three versus the two that nobody really gets, but is a big factor in why it is worth so much, is if you go 2/6 from three, it is the same as going 3/6 from two. There’s also that one extra miss with the three, and that extra miss can get rebounded between 20-35 percent of the time and that extra possession is worth an extra point.”

When Morey became General Manager of the Rockets, the team did not have a star player or even a supporting cast that could begin to implement this idea. In 2012 Morey got his star, acquiring James Harden from the Oklahoma City Thunder, giving a massive boost to the idea of Moreyball; now all Morey needed was the perfect coach to run the offense. That coach would be Mike D’Antoni, who would join the team before the 2016-17 season and bring massive changes to the offense.

In the 2015-16 season, before D’Antoni joined the team, the Houston Rockets shot 60.9% of their shots from two-point range, which meant only 39.1% of their shots were from three-point range. In D’Antoni’s first year, those numbers would massively shift, with the percentage of two-pointers falling to 51.3% and the three-pointers jumping to 48.7%. In this season they lost in the Conference Semifinals, but there was a massive positive in the campaign, James Harden won the MVP award for his exceptional play, averaging 29 points and 11 assists per game. Before the next season got started, the Rockets wanted to find Harden another star to go alongside him and they traded for Chris Paul from the Los Angeles Clippers. In the 2017-18 season, the Houston Rockets got even crazier, attempting a ridiculous 52.5% of their shots from the three-point line, becoming the first team to ever shoot 50 percent of their shots from three. This particular season saw them lose in the Conference Finals to the Golden State Warriors, in a series remembered for the failure of Houston’s offense. In the next season, the Rockets shot 52 percent of their shots from three and fell, somewhat embarrassingly, in the Conference Semifinals to the Warriors once again. The Rockets figured that the partnership of Paul and Harden was not working, so they sent Paul to Oklahoma City in exchange for former NBA MVP Russell Westbrook in an attempt to try something different. In the 2019-20 season, they took 51 percent of their shots from three and, once again, lost in the Conference Semifinals to the Los Angeles Lakers. This precipitated the parting of ways with Coach Mike D’Antoni. 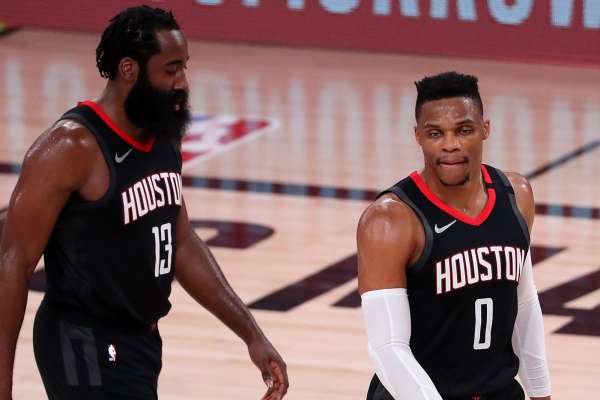 The question that many people asked after the Rockets’ failures was, what went wrong with Moreyball?  The answer lies in their shooting percentages in moments that really mattered. In the 2016-17 playoffs, their shooting percentage splits were relatively the same as the regular season, with 49 percent of shots coming from three. However, they only shot 34 percent from three, the 11th worst out of the sixteen playoff teams. They bowed out in the Conference Finals to a very superior San Antonio Spurs team while shooting an average of less than 32 percent in all four of their losses. Not only were people skeptical after they shot poorly, but they lost to a Spurs team that emphasized the mid-range game and stayed away from threes.

The Rockets almost proved the haters wrong in the 2017-18 playoffs as they took a 3-2 lead on the powerhouse Golden State Warriors. What came next was a collapse that would end with the Houston Rockets missing 27 straight three-pointers in Game 7, losing the game by nine. That game was the low point of Moreyball, with the Rockets shooting 7/44, 16 percent from three. Even shooting a measly 25 percent from three would have won them the game, but alas, all the Rockets did was prove the haters right, and many people wanted this experience to end. In the whole of the playoffs, they shot 34 percent from three, 13th out of 16 playoff teams. In the same interview with Hikaru Nakamura, Morey said about the series,

“With Golden State, we took a lot of criticism, we took even more threes against them. They were the better team, and if the other team is better than you should go for high variance. People are critical because we missed a bunch of threes, I think we set some record of missing the most threes in that Game 7, yeah that sucked, but we had no chance of being in Game 7 unless we played this high variance strategy.”

Morey is right in his thinking, this Warriors team was a very strong one that went on to beat the Cleveland Cavaliers in four games and became back-to-back champions. It is very much a shame that they could not prevail, as it is likely they would have gone on to win the NBA Finals, and the narrative around the Rockets, Harden, and Moreyball would have been drastically changed for the better.

In the 2018-19 season the Rockets met the Warriors again, losing the series, 4-2. Looking at the stats is somewhat of a head-scratcher — the Rockets shot better than 40 percent  in two of their losses and that bolstered the point that this idea would never work, as the Rockets shot almost 37 percent from three in the playoffs, which was second just behind the Warriors. The Warriors experienced a lot of injuries in the postseason and looked to be out of the running for the following season; many wondered if now was the Rockets’ time. However, it came out that there was unrest in the locker room and it led to a Chris Paul-for-Russell Westbrook trade in a “win now” attempt by the Rockets organization.

The 2019-20 season brought even more extremes to Moreyball. Midway through the season their only playing center, Clint Capela, was traded away (38-year-old center Tyson Chandler sat on the bench), making 6’5” P.J. Tucker their center. Tucker is a very built guy and was strong enough to battle against some of the bigs in the NBA, but against the likes of Anthony Davis, the height difference was too much to stop. In a season of randomness with the bubble playoffs, one thing stayed the same —  a Western Conference Semifinals loss for the Houston Rockets — they lost to the Los Angeles Lakers and it really wasn’t even close. The Lakers just had too much size and strength for the Rockets to handle and when the series was over, Coach D’Antoni decided to not extend his contract, leaving Morey to find the next coach for his style of play. 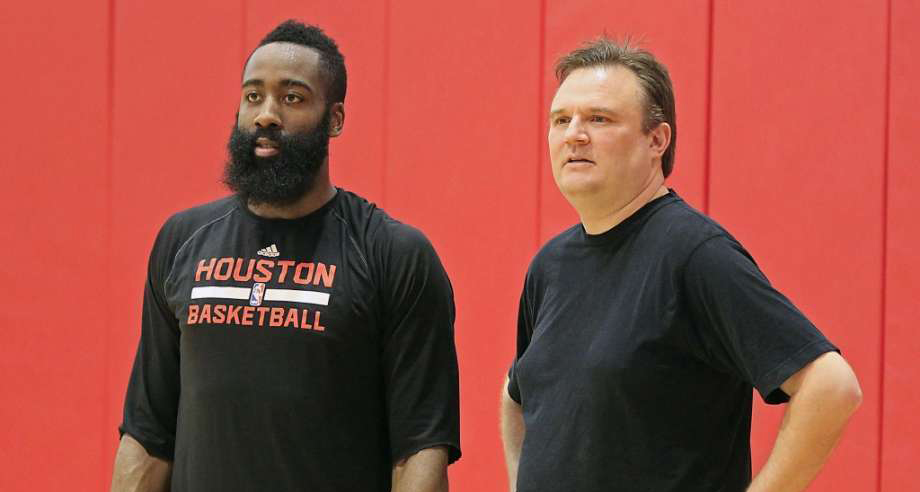 Sadly for the Houston Rockets, the future of the team does not look very bright and their championship window is soon closing. In that Westbrook-for-Paul trade, the Rockets gave up a lot of first round picks, they gave up a 2021 pick in a swap deal with either the Thunders pick or the Miami Heat pick (will most likely be this one as it will be 29th or 30th). They have their 2022 and 2023 picks, but they do not have their 2024 pick, their 2025 pick is another swap deal with the Thunder, and they do not own their 2026 pick. Little quality youthful talent will come into the squad which is not good for a team past their 30s. The only Rockets that get playing time and are in their prime ages (26-30) are Austin Rivers (28), Daniel House (27), and Robert Covington (30, but is turning 31 this season). James Harden is 31, P.J. Tucker is 35, Eric Gordon and Russell Westbrook are 31 soon to be 32. This team has maybe two to three years left before the team will get too old. Westbrook already has injury problems that could get worse as he gets older and could constrict the championship window even more.

Not only are the players the problem, but the teams around them. The Western Conference will be difficult to get to the Finals as next season, the Los Angeles Lakers and Clippers, Denver Nuggets, Portland Trail Blazers, Dallas Mavericks, and Golden State Warriors will all be contenders to win the West next year. This year was, realistically, the Rockets best year at success and it has passed by, only an astronomical trade to get younger players could change the future of this team, but that is very unlikely as most of the Rockets’ contracts are basically untradeable because of their size.

Shooting this many threes just does not seem like a sustainable strategy for the future of the Houston Rockets. They should attempt to find an easier shooting split, such as 55 percent from two and 45 percent from three; that would increase their percentage, making them just a little more effective. The departure of Coach D’Antoni will not cause many changes in the shooting percentage splits of the Rockets; as long as Morey is there, it is likely to stay in the range of shooting 50 percent threes. It is also unlikely that the Rockets will go back to having a center in their lineup, they will instead come into the 2020-21 season looking to have a full season of line-up craziness. If their recent playoffs were any indication, then maybe, even with a new coach, they could break 55 percent from three.

It is unlikely that this idea of Moreyball is the future of the NBA or can provide much success, but it surely has provided a lot of interesting moments around the NBA as their style of play grows crazier with every season.