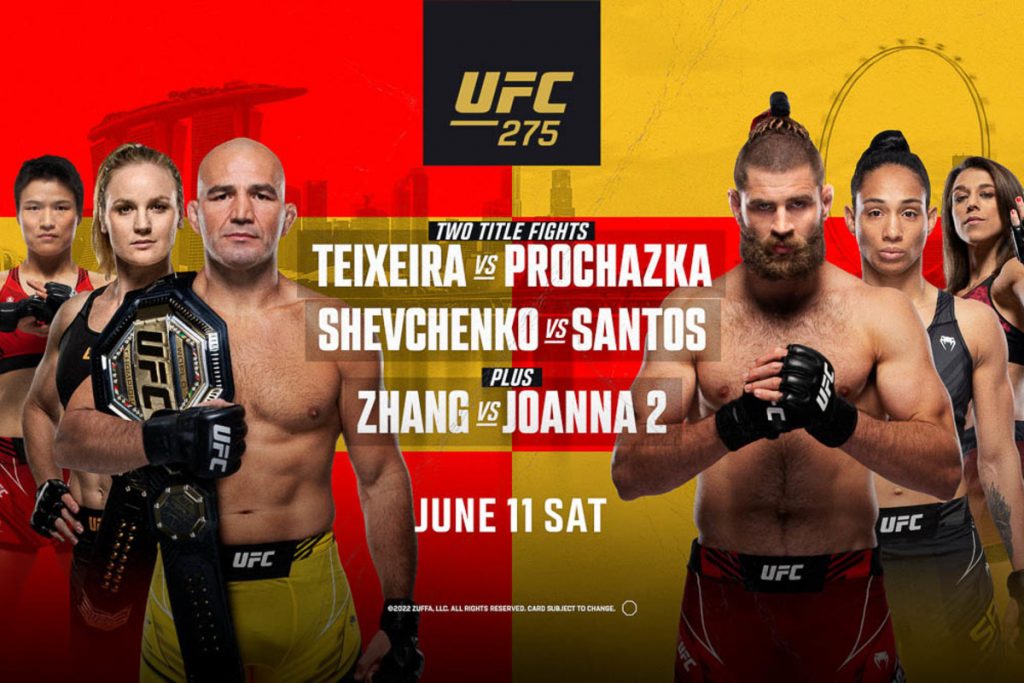 The UFC takes their first overseas event as they kick off the summer months with a pay-per-view event in Kallang, Singapore headlined by two title fights and a highly anticipated rematch between two of the most competitive women’s strawweight fighters. As always, the prelims are filled with a ton of exciting prospects. SeungWoo Choi and Josh Culibo are two of the better prospects in the featherweight division. Brandon Allen is an exciting veteran who always brings finishes to his matches. Andre Fialho is fighting his fourth fight with the promotion in the year. The matchup between Maheshate Maheshate and Steve Garcia should also bring a ton of action. As always, let’s break down the main card predictions.

After an exciting debut with the promotion in January, where he knocked out Pete Rodriguez, Jack Della Maddalena puts his name on the map for the welterweight division. He’s been on an 11fight win streak since losing his first two professional bouts in 2016. Della Maddalena packs a ton of power in his hands, as all but two of his wins have come by KO/TKO. But he faces a big challenge against Ramazan Emeev, who is mainly known for his wrestling and jujitsu. Emeev currently holds seven submissions to his name but hasn’t achieved one since 2016 with the M-1 Challenge promotion. In fact, every fight since then has gone to some form of a decision. But Emeev is coming off of a close loss against Danny Roberts, where Emeev struggles to earn takedowns and was forced to stay on his feet. As long as Della Maddalena can do the same,I imagine he earns another finish to his name with his elite striking.

Two of the better flyweight prospects the promotion has to offer, the winner between Manel Kape and Rogerio Bontorin could be set up for a title contention next. After coming into the UFC in 2019 after domination in Rizin FF, Manel Kape had a ton of hype but failed to turn it into winning production. He would lose his first two fights against Alexandre Pantoja and Matheus Nicolau and all seemed confused for Kape. But back-to-back first-round knockouts have set Kape back on the track he originally started and now has a chance to put himself in the title picture. His well-roundness has made him difficult for opponents to control. He’s always been a submission threat but the power is legit. On the other hand, Bontorin has some slickness of his own, having 11 submissions to his name. But he has been on a slump, having three losses and a draw in his last four fights. He is most recently coming off of a split decision loss to Brandon Royval. I can’t imagine Bontorin having the capability to stop the hype of Kape right now. This should be a clean finishing victory for Kape.

After one of the most exciting fights from 2020, the rematch between Weili Zhang and Joanna Jedrzejczyk is finally here. While Zhang had a two-match duel with Rose Namajunis, Jedrzejczyk had not fought since the first fight. After being knocked out in her first matchup against Namajunis, Zhang ended up losing a close split decision in the rematch. But her preparation and game plan could have certainly won her the fight. Jedrzejczyk on the other hand has openly expressed her interest elsewhere in MMA. Similar to the McGregor approach, the former strawweight champion doesn’t seem to have the same interest in fighting as opposed to fighting big matchups for money. Her inactivity could also prove to be an issue in the octagon. Nonetheless, this should be an exciting fight with a ton of activity, but I believe the odds are closer than they should be.

Valentina Shevchenko has been one of the most dominant champions in the promotion across the board. She hardly ever lets up any room for her opponents to implement their game plan against her. Her well-roundedness as a fighter makes her almost impossible to handle because of her ability to bring the heat from every aspect of her game. Her win against Jessica Andrade was filled with wrestling and ground and pound before leading to a finish. But her win against Lauren Murphy involved a lot of stand-up and technical striking. Taila Santos on the other side may be her toughest challenge since Amanda Nunes. Santos is coming off of a submission win against Joanne Wood and a four-fight win streak. Her power is immaculate and could easily bring a finish if she lands a combination. But even if Santos is one of the best in the division, Shevchenko is still miles ahead of her, I don’t imagine this fight gets close without some luck from the Santos corner.

This is easily one of the toughest title fights to predict this year. The challenger, Jiri Prochazka, has only fought twice in the UFC but has been absolutely devastating. He holds 25 knockouts to his 28 wins, including two against Volken Oezdimir and a ridiculous backward spinning elbow against Dominick Reyes. He’s about as reckless as can be, but he’s been perfect in his fights thus far. He has the highest significant strikes landed per minute amongst all active in the division. He’s been completely overwhelming for anyone who crosses his path. But Glover Teixeira has been one of the best comeback stories in the entire promotion. Since his loss to Corey Anderson in 2018, Teixeira has been undefeated. He recently won the belt with a submission victory to become the oldest fighter to earn a belt in promotion history. He’s never been one to count out despite his age and older fighting style. While Prochazka is the big bad wolf who can run the division for years to come, I think it’s not his time to do so. Glover has always been one to pull something out of his sleeve, especially in the wrestling department. If he can avoid Prochazka’s pressure and force him to bite, it could be over from there. While it’ll be extremely close, I think Teixeirawill continue his championship run and earn another defense against an up-and-coming light heavyweight.