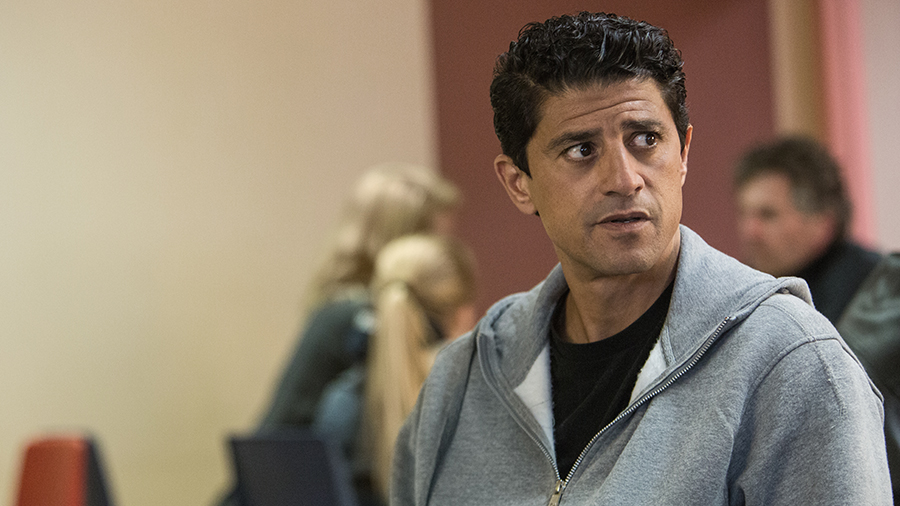 In the penultimate episode of The Missing, evidence of a cryptic nature is revealed and background information arrives in heavy doses. The episode starts in a frustratingly misleading manner. As an unknown couple discuss a personal situation three years after Oliver disappeared, their young son vanishes without a trace. This tells fans of The Missing that perhaps a serial kidnapper is still active and unidentified.

This plot point ends up being a waste of time and an unfair tease to the viewers. The boy ends up being found after it’s proven that his father orchestrated the kidnapping. In fear that his wife would take the boy out of the country, the father took a desperate measure to keep his son involved in his life. Like many recent turns in The Missing, this development leads nowhere and does nothing, but dupe the audience.

After this episode misstep, the rest of the show finds a strong form. Tony, Emily, and Julien put action into motion by visiting Ziane in prison. Julien’s stare is priceless as he likely wants to jump across the table and punish the inmate for ruining his leg. Once Julien and Tony press the former corrupt detective for information, Ziane responds by stating he’ll release content if he receives a visit from his estranged son. Ziane, you shameless and pitiful man.

A dramatic shift occurs when Malik calls Tony and claims to know that Tony killed Ian. That bloody shirt was the only piece of incriminating evidence, something Malik couldn’t have possibly known about, so where did he obtain the right to make this claim? In the past, this unlikely form of knowledge was the result of Malik’s snooping. He heard a voicemail on Tony’s phone of Emily subtly mentioning what happened to Ian. Conniving as ever, Malik listens to the voicemail before promptly deleting it.

Meanwhile, this installment of The Missing provides viewers with concrete reasons why Tony and Emily divorced each other. We even witness the moment Emily states her claim to split, a request to which Tony replies, “Fine.” Tony’s ceaseless commitment to finding Oliver has been counteracted by Emily’s passive nature and discomfort discussing the situation. That component has seethed with tension all along. In this episode, tension becomes thicker as these different coping behaviors lead to the end of a marriage.

This isn’t without flames though as Tony and Emily do experience rekindling. Tony basically admits fault in pushing Emily aside and consuming himself by dreariness. Their meaningful connection results in a kiss that both parties regret. To her credit, Emily also acknowledges blame and accepts her share for not saving the marriage. One of The Missing‘s vividly profound components is how strongly the show displays Tony and Emily’s inerasable pain. Even if they attempted to stick together as a couple, they’d always be constant reminders to each other of their shattered family.

It was discussed earlier how Ziane agreed to release information to Tony, Emily, Julien should they track down Ziane’s estranged son. Toward the end of the episode, the boy agrees to accompany our main characters in visiting his father. Once Ziane is alerted that he has a visitor, a smile cracks as we assume he realizes his son has arrived. A violent world intervenes and robs not only Ziane of this opportunity, but more importantly, takes away Tony and Emily’s potential insight into Oliver’s disappearance. Ziane is shanked repeatedly in the stomach by an unknown inmate. The cause for the murder is presumed to be Ziane’s “snitching.”

Ziane’s dead, so what’s next? Mark, you borderline worthless aspect of the show, you finally came through! Mark’s never seemed like a suspect, but something about him has always seemed a tad askew. He acts swiftly after Ziane’s murder though and confronts Malik. Pressing Malik with a potential obstruction of justice charge, Mark offers a deal. The trade goes as follows: in exchange for Mark’s decision to avoid seeking a criminal penalty against the journalist, Malik agrees to give Mark a piece of key evidence that was originally taken by Ziane.

What is the exact evidence at hand? We don’t know, but Tony does. The last moment of this penultimate showing is Tony stating that he understands the evidence and knows who it belongs to. Season 2 will feature a new cast of characters, so next week’s finale will conclude our time with Tony and company. Here’s to hoping a happy resolution is reached on Oliver’s behalf.