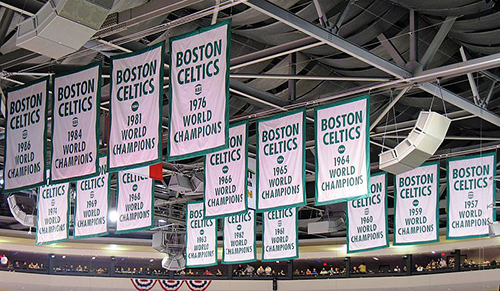 Amid so much tumult and unrest today in the world of the Boston Celtics’ offseason, rather than plunge into the muddy debacle, using editorial space to bark back a bit of the latest speculative and indistinct news, I’d instead like to shine a light on one of the reasons the C’s franchise is perhaps the greatest in the history of all sports…

While both the New York Yankees (27) and Montreal Canadiens (24) do eclipse the Celtics in titles amassed, the purely quantitative element is somewhat of a wash seeing as they’ve each been competing within their respective sports of baseball and hockey for over a century.

Founded in 1946, the Celtics – following a short, albeit impressive run by the George Mikan-anchored Minneapolis Lakers – began in the late-50s what is barely arguably, in any sport, the most remarkable dynasty ever. In 1957, the Boston Celtics won their first championship in seven games against Bob Pettit’s St. Louis Hawks; then in 1958, lost in the NBA Finals to the very same opponent. It was in 1959, however, that the team – coached by the legendary Red Auerbach and starring Bob Cousy, the original point guard wizard, as well as Bill Russell, perhaps the most dominant defender in league history – proceeded to rattle off eight titles in a row against interchanging foes of the Lakers and Hawks, both perennial powerhouses in their own rights. The lone exception of an opponent came in 1964 when they were met by Wilt Chamberlain’s San Francisco Warriors whom they handily defeated in five games.

Between 1957 and 1969, that Golden Era Boston Celtics team won 11 championships – the only other disruption coming in 1967, losing in the Eastern Conference Finals to the Philadelphia 76ers, who went on that year to win it all. Two more banners were added to the rafters in 1974 and 1976 by a team led by John Havlicek, Dave Cowens and Tommy Heinson; three in 1981, 1984 and 1986 during what can only be known as the Larry Bird Era, which consequently also saw Boston taking five total trips to the Finals and last but certainly not least, one more in 2008, with the Big Three of Paul Pierce, Ray Allen and Kevin Garnett at the helm.

In effect, the Celtics currently boast a sum of 17 titles – the most of any franchise in the NBA. Their lore is simply replete with so much aggregate mythos and mystique that to this day, there seems to be something divine about that plucky leprechaun spinning a basketball on his finger in the logo. But while there is something to be said for certain rosters that have come and gone since 1970, the reason the Celtics are as indelibly elevated as they are, really, is a compilation of countless reasons borne of that first incredible roll.

The archives are just stacked with so much grainy black and white footage of great, early Celtics’ moments – Cousy tossing the ball behind his head off the dribble in the lane to a cutting, young and crew-cut Havlicek; the wonderfully and anciently pure jumpshots splashing through the net of players like Bill Sharman and Sam Jones; the preeminent sportscast of Johnny Most during the 1965 East Finals against the 76ers when, “Havlicek stole the ball… Havlicek stole the ball… It’s all over!”; Auerbach’s cigars within the seemingly constant frame of his proud, child-like grin; Russell chasing down a breaking Jerry West and eventually felling him with what, erroneously, is known today as a Lebron-style block from behind; Russell’s formidable tarantula post-rebound stances; Russell helping in his way to fearlessly affect a new racial consciousness by boycotting the 1964 NBA All-Star Game; Russell as player-coach; Russell; Russell; Russell; the bedlam, year after yet another year, of Boston fans rushing the court; the unbridled and innocent joy of the players in the wake of their numerous victories…

It’s difficult not to glorify, even exalt the Dynasty-era Celtics. The account of their dominance is too beautiful, too cinematic, too huge. It’s the stuff of folklore – of tradition, as well as of balladry and titans – receded now into the past, yet honored, as it should be, by not only sports fans, everywhere, but also by anyone with any sense of culture as it’s evolved over the course of modern American History.