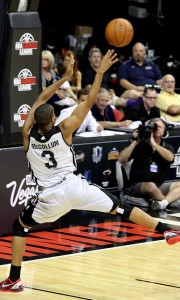 Although this year’s NBA Draft lacks the star power of some previous classes, it does boast some intriguing point guard prospects. Barring a Titus Young-like week leading up to draft day, esteemed Michigan point guard Trey Burke will be long gone when the Jazz are on the clock with pick fourteen, though there will be numerous point guard options for the Jazz:

Damian Lillard is the best thing to ever happen to McCollum, as the comparisons have numerous GMs salivating. In all likelihood, McCollum will be off the board when it comes time for Dennis Lindsey and friends to make a pick, but there’s a chance C.J. will still be there.

And although Jazz fans would love to finally have a ‘C.J.’ who can shoot consistently (sorry, Mr. Miles), I would be remiss not to mention McCollum’s awful assist-to-turnover ratio (1.07 his senior year at Lehigh) or the fact that he isn’t that good of a defender (somewhat due to his lack of speed). While it’s safe to assume McCollum will be drafted before most others, I don’t think that’s necessarily a bad thing for the Jazz.

To some degree, this Syracuse product is the Charlie Brown of this year’s point guard class. Some say he isn’t a good shooter while others claim he’s too skinny, but to me, there’s a lot to like about MCW. First off, he comes from a winning program and possesses a high basketball IQ. Super athletic and standing at 6’6” (with a 6’7” wingspan), Carter-Williams will create mismatches against shorter point guards.

And let’s compare Michael’s stats of this year with the stats of former Jazz NBA All-Star Deron Williams’ final year in college at Illinois: Deron averaged 12.5 PPG to MCW’s 11.9, yet MCW had 7.3 assists to Deron’s 6.8. MCW also produced 2.8 steals per game to Willams’ 1.0, and 4.9 rebounds to Deron’s 3.6 (the least important of the stats, but I figured I’d mention it). I admit Carter-Williams isn’t the best free-throw shooter at .694, but that beats Deron’s .677; and of course, there’s shooting percentage and three-point percentage, where Deron comes in at 43% and 36% respectively, where MCW lags at 39% and 29% – though these numbers aren’t too far from Deron’s numbers (okay, the three-point percentage being a 7-percent difference is somewhat significant, but the overall shooting percentage is close).

Although both guards had deep NCAA tournament runs and played for esteemed, successful programs, D-Will was chosen third overall and is now an All-Star, so drafting MCW with the final pick in the lottery would be a steal. Many Jazz fans claim they want more of a pure point guard and MCW can distribute, play defense, and knows how to win. If he’s there at fourteen, we need to get him.

Not long ago, Schroeder’s name wasn’t even appearing in mock drafts, but now he’s touted to be one of the top rookie point guards; heck, the Boston Celtics are rumored to be so enamored with the nineteen-year-old they promised to draft him using their pick (sixteen). At first glance, Schroeder’s stats aren’t eye-popping at 12.0 points per game and 3.2 assists in the German League, but these stats were against grown men. Milwaukee Bucks star Brandon Jennings played a year of professional Italian ball after high school and his stats were 5.5 PPG and 2.2 APG.

Scouts often tout Dennis’ ridiculous speed, but he also holds other attributes, including shooting 40% from behind the arc, being a decent defender, and possessing a ridiculous wingspan (over 6’7”). Sure, at 6’2” and around 170 pounds, he’s going to be overpowered by everyone on the court (including the referees and cheerleaders), but at only nineteen-years-old, Schroeder is only going to get stronger and more experienced and he already possesses a skill set that doesn’t hold a lot of weakness. Chances are Schroeder will be available at fourteen and if Carter-Williams isn’t on the board, I’d be OK with the Jazz selecting Schroeder.

Sure Shane Larkin has some pluses — he comes from great athletic pedigree (his father is former baseball star Barry Larkin), is widely considered to be a leader on and off the court, and can certainly shoot, pass and take care of the ball (14.5 PPG, 48 FG%, 41 3PT% with a 2/1 assist-to-turnover ratio). He was also considered a good defender at the college level, but here’s the problem — Larkin is only 5’11″. This might not seem like a big deal as there have been many sub-6’ point guards in the NBA, but the Jazz shouldn’t burn their fourteenth pick on a guy who would be abused defensively by most of the starting point guards in the NBA.

And I know, I know, 5’11” is the main knock on this guy and he does a bunch of things well, but it’s true, he’s going to be mismatched by most other guards somewhat because of his height and partially due to his T-Rex wingspan. When opposing point guards are given uncontested jump shots over Larkin, bad things will happen to Larkin’s team. So in short, the question beckons: can Shane Larkin be a starting point guard in the NBA? If yes, he’s worth the pick, but if he isn’t, don’t draft him in the lottery. I would rather draft Isaiah Canaan or Pierre Jackson in the second round than Larkin at fourteen.

All signs point to the Jazz drafting a point guard, but of course, anything can happen on draft day. The Jazz could move up or down in the draft, or a non-point guard could slide to us, causing Jazz management to go “the best player available” route. Realistically, of the non-point guards, this situation would almost exclusively pertain to forward-center Cody Zeller. Unfortunately, none of the top six picks will fall to us (no Trey Burke… sigh).

Regarding our twenty-first pick, check out my next piece—it will discuss the potential players, some of whom will certainly be available when the Jazz make their second first-round selection.