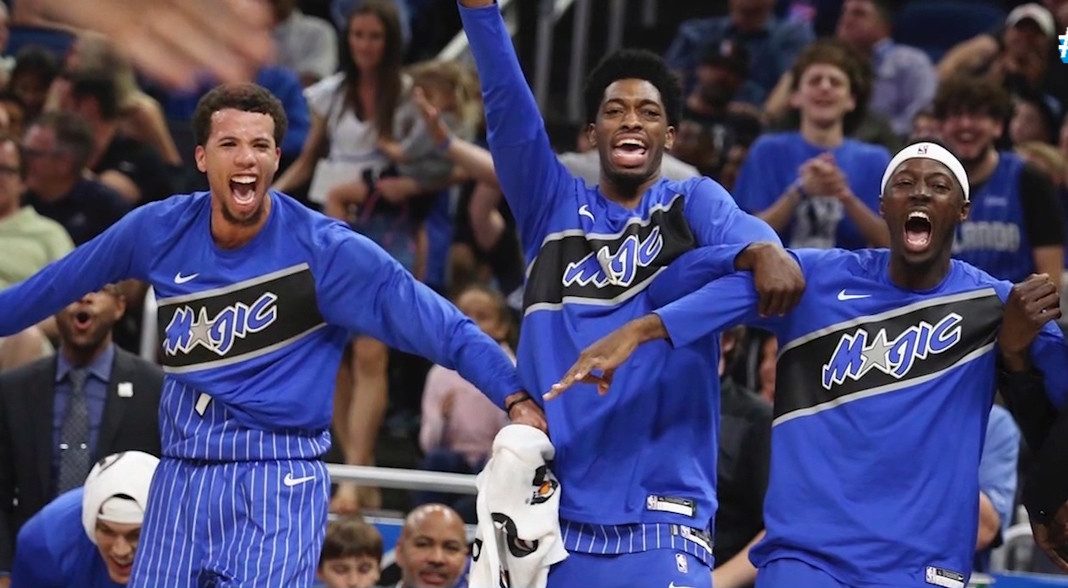 The Orlando Magic have been one of the best teams in the National Basketball Association over the last few weeks. Yes, you read that correctly. The Magic have gone 8-2 over their last ten games, including defeats of the Philadelphia 76ers and Miami Heat on consecutive nights. For the first time since 2012, Magic fans have been able to cheer their team on through a viable playoff push.

They just knocked the Hawks out of the sky, and, at the time of writing this, the Magic ended the longest playoff drought in the Eastern Conference by locking up a playoff spot by winning in Boston’s TD Garden. Even securing a low seed in the standings is a monumental accomplishment for a team that has been on the outside looking in for so long.

While the Lakers undeservedly dominate headlines and airtime, and with the Houston Rockets and Golden State Warriors getting all the championship attention, the collective NBA has all but forgotten the Orlando Magic. I’m looking at you, too, SportsCenter!

Everyone expects teams like the Toronto Raptors and Millwaukee Bucks, Boston Celtics and Sixers to be at the top of the food chain getting all the focus, but the true stories of hope and entertainment come from teams like the Magic. And there is no team like the Magic. Since January 31st, they have been in the top four teams, winning-wise, out of the entire league. They are still dealing with indifference in this time of tanking, with no room for being in the middle, but Orlando seems to be chipping away at the standings, as well as chipping away at their reputation of below-averageness.

The plight of a Magic fan…

This isn’t a Cinderella story; this is a tale of a small market team clawing its way into your peripheral. When I tell people I am a Magic fan, they, without fail, always mention the Shaquille O’Neal and Anfernee “Penny” Hardaway  era like it was last season. It’s been 23 years! A person born in that era is now graduating college. Sure, the Dwight era was great, too, but it just goes to show what the outside world remembers or recognizes about the team in Disney’s magical shadow.

Among the small market teams, Orlando always seems to get the shaft. This statement is admittedly biased, but I really want you to think about whether the casual basketball fan outside of Central Florida can name one player on this year’s roster. Even with Nikola Vucevic in the All-Star game and Aaron Gordon adding dynamic scoring to his athletic arsenal, I’d bet a pretty penny (get it?) that a random kid in, say, St. Louis probably doesn’t know who Jonathan Isaac is or that Michael Carter-Williams is now with the team.

If you’re a Magic fan, I think it means you’ve reached an above average level of self-actualization. I freely reference the Chicago Cubs before they broke their curse, because there is something about always being counted out that either evolves into fierce, unfounded hope or an overall lack of care. The Magic, over the last several seasons and a couple “rebuilds” have taken the mantle of the the latter. Who is to blame?

This isn’t all the fault of media or the league’s preference for superstar-laden, big market teams. Florida is a land of wayward bandwagon fans. After all, it is more of a football state; more so, a lot of people in Orlando are from somewhere else.

This year, the Magic celebrated it’s 30th season, and they have diehard fans. They do exist. My folks (shoutout to Steve and Debbie) are lifelong Magic season ticket holders, as well as hardened optimists, and despite becoming a bit disdainful, they have not given up their seats or their souls. My best bud, Chris Corso (who has also written articles for this rag) is now beating his chest, because he is the only Magic fan I know who hasn’t lost a glimmer of hope. He has been saying “This year is the year we turn the corner” since Vince Carter came along. To his credit, Carter had great years with the Magic. However, Chris said the same thing when we signed Gilbert Arenas.

I spoke to a few self-proclaimed proud Magic fans, and the opinions varied on hope, but one thing was clear is that they still view the Magic as their team. The following quotes are unedited.

“Seriously, nothing infuriates me more than people that have lived in Orlando their entire lives but still show up to Orlando-Miami games in a fucking Heat jersey,” exclaims Magic fan, Danielle Groen.

“Being a Magic fan is really tough, especially seeing the team not go anywhere in the past like six years. You gotta be dedicated to supporting mediocrity, yo, for realz,” says Bryan Lufkyn, a college dropout from Orlando with bad knees.

“The Magic, like a long con, will surprise you. This year, they are surprising people. Now if only the media would pay attention, we could make some real noise,” declares Mike LaFrance, a videographer who hails from Boston but went to UCF and sites the Magic as his team, and now hates the Patriots.

“I love the Magics. My Uncle David and Aunt Linda take me to games. We eat hotdogs and root for Aaron Gordon very loud,” giggles 8-year-old Elaine Vick.

The team sees the support…

Credit the team, the wins, call it some sort of combined synchronicity of both, but even the casual fans seem to be finding their way back to professional basketball in Orlando. And even the team is taking notice.

“I think the fans are a big part of it, but we’re definitely playing with a lot more purpose and a lot more balance here in this last, whatever it’s been, five or six weeks,” Magic coach Steve Clifford said.

Despite the cacophony in the stands, and the cold shoulder from the league, there is something special brewing in Orlando. The myriad of mistaken fans are chomping at the bits to point out that they were right all along, and the transplants that call Orlando home will not be able ignore the team after this season, which is another win unto itself for the franchise.

Prologue of what’s to come…

What a turnaround this year has been, and now they have secured a Playoff berth. In the last 6 seasons, Orlando has won just 32 percent of their games. This year, they have hovered around 50 percent, about to possibly win more than 40 games. And, if you remember, they have a season series tie against the Sixers, so if they capture the sixth seed and play Joel Embiid’s team, they could put up an underdog fight.

Any foray into the postseason is a positive. It will be a good teaching tool for the youngsters, as well as a huge confidence booster for a team and fanbase in need of such a shot. It is a big step forward this year, regardless of the outcome. There will be big questions for the team in the offseason, such as the contracts of Vooch (Vucevic) and T-Ross (Terrence Ross), but the playoff picture should provide enough of a distraction from year’s past to instill more chutzpah for the horizon.

Even if the NBA isn’t ready, the organization and the fans are clamoring for hoops hope. The team is young and getting better. At this stage, after the last couple of wishy-washy seasons, a sincere Magic fan can’t ask for much more. Here’s to a possible Philly upset and a second round surprise. As a Magic fan, I am personally thrilled they pulled an illusion all their own.

Interesting postscript to this…

I missed the clenching win against the Celtics, because DirectTV sucks.