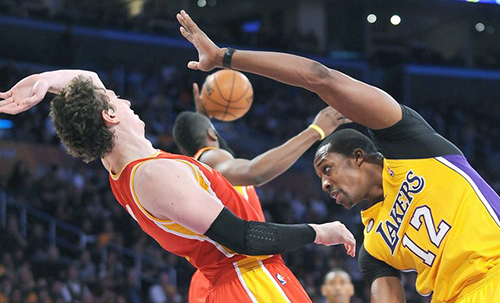 A possible Dwight Howard signing with the Houston Rockets could push out Omer Asik.

Now we know exactly who is interested in signing Dwight Howard, and it’s five teams from all areas of the country.

On Monday (well, actually Sunday), Dwight reportedly kicked things off at 12:01am ET, or 9:01pm in Los Angeles on Sunday night with a few brief words with Los Angeles Lakers GM Mitch Kupchak, which isn’t a big deal since the big man’s reps have been meeting with the team for weeks.

Then D12 grabbed dinner on Sunday night in L.A. with the Houston Rockets group, which included owner Les Alexander, head coach Kevin McHale, GM Daryl Morey, Hall of Fame big man Hakeem Olajuwon, James Harden and Chandler Parsons. It’s been widely reported that in this meeting, Dwight burned Parsons and asked the group to get one more superstar to give him two other go-tos on the team.

Once Monday actually came to the City of Angels, Dwight kicked things off with the two long shots in the sweepstakes: the Atlanta Hawks and the Golden State Warriors.

Being from Atlanta, you’d think he’d want to go there, but even after the meeting there wasn’t a ton of talk coming from their camp. Jerry West was included in the group from the Warriors who met with Dwight, and reportedly were thinking of a sign-and-trade where the Lakers would get Harrison Barnes and Klay Thompson for the center. That way Dwight would get the full $118 million/five-year contract he can only sign with Los Angeles. (Note: The Rockets were reportedly adamant about not doing a sign-and-trade, which would leave Dwight with an $88 million/4-year contract).

The final two meetings took place on Tuesday, with Dwight first meeting the Dallas Mavericks group made up of owner Mark Cuban, head coach Rick Carlisle, Dirk Nowitzki, and president/GM Donnie Nelson. While they’re not considered a frontrunner, the team was on his initial shortlist.

The Lakers were the last to meet with Dwight on Tuesday afternoon with a group that included owner Jim Buss, Kupchak, head coach Mike D’Antoni, Kobe Bryant, Steve Nash and a Time Warner Cable representative. Wait, what? Oh, well, in case you missed it, if Dwight signs with the Lakers he’ll get his own TV show on the TWC Lakers channel.

Phil Jackson was in Montana but tweetde a message to D12, as did Jeanie Buss, who was letting her brother run point on this. They said:

@dwighthoward “i’m going up to the country going to paint my mailbox blue.” While i’m there I expect to see you get on board tis ur place — Phil Jackson (@PhilJackson11) June 30, 2013

Following the meeting, Nash said it was “productive” and that he felt “positive” about it; D’Antoni said he’s “hopeful.”

After that, Dwight left in his Ferrari wearing a pinstripe suit jacket to get out of Los Angeles for a few days to make his decision.

Oh! And somewhere in between his Tuesday meetings, Dwight took the time to post this video from the agency that represents him, Relativity Sports, of him and John Wall speaking Mandarin.

This is very important stuff people!

Well, it actually isn’t, but it’s funny and will probably make you want him to sign with the Lakers so that Time Warner show happens:

There are pros and cons to all of his offers, especially when the California vs. Texas tax laws come into play. Obviously, if Dwight doesn’t re-sign with the Lakers, a sign-and-trade with any team would be best for him and the Lakers so that he gets the most money possible, and the franchise gets something in return for him.

It’s also heartening that Dwight plans to make his decision in a couple of days, rather than dragging this out over the entire offseason. Cross fingers, Lakers fans!