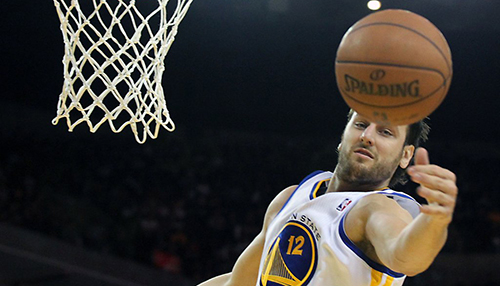 While we slog through Dwight Howard’s “Indecision,” remarkable only because he has managed to stretch the uncomfortable tension of Lebron James’ half-hour “Decision” over multiple seasons, we distract ourselves from the unbearable ambivalence by tunneling deep within speculation. In the spirit of sweet, sweet diversion, I present the next wave of trade rumors involving Howard, this time centering on our northern neighbors, the Golden State Warriors.

Last time we covered the Los Angeles Clippers’ offer – a scenario made irrelevant by Howard’s fickle interest and the Clippers’ other roster moves – and looked at a central package of DeAndre Jordan, Eric Bledsoe and Jamal Crawford; Jordan rounds out the paint rotation, Bledsoe provides young athleticism, and Crawford sparks up the bench.

The Warriors offer a similar set of skills, but the individuals involved are arguably more refined. Andrew Bogut, the oft-injured center and centerpiece of the deal, plays like Jordan with a dramatically higher ceiling. With an arsenal of actual post moves, strong passing ability, and a similar tenacity on the glass, Bogut fills the same role as Jordan while also registering as a legitimate offensive threat and self-reliant playmaker. His defense and agility aren’t as strong, but the upgrades outweigh the concerns.

Filling the role of a rising, energetic perimeter player left vacant by Bledsoe, the Warriors can tempt the Los Angeles Lakers with either Harrison Barnes or Klay Thompson, two young guns on reasonable rookie contracts with serious potential. We’ve seen less of Barnes, given that he’s only played one year, but both Barnes and Thompson showed strong upside and rose to the occasion during the Warriors’ playoff campaign. Drilling big shots, putting up some decent D, and carrying themselves with a swagger past their years, either would be a terrific addition to Los Angeles.

I’d say send over both to match up price tags, but I don’t think the Warriors front office puts mescaline in the water. Instead, to make up the salary discrepancy, the Warriors would likely send over an expiring contract like Richard Jefferson or Andris Biedrins, both of whom elicit an unenthusiastic shrug of acceptance. While they’ll give us a bit more bench depth, don’t expect anything spectacular.

Would this speculative squad outperform a Lakers team anchored by Howard? Probably not. Would there be less drama? Absolutely. Again, I want the #stay campaign to work as there is no center in the league I’d rather have alongside Kobe. That said, there’s a great deal of appeal in a fresh start, accepting last year as an unsalvageable failure and moving on.

We can predict all we want, but the decision is ultimately Howard’s, not the Lakers’. The fate of Lakers Nation rests in Howard’s comically oversized hands; will he crush us by bolting in free agency or cradle us with a long-term commitment? Best of luck staying sane until the resolution, I recommend dreaming up a trade scenario with the Minnesota Timberwolves in the meantime.