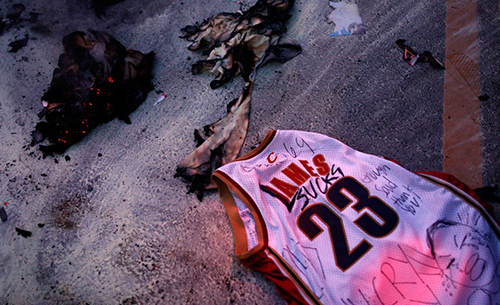 Any basketball fan who has viewed a Miami Heat game in a public setting in the past three years has heard this phrase spoken multiple times, usually followed by heads nodding in agreement. But why? James seems like a nice enough fellow. Uh… he’s cocky. Well how about he’s universally regarded as the best basketball player on the planet right now? Yeah, after he took the easy way out and moved to Miami. To say the criticism derives from the mere fact that he’s so talented (haters gon’ hate) is too simplistic, so we must delve further.

In order to understand the ever-present tidal wave of hate and backlash directed towards the NBA superstar, we must go back to where it all began. It’s no secret that the majority of basketball fans around the world that don’t reside inside the 305 area code decided LeBron entered “villain” territory on the night of July 8, 2010 when he infamously (and very publicly) announced that he would be leaving the Cleveland Cavaliers to “take my talents to South Beach.”

Ok, I get it, “The Decision” was not the best way for LeBron to handle the delicate situation of informing the fans of his hometown market that they should start seeing other people. Cleveland fans felt betrayed on what would prove to be a personal level and understandably so. Did he need a 75-minute primetime special on ESPN when a simple press release would have done the trick? Imagine if someone slept with your girlfriend, and if that wasn’t bad enough, the guy goes on television and announces it to a live audience of 13.1 million. Yeah, it was that bad.

But who is really to blame for the bitter separation between the two? And why did this single move determine how America and the rest of the world perceived the gifted athlete? Countless NBA stars have switched teams under similar circumstances with their integrity and reputation intact. In fact, LeBron actually ripped a page out of Kevin Garnett’s playbook, as Garnett decided a few years earlier to end a 12-year relationship with the Minnesota Timberwolves and move on to the greener pastures of the Boston Celtics. After Garnett’s immediate success of winning his first championship ring, it didn’t seem like such a terrible move. Garnett made a clean escape from a mediocre, small market franchise that was built around him and moved to a major market with a winning history, but LeBron was not so lucky.

“But that’s different, LeBron was our hometown hero! We went to his high school games!” This sentiment that seemed to be a recurring point of conversation in the summer of 2010 exemplifies the problem with the attitude of the Cavalier’s fanbase; the absurd notion that LeBron James actually owed them something. When you look at LeBron’s career in Cleveland, the only significant feat he failed to accomplish during his seven-year tenure was winning the NBA Championship. Admittedly, this is a valid point of criticism, but if Cleveland fans were angry at everyone that didn’t win them a championship, they would have to hold a grudge against every person born since the Cleveland Browns captured the NFL Championship way back in 1964.

Instead, focus on what he did accomplish for the city and the franchise while playing for the Cavaliers. Don’t dwell on his two regular season MVP awards or the ill-fated trip to the NBA Finals. Instead, focus on the fact that after drafting him first overall in the 2003 NBA Draft, LeBron instantly made the Cleveland Cavaliers a relevant championship contender for the next seven seasons. Let that sink in for a moment, a high school kid single-handedly turned the Cavaliers from the league’s punching bag to a main attraction, literally overnight. During the span of 2003-10 the phrase “We gotta watch that Cavs game tonight!” wasn’t completely laughable.

So the overbearing weight of the eternal heartbreak of an entire city rested on the shoulders of an 18-year-old kid with a big smile. The fans were essentially sending a message of “Hey I know you were in high school last year, but you have to win us a championship or we’ll publicly burn your jerseys and raise our children to hate you. Oh, by the way, we know you love your high school sweetheart, but here’s $90 million and unlimited power and social stature… try not to screw up!” Objectively speaking, LeBron handled his meteoric rise to superstardom and unimaginable wealth smarter and more responsibly than 99% of his peers could ever hope to do. Nevermind that he has avoided being tied to any off-the-court controversies, or that he is currently engaged to his aforementioned high school sweetheart and mother of his two children. The mere fact that he didn’t develop a cocaine addiction and tattoo his face a la Mike Tyson is impressive enough.

But wait, isn’t this the same athlete that Cavaliers owner Dan Gilbert described as “cowardly” and a “deserter” in an open letter to Cavs fans immediately following “The Decision”? Gilbert also offers up some parental advice to the fans as well:
This shocking act of disloyalty from our homegrown “chosen one” sends the exact opposite lesson of what we would want our children to learn. And “who” we would want them to grow up to become.

Talk about personal. According to Gilbert’s misguided logic, LeBron’s status as a positive role model was instantly diminished the moment he signed with Miami. That seems totally fair and not emotionally reactive at all… right? The fact that Gilbert followed this sentiment by brashly guaranteeing the Cavaliers will win an NBA championship before the Heat (a statement that seemed just as hilariously ridiculous then as it does today) and declaring that the infamous “Cleveland Curse” has now transferred with LeBron to South Beach. Let’s recap the bitter separation; LeBron makes a professional decision he was entirely entitled to (albeit poorly executed), and Gilbert radically declares James a coward, an unfit role model and casts a curse on him (no, really).

Three years have passed since LeBron sat in that chair on national television and decided that his career was worth more than public opinion. And who can blame him? Who handled the situation with more poise and honor, the jilted lovers of Cleveland or the superstar who bettered himself and his career? Either way, that night will be a moment never forgotten in NBA history, on par with “The Announcement” of Magic Johnson having HIV and the “Malice in the Palace,” the moment Ron Artest decided that assaulting fans was completely acceptable. Come to think about it, how is he still allowed to play in the league?

If LeBron’s image ever recovers is yet to be seen, but after winning his second championship this season, it’s pretty clear his game is where it needs to be, and Cleveland is not that place.