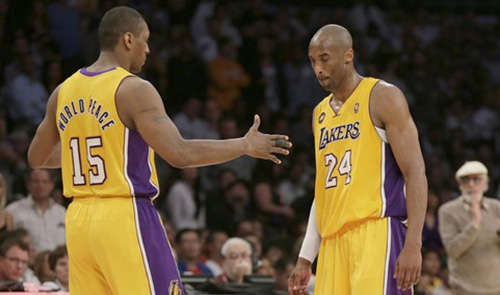 I am just pleased as punch to be a New York Knickerbocker. Not just because I get to come back home and play in Madison Square Garden, or that I get to play in front of those great Knicks fans, but because I don’t have to play in Shanghai. I didn’t even know that was a place until I Googled it, and guess what I found out? It’s in China. And dragons live there. I don’t want to have to come onto the court and fight a dragon. I’ve moved on from fighting, because I am an adult now and my therapist said fighting is “Counterproductive” and I agree with her, even though I can still get a little tempermental. She recommended that I keep a Pistons fan nearby so that when I get angry, or stressed I can punch it instead of taking out my aggression on “real people.”

When I heard that I got amnestied initially I was sad, but then later I reflected on how much playing in L.A. meant to me. I went up to Kobe with tears in my eyes, I hugged him and I said, “Hey man, listen. We have been through a lot these last couple years, and I just had to tell you how much you mean to me. You helped me grow as a man and I am eternally grateful for your friendship.” He was pretty shocked at how emotional I was, because he didn’t say anything for a minute or two. Then, Kobe, a man who is never at a loss for words looked at me and said “It’s 3:30 a.m. how did you get in my bedroom?” I just laughed because that is just so Kobe.

Poor Pau, I don’t know what he’ll do. He’s a wreck right now, because he really has grown quite fond of me, and to be honest I’ve grown partial to him as well. When I told him that I was going away he asked when I’d be coming back home and it just crushed me. I told him that I have a new home now, but I’d still come see him whenever I could, but it’s not enough and we both know that.

On off days we would go to the ocean and make friendship bracelets. I have one that says “Forever” and his says “Para Siempre” which means “Forever” in Spanish. Sometimes we would go down Catalina and write haiku’s until the sun was just a memory of the day before, and then we would just fall asleep under the beauty of the California sky. But, all good things must come to an end. I told that to Pau, and he understands as much as he can. It will take some time I think, but this friendship is strong and we’ll make it through the storm.

It’s time for new beginnings. I am looking forward to embracing my new role in New York. I had a nice hour long conversation with Tyson Chandler the other day. He’s really a great guy and we have a lot in common actually. I’m really super excited to play with him, primarily on the defensive end of the floor, also we have plans to start a book club and our first book is going to be “The Sisterhood of the Travelling Pants.”

This is going to be a good year for me. I’m going to do well I feel. It’s a big change for me, but I can do it. I will do it, or my name isn’t Metta World Peace.