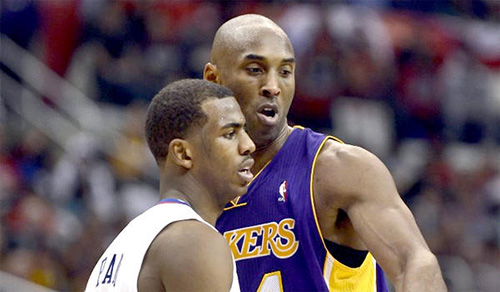 With apologies to Charles Dickens for the blatant plagiarization and all too inferior adaptation for these purposes, the preceding paragraph best describes the current fortunes of the Los Angeles Lakers and Los Angeles Clippers.

Except every pejorative description belongs to the Lakers.

In December of 2011, the Lakers acquired Chris Paul, ensuring the dynastic succession necessary to sustain a championship empire at the moment Kobe Bryant’s star began to fade. Only NBA commissioner David Stern scuttled the trade. The Clippers swooped in and the rest is Lob City history.

The recent history of Laker travails and Clipper ascendancy is the summer’s most compelling story. Tony Manfred of Business Insider posited that Stern’s intervention nearly 18 months ago is the singular reason the Lakers find themselves on the precipice of disaster. Manfred’s idea should make all fans consider the ramifications of Paul’s absence in purple and gold: Paul’s ability to create offense enhances Kobe’s game – at this stage of Kobe’s career his playmaking ability from the wing should be the Lakers’ primary source of offense, not the current format where Kobe dominates the ball from the 2. Furthermore, Manfred argues, the Lakers could have traded for Dwight Howard during the 2011-2012 offseason. The best argument for the Lakers having a Big Three of Kobe, Paul and Howard derives from the trades made – note that the Lakers created unique trade packages for the Paul and Howard deals below.

The Lakers also would have retained the trade exemption that was used on Steve Nash last summer.

The current state of the Lakers contrasted with the imagined state from December 2011 should cause nothing but consternation for Jack Nicholson and his gaggle of celebri-fans. Stern’s decision to void Chris Paul to the Lakers is widely believed to be the work of other owners exercising their stakes of Hornets’ ownership to cajole the commissioner into acting on their behalf. Stern took flak for succumbing to pressure, yet it’s important to remember that as commissioner he serves at the pleasure of the owners. NBA observers and their long-held conspiracy theories regarding the Lakers’ incredible run of good fortune during the Stern administration were simultaneously appalled and encouraged by the voiding of Paul’s trade. The disgust stems from the commissioner acting as de facto dictator of the NBA instead of custodian of the game’s best interest and the affirmation due to the Lakers being penalized – this is the same team that won Game 6 of the 2002 Western Conference Finals through circumstances most plausibly explained by Tim Donaghy (how else does Kobe get away with the flying forearm applied so judiciously to Mike Bibby). The Lakers’ fortunes are fodder for conspiracy theorists positing Stern’s interest in featuring the marquee team from the nation’s second largest media market.

Besides the Clippers, the team most emboldened by the nixing of the Paul to Lakers trade is the Miami Heat. The Heat’s weak links are the point guard and center positions. A trio of Paul, Howard and Kobe dismantles any chance Miami has of winning multiple titles. LeBron James is a better all-around talent, but no player scores with menacing regularity as Kobe. There’s no player in the NBA viewing victory over LeBron as greater authenticating his legacy than Kobe – the five rings are more than Shaq and Tim Duncan and dwarf LeBron’s two. Paul’s destruction of Mario Chalmers and Howard’s humiliation of Miami’s insert-a-center would have created a Laker dynasty rivaling that of the Celtics circa-1960s.

Conspiracy theorists in South Florida might think Stern denied the trade solely to ensure LeBron’s legacy and they have evidence: Miami is a three-time Eastern Conference champion and two-time NBA champion. Kobe willed two Lakers teams ill-equipped to win in 2011 and 2012 to playoff relevancy, but his Achilles injury directly initiated the display of Howard’s inability to be the most important player on his team in moments of great pressure. The Lakers have light at the end of the tunnel, although it’s debatable if the cliché light is an oncoming train or true optimism. Steve Nash is the only Laker signed beyond 2014 (Nick Young has a player option); the Lakers cap room next offseason affords great flexibility attracting talent, yet all the personnel moves since the death of owner Dr. Jerry Buss betray a franchise lacking the certitude of direction provided by the impresario of Showtime.

Lacking direction is familiar to Clippers’ fans. Donald Sterling’s alleged obsession with racism and athletic failure render the Clippers as the joke of professional sports. The acquisition of Chris Paul immediately lent fragile legitimacy to Staples Center’s “other” team. Lob City proved entertaining, but after two playoff flameouts the Clippers prying of Doc Rivers from the Boston Celtics showcases Sterling’s desire to win and knowledge that the opportunity to eclipse the Lakers as the pre-eminent basketball franchise is fleeting. Locking up Rivers removed Paul from the free agent market. The Clips are spending this offseason adding the auxiliary talent necessary to compete for a title: the savvy veteran (Jared Dudley), deadly shooter (J.J. Redick) and bench agitator (Matt Barnes). The Clippers provide a great argument for Western Conference supremacy. Read that sentence again.

Everything the Chris Paul trade did to ruin the Lakers, created the opposite for the Clippers. Paul’s acquisition turned the Clippers into the NBA’s most entertaining team. Blake Griffin and DeAndre Jordan routinely graced SportsCenter’s Top 10 and YouTube is the repository of an extensive collection of Lob City highlights. The difference between entertaining and winning is the difference between the 2012-13 San Antonio Spurs and 2012-13 Clippers. Jordan and Griffin must add dimensions to their offense and defense; Rivers must take a team of disparate parts and unite them in pursuit of glory; Sterling must sign checks and offer no ultimatums or any other actions that should compromise the team’s ambition; Paul is certified as the franchise player.

Gary Sacks exercised due diligence with the summer’s haul; nearly every player acquired passes the character test (Redick can put questions to rest by having a season refraining from signing abortion contracts). Rivers navigated the turbulent waters of heavy scrutiny in 2008 by gaining the buy-in from Paul Pierce, Kevin Garnett and Ray Allen. Because the Big Three vigorously believed in “ubuntu” the rest of the roster conformed. Paul, Jordan and Griffin must follow suit and with Rivers coaching pedigree beyond reproach, the process can be easier than it was five years ago. The Clippers have most of their team signed past 2014, the biggest names available next summer are Ryan Hollins and Darren Collison – neither player appears too valuable to part with. Securing Rivers ensures the long-term viability of a championship contender residing at the Staples Center. Who knew the contender would be the Clippers?

It’s possible the voiding of the Paul-to-Lakers trade created greater parity in the NBA. That particular claim is impossible to prove or refute. The other fact that’s impossible to refute is the Lakers are appreciably poorer for having lost in the Paul sweepstakes. Maybe Kobe still ruptures his Achilles. Maybe the Lakers don’t trade for Howard. Perhaps the Lakers follow Howard’s wishes and convince Phil Jackson to roam the Staples Center sideline once more. The amount of variables affecting the Lakers staggering vault towards obscurity is infinite. The Lakers are in a bad place and losing Paul is the place to note the beginning of the end.

The Clippers see Paul as the end of their beginning. Founded in 1970 as the Buffalo Braves, the Clippers moved to San Diego before settling in Los Angeles. Tortured is too benign an adjective describing Clippers history. Paul’s arrival coincided with Griffin’s emergence; two marketable stars vault a team to relevance quickly regardless of franchise. The Clippers, synonymous with failure, now are the NBA’s most exciting team. Instead of fans shuffling to Staples Center to see an out of town team, fans gobble up (for Los Angeles) reasonably priced basketball tickets for the home team. The trade of Paul emphatically slams the door on the slapstick brand of basketball Los Angeles bears witness to when the Lakers purple and gold fails to adorn the floor.

Dickens’ seminal work used comparison to illustrate the duality of London and Paris. The most overt theme is resurrection. The hopes of Clippers fans have been attached to feeble fleeting messiahs of Danny Manning, Lamar Odom and Elton Brand. The fate of Lakers’ fans rested in capable hands of Kareem Abdul-Jabbar, Magic Johnson and Kobe Bryant. The Clippers have Chris Paul and Blake Griffin. The Lakers have a hobbled Kobe and old Steve Nash.