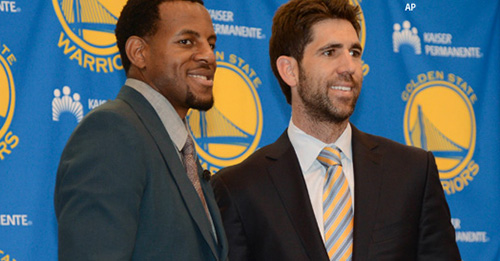 Conventional wisdom says that striking out on arguably the best center in the league would hinder a team greatly, but that might not be the case for the Golden State Warriors. When Dwight Howard chose to sign with the Houston Rockets, many thought that the Warriors would be left out in the cold after sacrificing much-needed depth to go after the free-agent center. However, Warriors general manager Bob Myers just turned to Plan B to put together one of the deepest teams in the Western Conference with the money they would have used on Howard.

After a playoff run where they lost in the second round to the San Antonio Spurs, the Warriors looked to the 2013 offseason to solidify their position as a contender in the Western Conference. Golden State had quite a bit of cap space and showed interest in players such as Andre Iguodala and Tyreke Evans. It was clear that the team wanted to make a splash. They did just that when they agreed to terms with Iguodala, signing him to a four-year contract worth $48 million.

Amidst rumors that they piqued the interest of Dwight Howard, the Warriors shed a ton of salary by trading Andris Biedrins, Brandon Rush, Richard Jefferson and two first-round picks to the Utah Jazz for Kevin Murphy. Many thought this deal meant that the Warriors secured a promise from Howard that he would sign with them. When the star center decided to go to Houston instead, the Warriors offseason became one that looks to secure the team firmly in the hunt to come out of the West for years to come.

The Warriors were able to turn the Utah deal into a three-way sign-and-trade deal for Andre Iguodala, with Randy Foye going from Utah to Denver to complete the deal so they could keep their mid-level exception and financially flexibility. In doing this, Golden State was able to sign veteran center Jermaine O’Neal and point guard Toney Douglas. This gave them much-needed depth at two positions where options behind the incumbent starters, Stephen Curry and Andrew Bogut, were thin.

The Warriors weren’t done wheeling and dealing yet, though. The team engaged in a sign-and-trade of Jarrett Jack to the Cleveland Cavaliers, taking back power forward Marreese Speights, bolstering their bench once again. Shoring up the backup power forward position was a need for the Warriors, as Carl Landry, the team’s former backup, left to sign with Sacramento.

These four players vastly improve their bench and give the team some great pieces to go along with their star point guard, Stephen Curry. Couple this with their younger players, such as Kent Bazemore and Draymond Green, and the Warriors look to be a force to be reckoned with in the Western Conference.

Bob Myers built this deep, strong team with the money it could have spent on one player. Even though it seems logical to go after the “big fish,” the team might be better off with getting a good amount of solid pieces and building around what they have in Curry. Only time will tell if this move is the right one for Golden State, but they look like a team that can make serious noise in the 2013-14 season.