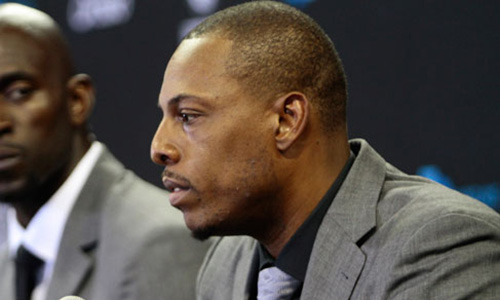 It seems an indeterminate amount of time has passed since we learned of the trade sending you to the Brooklyn Nets with Kevin Garnett and Jason Terry; since we saw the press conference with you holding that foreign cloth bearing your surname and trademark No. 34; since all that we knew of the Boston Celtics for 15 years became no more.

Yet, roughly six weeks after your voyage to Brooklyn became common knowledge, one fact remains for Celtics fans: you are ours, and we are yours.

No amount of distance in standings, city or age will ever alter that. There are so many memories: the 1998 NBA Draft, when nine teams concluded the draft board contained better options and you became ours with the 10th pick, the comeback in the 2002 Eastern Conference Finals, the too-many-to-count buzzer beaters, herky-jerky drives resulting in the and-one free throws, the inexplicable bandage incident, Game 1 of the 2008 NBA Finals, NBA Finals MVP, No. 17, “the Captain and The Truth”. However, it’s best probably to start with the stabbing.

We know you’d rather not re-live it, and we’re sure you’re aware of our feelings, but we were frightened. Not only because a couple of low-life animals plunged a knife into your body 11 times, but we invested in you. You were the Next One, the successor to Larry Bird that Len Bias and Reggie Lewis should have been. They were stolen from us; your toughness refused that fate. You started every game that season. That trademark defiance of all limitations was revealed to your fans that night. You never said it, but the lesson from that incident is that it’s in every person’s hands to define their life, not be defined by incidents in their lives.

You would be defined though. In March of 2001, Shaquille O’Neal pulled a Boston reporter aside and dictated the following, “Take this down. My name is Shaquille O’Neal, and Paul Pierce is the [expletive] truth. Quote me on that and don’t take nothing out. I knew he could play, but I didn’t know he could play like this. Paul Pierce is the truth.” Celtics legends and their nicknames whisper from the rafters of the Garden: The Houdini of the Hardwood, Russ, Loscy, Hondo, DJ, Cornbread, Larry Legend, The Chief, The Black Hole and one day The Truth will join them. No other nickname could ever suffice—you always let us see you as you are. Pierce the shot-maker, Pierce the defender, Pierce the Captain. For better or for worse, there was never any faking from you.

The comeback against the New Jersey Nets is our first experience with you in big moments. Down by 21, you and Antoine Walker engineered a great moment in Celtics lore—at a time when great moments in Celtic history were similarly commonplace as spotting a white rhinoceros in the wild. We know the Nets won the series, and the comeback is seated rightfully next to every great Celtics memory. The years would progress and great moments would prove elusive. You plugged away. Scoring, all the time. Imploring your teammates to be greater than they were. Always striving for greatness no matter how daunting the foe.

That’s why the “bandage” is an anomaly. It’s why, like any deep, intimate relationship such as yours with us, the troubled times are rougher than they seem. You were frustrated, competitive, and pushed past your breaking point. We reacted poorly; columnists lambasted you, we started to talk ourselves into the idea of you playing for another team. The time after the 2005 NBA Playoffs was awful. Then Red Auerbach died.

The 2006-07 NBA season was not memorable. Red’s passing broke the last link to the Celtics’ storied past. He embodied everything that made the team unique—a winner, curmudgeon, brash architect, loyal, and, of course, the physical embodiment of confidence. You told us that you wanted to retire a Celtic, how much it means to wear the green and play in the Garden. You forced Celtics fans to recognize that you were the link to the past and played out of your mind on bad teams. You made us hopeful that the best was yet to come, and Red’s passing signified the end of one era, but you struck out and created a new era of Celtic greatness … with a little help from your friends.

The tank job in 2006-07 was especially degrading in light of Red’s death. Danny Ainge got you help. That year our computers were covered in the “Boston is a Brotherhood” desktops featuring the original Big Three; sitting next to you, Kevin Garnett and Ray Allen. There is a generation of Celtics fans too young to appreciate the great teams of the 1980s and the tragedies of Bias and Lewis. That generation’s greatest memory could be you getting carried off the court and a few minutes later hitting the shots that changed the tide of Game 1 against the Los Angeles Lakers. You are the reason people now say that Willis Reed pulled a Paul Pierce.

You did it again—The Comeback II—Game 4 of the 2008 NBA Finals. Down by 24, you paced the team’s furious charge. We remember you walking down the tunnel, popping your jersey yelling “ONE MORE, LET’S GO Cs!” You became ours, and we became yours long before that moment, but if it’s possible for a player and a fanbase to recommit themselves standing on the precipice of greatness, that was it. Game 6, The Blowout. It’s fitting that you dumped the Gatorade on Doc. Many remember Kevin screaming to the heavens that “Anything is possible!” and we remember you receiving the Bill Russell Trophy for NBA Finals MVP and the joy of bringing No. 17 to Boston. All of us, the wanna-be athletes, rejoiced because your reaction and giddiness was the same as ours. You toiled in near-obscurity for 10 years and then received your reward.

The new Big Three was basketball the Celtics way. It didn’t matter that the only title came in 2008. The teams that you were on and the tenacity with which the game was played created a new era in Celtics lore. The series against the Chicago Bulls was probably some of the best playoff basketball, then there was The Comeback III, where you, Kevin and Ray dismantled LeBron James with ruthless efficiency that James cited your Celtics as the reason he had to flee Cleveland and take refuge with other NBA All-Stars in order to win. Your spirit buoyed these teams and the 2010 squad makes a great case for toughest Celtics team ever. It’s possible that Kendrick Perkins’s injury and Kobe’s sizzling 6-for-24 performance conspired to end that season on a sour note, but more importantly, your team played the game the right way. The defense was suffocating. You, Kevin and Ray allowed Rajon Rondo to blossom and become a star. The Celtics from 2008 to 2013 were everything that is right about basketball. At the end of 2013 you own a handful of Celtics records, and the only Celtic to score more points than you is Hondo.

However, life is impermanent. Monuments take on new meaning over time, and you are no different. The Celtics’ crossroad, a decision point put off for a few years, finally reached the limits procrastination allows. You wanted to be a Celtic for life. If you were, the next few years would be an insult to who you are. The rebuilding, the taking of lumps with a young team—you don’t deserve that. You deserve another chance to win, and it doesn’t matter where that chance is. We’re glad that Kevin is going with you. We know this journey means that technically the bond between us is torn asunder, but it’s not. You are ours, we are yours.

For now, we root for you. The time is for you to lead Brooklyn to glory, and Brooklyn is well aware that you are on loan just like a famous work of art is on loan to a museum. There will be strange times—your first game against the Celtics in Boston, the first playoff series win wearing black and white, the uncomfortable familiarity when you walk through that door again to sign a one-day contract to retire in green and white.

No adequate preparation for these realities exist.

“Souls that have toil’d, and wrought, and thought with me—
That ever with a frolic welcome took
The thunder and the sunshine, and opposed
Free hearts, free foreheads—you and I are old;
Old age hath yet his honour and his toil;
Death closes all: but something ere the end,
Some work of noble note, may yet be done,
Not unbecoming men that strove with Gods.
The lights begin to twinkle from the rocks:
The long day wanes: the slow moon climbs: the deep
Moans round with many voices. Come, my friends,
‘Tis not too late to seek a newer world.
Push off, and sitting well in order smite
The sounding furrows; for my purpose holds
To sail beyond the sunset, and the baths
Of all the western stars, until I die.
It may be that the gulfs will wash us down:
It may be we shall touch the Happy Isles,
And see the great Achilles, whom we knew.
Tho’ much is taken, much abides; and tho’
We are not now that strength which in old days
Moved earth and heaven; that which we are, we are;
One equal temper of heroic hearts,
Made weak by time and fate, but strong in will
To strive, to seek, to find, and not to yield.”