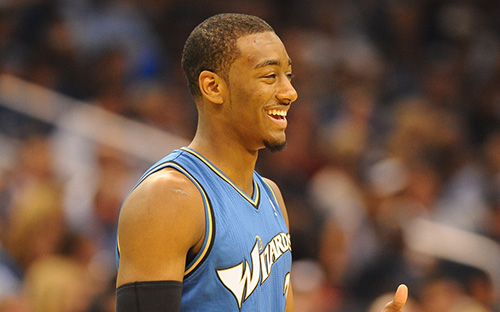 “We haven’t been to the promise land of winning a championship for years. I know we are a long way from there, but that’s my main goal before my career is done is to win one here.”
– John Wall

Wall joins guards Derrick Rose, Chris Paul, Deron Williams, and Russell Westbrook as point guards to earn a maximum contract. Wall believes he is the best point guard in the NBA, and maybe his max deal is proof. But was the contract based on the expectation of Wall’s game, or because of past performance? Let us examine and compare Wall’s contract to D-Rose, CP3, D-Will, and Russ’ respective contracts and determine the answer.

ANALYSIS
John Wall’s stats resemble the other point guards in FG%, FT%, and APG. Most of these point guards are scorers, which Wall resembles averaging almost 19 points per game. His contract was given at a young age similar to D-Rose and Russ. Wall might not have the same merits as the other point guards, but did lead the Wiz to finish the season 24-25 after starting 5-28. He too has been participating in the Team USA Camp this summer in Las Vegas.

Without a doubt John Wall is the franchise player of the Wizards and his max contract seems to be a combination of potential and past performance. He was the top overall pick in the 2010 NBA Draft, immediately becoming the prime building block for the team, and averaged career bests last season in points and FT%. The day the Wizards drafted him they wanted to build the team around him. John Wall has his eyes on success, and is positioned for a breakout season this year in the NBA.