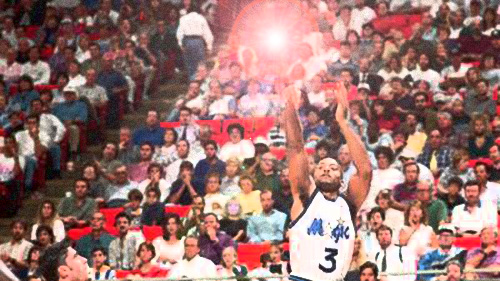 1. Dennis Scott (1991-1997)
The leading three-point shooter in team history checks in first for small forwards. Dennis Scott or “3D” was one of, if not the deadliest three-point shooter the team has ever seen. During his tenure in Orlando, the sharpshooting Scott found himself inside the top four in three-point field goals made three separate times. Scott shot a respectable 40.3 percent, which placed him ninth in the league in three-point field goal percentage during the 1992-93 season. Scott was never a superstar, but was one of the better role players the team has seen, which is what lands him on this list.

2. Hedo Turkoglu (2004-2009, 2010-current)
When Hedo Turkoglu’s name comes up now you think “overpaid.” A mere five years ago, the Turkish point-forward was a key cog in the machine for a Magic team that went to the 2009 NBA Finals. Turkoglu saw some of his most productive years in a Magic uniform, including the 2007-08 season that saw him take home the NBA Most Improved Player award. Though his second stint with the team has been very lackluster, the Turkish playmaker has and will always be a fan favorite for the Magic.

3. Grant Hill (2001-2007)
“What could’ve been….” That about sums up Grant Hill’s tenure in Orlando. After making five NBA All-Star teams with the Detroit Pistons, Hill made the trip down south to join Tracy McGrady in Orlando. While the Magic had high potential to become one of the best teams out east, the injury bug had other thoughts. Hill was only able to find the court in 200 out of a possible 574 regular season games with the team. However, when Hill was able to find the court, he was one of the team’s most productive players. Though he struggled to find the court, Hill’s work in the community and productivity when he was on the hardwood gets him on here.

4. Mickael Pietrus (2008-2010)
After five seasons with the Golden State Warriors, the French national took his talents east to join the continuously improving Magic. Pietrus came in and brought a tenacious perimeter defender to the team who relied on Dwight Howard’s post defense more often than none. The hard-nosed, hard working Pietrus had defensive win shares of 2 and 2.5 in his two full years with the team. Pietrus helped slow down star forward LeBron James just enough in the Eastern Conference Finals to allow the team to make their second trip to the championship series. Even though he did not contribute much offensively, averaging a mere 9.4 and 8.7 points per game, Pietrus’ tenacity on defense was undeniable.

5. Trevor Ariza (2006-2007)
From second round pick to starting on a championship team, to finally being a part of a rebuilding team, Trevor Ariza has been through it all in his NBA career. Ariza arrived in Orlando in the trade that sent Steve Francis to the Big Apple to play for the New York Knicks. While his stint in Orlando was short, Ariza took advantage of his playing time. From rim-rocking thunderous dunks, to tenacious defense, Ariza brought the grit and grind that the team needed. His time was short, but his play on the court spoke for itself more times than not.