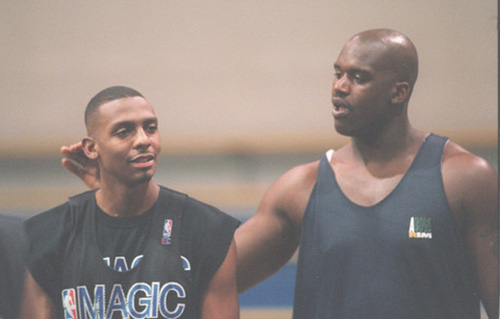 In this series, Sean McCabe will pick the top five players at each position, as well as coaches, that ever did it with the Magic.

The Orlando Magic are currently all about the future. But it never hurts to look back at a franchise’s past. The Orlando Magic went into the NBA as an expansion franchise back in 1989 and since then have given the league some of its true superstars – Shaquille O’Neal, Anfernee “Penny” Hardaway and Dwight Howard).

I love making all-time franchises on NBA 2K(soon to be 14) and it got me thinking… who is on that Magic all-time roster? First things first, we need someone to run the point. But who? Time to make a list.

1. Anfernee “Penny” Hardaway (1993-1999)
I think people have forgotten just how elite of a player Penny was before knee injuries destroyed his promising career. At 6’7″, he was almost as tall as Magic Johnson and just about as explosive as Michael Jordan. His point guard skills, matched with Shaq’s down-low dominance, led a young Magic team to the 1995 NBA Finals. Hardaway’s best year was probably in 1996, when he averaged over 21 points per game, to go along with seven assists and five rebounds per game.

2. Scott Skiles (1989-1994)
We might think of Skiles now as a scrappy, bald-headed NBA coach, but he was once a scrappy, balding NBA point guard. In 1989, Skiles was selected by the newly-formed Orlando Magic in the NBA expansion draft. He was pretty good for Orlando. So good in fact, that he holds the NBA record for assists in one game (30)! Once Penny Hardaway was drafted, Skiles’ days in Orlando were numbered. I heard he got into a fist fight with Shaq once… damn, I wish someone had footage of that!

3. Jameer Nelson (2004-present)
He has been the whipping boy for Magic fans for years now, but Nelson is a pretty decent point guard. You could do a lot worse than him and many teams do. Jameer is the all-time assists leader in Orlando Magic history. When the Dwight Howard-led Magic started to become title contenders, Nelson was a major reason why. Nelson averaged 16.7 points per game and 5.4 assists during the 2008-09 NBA All-Star season, but it was cut short due to an injury. To make matters worse, his replacement Rafer “Skip 2 My Lou” Alston played well enough to help guide the Magic to the NBA Finals. Ouch!

4. Darrell Armstrong (1995-2003)
Okay, maybe we are reaching here, but Armstrong was always a trusty spark plug off the bench. He also had great hops for a guy his height (only 5’11”) and he always seemed like a good court general. He’s third all-time in Magic assists.

5. Brian Shaw (1994-1997)
Shaw only played for the Magic for three seasons, but as a backup PG, he was an important piece for those mid-90s title runs. He could always be counted on making the right pass to Shaq, or spotting up for a clutch three-pointer whenever The Diesel was double-, even triple-teamed.