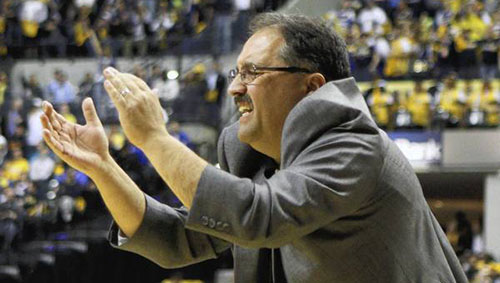 While the players get much of the coverage from the media, possibly the most important part of a team is its coach, the mastermind behind the scenes, working on and tweaking every little thing to make the games go as smoothly as possible. In the organization’s brief 24-year history, the Orlando Magic have had their fair share of coaches—nine to be exact. However, only five can make this list. So who makes the cut and why?

1. Stan Van Gundy (2007-12)
The team’s winningest coach checks in first. Van Gundy, who was in Sacramento interviewing for the Kings job when he faxed in his signed contract with the team after Florida Gators basketball coach Billy Donovan got cold feet, helped lead the team to some of its most successful seasons ever. The Van Gundy-led Magic won 52 games or more in four of his five seasons with the organization, won three straight Southeast Division titles, made it to the Eastern Conference Finals in back-to-back seasons and enjoyed its second trip to the NBA Finals. Never short of words, always witty and a defensive mastermind, Van Gundy earned the hearts of many Magic fans in his short tenure with the team.

2. Brian Hill (1993-97 and 2005-07)
A key part of Magic history, Brian Hill gets his spot on the list here at number two. While Hill may not have been the team’s most popular coach, being run out of town by the team’s superstar twice, he was able to be very successful in his time in the Orlando. In his six and a half seasons with the Magic, Hill took the team to the NBA Playoffs four times, including the team’s first NBA Finals appearance in 1995. Hill’s 285 wins place him in second all-time for the team, a mere five wins behind the aforementioned Van Gundy. While Hill’s breakups with the team were less than smooth, he was clearly one of the top coaches the organization has seen thus far.

3. Doc Rivers (1999-2003)
After three years as a broadcaster, Doc Rivers turned to coaching. His first head coaching job? The Orlando Magic. In his first year with the team, Rivers won the NBA’s Coach of the Year award, after beating all odds and almost landing the “Heart and Hustle” Magic in the playoffs. The next three years the Magic made the playoffs under Rivers, but were a first-round casualty each season. The former All-Star guard was relieved of his coaching duties just 12 games into the 2003-04 season after a tumultuous 1-11 start. The team went on to lose eight more games before finally defeating the Phoenix Suns. Rivers’s time in Orlando helped pave a road to a very successful coaching career, and his achievements in Orlando are nothing to look down on.

4. Chuck Daly (1997-99)
An inductee of the National Basketball Hall of Fame, Daly is most famous for leading the Detroit Pistons to back-to-back titles. However, Daly would later go on to coach the Magic, which ended up being his last head coaching job in the league. In two years with the organization Daly accumulated a .561 winning percentage, putting him fourth all-time for the team. During the lockout shortened 1998-99 season, Daly led the Magic to a 33-17 record, good enough for first place in the Atlantic Division, but the team was bounced in the first round of the playoffs. Daly’s most prestigious days were before his short time with the Magic, but his winning mentality helped get him on this list.

5. Matt Guokas (1989-93)
The team’s inaugural head coach and former TV analyst finishes up the list. Even though Guokas’s run as Magic head coach was not as successful as his run in Philadelphia, where he made it to the playoffs in two of three seasons, Guokas’s impact is felt much further down in Orlando. Guokas helped build the team into the championship contender it became by the mid 1990s. His final season with the team saw him post his best record as coach, a 41-41 season, placing them fourth in the Atlantic Division. His time as the team’s TV analyst came to a surprising end after this past season, when the team chose not to renew his contract. A favorite among fans and writers across the league, Guokas will be missed in Orlando.