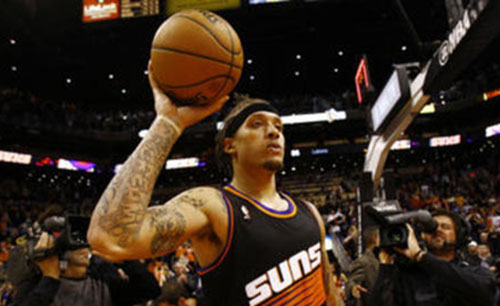 I am really starting to think that Michael Beasley misunderstood the phrase “high draft pick” when he was chosen second overall in 2008 by the Miami Heat.

For the third time in his five-year career, Beasley has found himself in trouble for possession of marijuana. Add in the fact that he has been on a different team each time he was caught, and it becomes easy to see why Beasley’s latest three-year, $18 million contract was considered to be a high-risk move by the Phoenix Suns.

Following his involvement in a weed-related fire alarm incident at the 2008 NBA Rookie Transition Program, which netted him a $50,000 fine from the league, Beasley attempted to lay low (or at least not get caught getting high) in order to stay in good graces with Miami. However, during the 2009 offseason Beasley checked into a Houston-area rehab center for undisclosed reasons (though his admittance came on the heels of a series of troubling tweets and a picture plainly displaying marijuana). After two seasons filled with problems, Beasley’s tenure with the Heat ended, and he was eventually traded to the Minnesota Timberwolves during the 2010 offseason. The trade looked to be a terrific investment for the T-Wolves as Beasley averaged a career-high 19.2 points per game during the 2010-11 season.

Any excitement that may have been built off of his successful season quickly went up in flames though, as he was once again charged with marijuana possession during the 2011 offseason. In this incident, Beasley was pulled over and found with 16.2 grams of weed. Upon the discovery of the weed by the officer, Beasley claimed that it actually belonged to a friend that he had just dropped off. This raises an interesting question: does Michael Beasley hang around with people who are actually a worse influence than himself? While it would be easy to dismiss Beasley’s claim as false, Baller Mind Frame’s very own Managing Editor, Frankie Lloyd, has come to the defense of Beasley after his latest arrest this week:

Just to be honest, Beas was holding for me. Go easy @NBA….

Cheap publicity stunt by us here at BMF, or ballsy confession proving just how cutting edge we may be? I will let you decide, but I will just be careful which colleagues I ride with in the future. I digress though.

Following that run-in with the law, Beasley had a disappointing 2011-12 season where his statistics fell across the board. In fact, the 16.2 GPA (Grams Per Arrest) in 2011 vastly overshadowed his 11.5 PPG. At this point, Minnesota had seen enough of Beasley and allowed him to join the Suns. Beasley entered Phoenix with high expectations, and even went as far as to say:

“I realize 10 minutes of feeling good is not really worth putting my life and my career and my legacy in jeopardy, so I’m confident to say that part of my career, that part of my life, is over and won’t be coming back.”

This moment is where I thought that I realized why Beasley had never reached his potential: he obviously has been smoking pretty bad weed if he only derives 10 minutes of enjoyment out of it. Good for him though, I thought. He was finally going to improve his pick-and-roll abilities and not just his rolling abilities, he could finally focus on taking it to the hole rather than taking it to the bowl and pay more attention to swishes rather than Swishers.

To be blunt, things didn’t go as expected. Beasley struggled through the worst year of his career last season. In addition to his arrest this week, he was also involved in a sexual assault case and was found to be speeding with a suspended license and no license plate earlier this year. None of this spells good news for Beasley, and many anticipate him to be on his way out in Phoenix. While that has yet to be seen, it looks as though it may be the correct move.

When you are a five-year NBA veteran, and the “Off-court issues” section of your Wikipedia is longer than the “Professional career” section, there might be something wrong.

If the Suns do decide to sever ties with Beasley, there may not be many teams willing to take a chance on him. Perhaps the Denver Nuggets or Portland Trail Blazers will see the comedic value in picking him up, but only time will tell. One thing is almost certain though: Michael Beasley is headed towards a change of scenery or a change of greenery very soon.