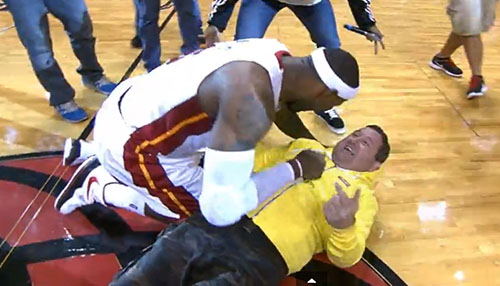 I must confess, when the halftime buzzer sounds I am usually the first to be in line for a watered down, overpriced beer and an overpriced, questionable hot dog. I say “questionable” because I’ve never seen any rats running around downtown D.C.

I’m really not used to the idea of halftime entertainment. At a soccer game in England, halftime usually involves watching groundsmen fixing patches of turf that have gone awry. Perhaps if this were timed or score was kept, I would be more inclined to watch.

I did see one NBA halftime show at the Verizon Center last year that featured dogs wearing socks and chasing Frisbees. Much hilarity ensued. During the first half of the game I could hear dogs barking and thought I was either going mad or DMX was trying to make a comeback.

As the new season approaches, I have trawled through the Internet to find some halftime gems:

Ah, the old Washington Wizards logo! This seems like a rather sweet and loving affair, with kids taking turns to line up and dunk a mini ball into a pint-sized hoop. We lead off with a kid falling over, something that is pretty funny in itself. One can imagine the disappointment in his parents’ eyes as that memory is forever etched into the small child’s mind; an anecdote that will be told every time a potential girlfriend comes over for dinner.

At the 0:45 mark, a solo alley-oop sends the fans into raptures! I sure hope he’s in the big leagues or at least playing college hoops by now just for that dunk alone.

Up at 0:58, watch the kid with the guitar on his shirt, a young Matt Damon if you will, try to live up to what he just witnessed. Damon pulls off a pretty respectful one-handed jam, but I think the kid in the black T-shirt served everyone.

No sweet kids falling over here, just a dog doing five back flips in a row. Do dogs not get dizzy? I guess not.
Highlights involve: an awkward silence in the studio when two dogs walk in a provocative manner with a “C’mon, man” for added displeasure, a dog hurdling on two legs faster than any NFL combine athlete has, and Shaq threatening to knock Charles Barkley out.

G-Man and Eddie on his phone

I really didn’t intend for this to feature any Wizards footage. Alas, here we are faced with G-Man—one of the Wizards’ mascots—and some willing audience participants in a dunk competition, with a trampoline added for good measure. How ripped is G-Man? Has he been tested for PEDs? The aptly named Trip is up first, and down he goes! Add in a custard pie on impact and you’re always guaranteed to cause a few laughs.

Eddie seems like he has been planted but I won’t hold it against him. He proves that people talking on their cell phone in public are not always annoying. By landing six flips, he also beat the dog in the above clip in a flip competition. Unfortunately, Eddie was disqualified for traveling.

Big G got the moves!

This clip wins the best soundtrack award. Spanning through the ages of music, Globie, the Harlem Globetrotter mascot, treats us to some fancy footwork, booty shaking and face planting, and somehow manages to dance on his head. Globie also assaults a referee. Who hasn’t wanted to headbutt a referee in a giant inflatable costume?

A fan gains a new fan

This is probably my favorite clip of them all. We’ve all felt the fork in the road moment when a player you either love or hate releases a shot from halfcourt, with seconds feeling like days, resulting in the ball swishing through the net sending your emotions to a painstaking low or euphoric high.

Imagine having that kind of pressure set upon your shoulders, with 15,000 people staring at just you, not a team of five, and one physical act standing between you and $75,000. After making the successful shot the fan must have been feeling so much elation he probably didn’t realize that one of the most talented players in sports history just tackled him to the ground in celebration. This was a cool move by James and it reminds that he is still, at the end of the day, human enough to feel such joy for a fellow human being.

Non-basketball related but still a great story to tell. A fan of a UK-based lower league soccer team, Macclesfield, paid $15,000 for the opportunity to fulfill a boyhood dream of playing in an exhibition match against Stoke City. His dream lasted nine minutes before an injury. Footage can be found here:

It got me wondering if something like this would ever happen in the NBA. How much would people pay to sub in and play alongside LeBron, Kobe or Durant?

Do you have a favorite halftime video? Share it below and let me take a look!