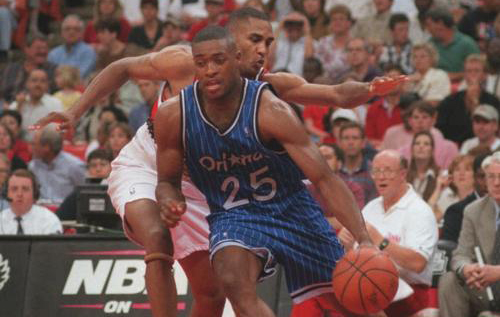 Over their first 24 years, the Orlando Magic have had their fare share of shooting guards. In this year’s NBA Draft, the team selected its shooting guard of the future with the second overall selection, Indiana University product Victor Oladipo. While the team has had some troubles finding a permanent option at shoot guard, it’s had its run with some great ones. The top five shooting guards in Magic history are…

1. Tracy McGrady (2001-2004)
In his four years in Orlando, McGrady dazzled fans not only with his ability to create and score from anywhere on the court, but also his high-flying dunks. McGrady was not just the superstar of the team, but was one of, if not the best player in the league during his time in Orlando. T-Mac led the NBA in scoring in back-to-back years, 2002-2003 and 2003-2004, and helped lead the Magic men to the NBA Playoffs in three of his four seasons with the team. In those three trips, the team never made it out of the first round, which hung over McGrady until he made the NBA Finals this season with the San Antonio Spurs. While McGrady’s breakup with the team was not pretty, his pure dominance and what he did for the team in his short tenure earns him the number one spot in team history.

2. Nick Anderson (1989-1999)
The team’s first draft pick, and potentially the team’s first official player jersey to be retired, Nick Anderson’s days in Orlando were ones to remember. Anderson was a fan favorite from day one and continues to be one with his work with the team in the community. Anderson spent ten of his 13-year career with the team and is currently a guest analyst on the team’s pre-game and post-game show. While Anderson never put up flashy numbers, he was consistent across the board during his tenure with the team. Everything that Anderson has done for the Magic and continuously with the community, gets him on this list.

3. Mike Miller (2000-2003)
From being the fifth overall pick, to winning NBA Rookie of the Year honors, Mike Miller’s short tenure with the team was a successful one. As the team’s second option behind Tracy McGrady, Miller proved himself to be a three-point shooting specialist. In his rookie season, Miller shot a respectable 40.7 percent from three and finished ninth in the league in three-pointers made. The Florida product has struggled to stay healthy throughout his career, playing all 82 games only once. Even though his time in Orlando was short, Miller was productive and was one of the team’s better shooting guards in its history.

4. J.J. Redick (2006-2013)
Coming into the league, J.J. Redick was considered just a shooting threat. In his first two seasons Redick struggled to get burn on the court, mostly appearing in garbage time of 72 games, then in the snap of a finger it all changed for the Duke product. Working day-in and day-out to better himself on each end of the court, Redick impressed coach Stan Van Gundy and found his way into the rotation on a regular basis. Redick turned himself into one of the most consistent shooting guards in the league through his time in Orlando, and had a huge impact in the community and with fans.

5. Jerry Reynolds (1989-1992)
A backup to Nick Anderson, Reynolds saw career years in Orlando. In his three seasons with the organization, Reynolds posted scoring averages of 12.8, 12.9 and 12.1 points off the bench. In his five other seasons in the Association, the LSU grad averaged no better than 8.0 points per game. While Reynolds isn’t the first name you think of when you think of the Magic, he took advantage of his time here and was solid.