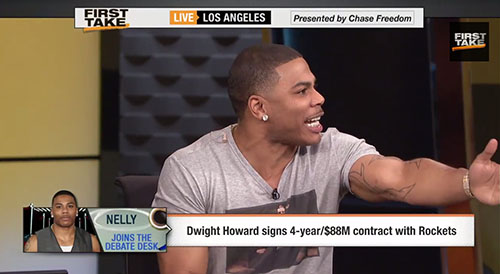 A few weeks ago, Nelly appeared on ESPN First Take with Stephen A. Smith and Skip Bayless, and I understand I’m a bit late on this. The debate about Dwight Howard, Los Angeles Lakers and Kobe Bryant was very interesting because Nelly questioned Kobe’s leadership, something unheard of! Not only that, Nelly goes on to say (and I’m paraphrasing) that the Lakers and its fans have spoiled Kobe Bryant. He also intimates that no one will want to play with Bryant because the respective player’s stats would go down, particularly in points. It’s an interesting take that I agree with to certain degrees, but the most impressive about the below video is how forthcoming and knowledgeable Nelly is about the NBA, stating his opinion strongly and fortifying said opinion with valid facts. It’s worth the 15 minutes to watch, particularly if you hate Kobe or the Lakers, especially.