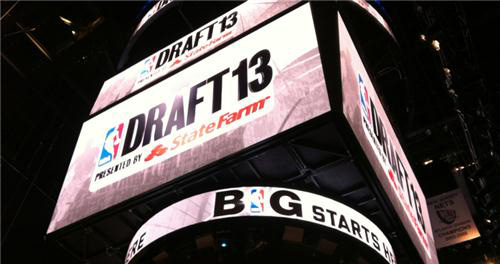 If I were an NBA rookie, I would…

10) Find my signature rapper buddy. Every savvy basketball player needs a rap game bud to pop bottles with at the club. Shaquille O’Neal and Biggie. LeBron James and Drake. Blake Griffin and Childish Gambino. Ron Artest and Nas. Kenyon Martin and Ludacris. Using a connection with Kendrick Lamar, Macklemore, or Earl Sweatshirt, I could use their influence as a leg-up into the best V.I.P. rooms, clothing line opportunities and even my own record deal. Because as Rick Ross says, “Rappers wanna be ballers, ballers wanna be rappers.”

8) Go support my new city’s other sports teams. Nothing endears a sports star to fans’ hearts like showing that you’ve truly adopted a new city.

6) Coin a catchphrase. Anthony Davis last year trademarked the phrase “Fear the Brow” before he even played an NBA game, and Jeremy Lin put a big old TM on Linsanity during his firestorm with the Knicks. So, be prepared to pay royalties for your “Lucky Number S-Evan,” “Seven Minutes in Evan” and “It’s Turissini Time” t-shirts, Adidas!

5) Do a very clever “This is SportCenter” commercial where Jay Bilas and I go birdwatching and get really into wingspan.

4) Get in a Twitter beef with the arch-rival rapper of my aforementioned hypothetical rapper buddy. That punk ain’t got nothing on me and my buddy Earl Sweatshirt/Macklemore/Kendrick Lamar/Dennis Velasco.

3) Trash a hotel room under the name Kris Humphries.

2) Go do some face time at charities around town. Giving money is great, sure, but what people really want to see are players saving puppies, digging ditches and ladling soup. That’s what you are to your cities now, rookies, you are their best faces. If you get arrested for killing a guy or dating a Kardashian, you both sully the name on the back of the jersey, and the front. Make good choices.

1) Give an exclusive interview to Baller Mind Frame. I mean, that’s how to do it right.