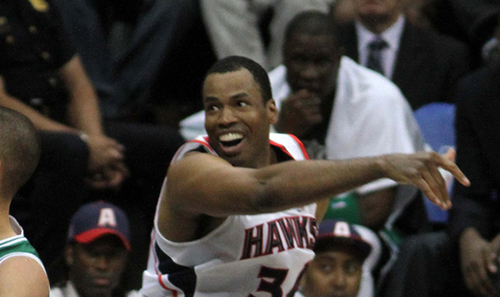 Jason Collins, fortunately and unfortunately, has become the NBA equivalent of Tim Tebow: not incredibly talented, devoted fanbase and has a very unclear and hazy future in his respective sport after having been cut by a Boston sports team. All he needs is the undying love of Skip Bayless and quote a few Bible verses (just, um, not some certain Bible verses, I guess). But with the season so close that you can taste the Pau Gasol flops and hear the whining of Amar’e Stoudemire, Collins still isn’t on a team, and his career could be over before the first openly gay NBA player sets foot on the court, and subsequently is heckled by a homophobic cab driver from Chicago.

The problem with Collins is not that he’s gay—it’s 2013, we’ve all seen an episode of “Glee” at least by accident—but rather it’s the media crapstorm that follows him around. Very few teams right now need more media scrutiny, whether on the rise (see: Brooklyn Nets, Cleveland Cavaliers) or exploding and crumbling (see: Boston Celtics, Los Angeles Lakers). Nobody wants to be the NBA’s New York Jets, which is kind of what the Lakers were last season.

But it’s not just about Collins’ sexual preferences, it’s what he’s known for. In Boston, Collins was sometimes referred to as the Howard Killer, for his fantastic ability to defend Big Dwight. Though there is some contention over whether or not this nickname was earned, but beyond that, as Dwight Howard has become increasingly easy to stop over the past few years, Jason Collins has become increasingly more useless. If, as I predict, D12 stages a revival with the Houston Rockets, Collins could have a few job offers by the trade deadline.